Whatever happened to Timothy Mo? 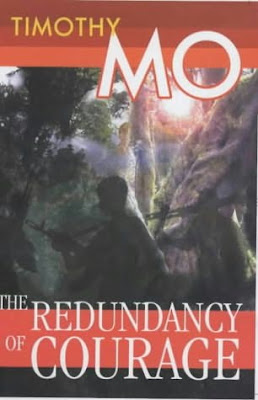 Earlier this morning I was reading DJ Taylor's book A Vain Conceit, his 1989 survey of contemporary British fiction. It's a wonderfully opinionated polemic which still hits a nerve 19 years on and mentions a number of writers who have faded into obscurity. Do the names Mervyn Jones, Helen Muir or Jeremy Brooks mean anything to you?

One name that I did recognise was Timothy Mo. He used to be mentioned in the same breath as McEwan, Ishiguro and Byatt and was shortlisted for the Booker Prize three times with Sour Sweet, An Insular Possession and The Redundancy of Courage. Then he made what was, perhaps, the greatest mistake of his career.

Allegedly fed-up with the practices of British publishers, he decided to cut out the middle man and self-publish his next novel, Brownout on Breadfruit Boulevard. It was viewed by some as a brave decision, but others felt that with Mo's track record, it could be a very lucrative one.

Sadly for Mo, self-publishing turned out to be a disastrous move. Perhaps the novel wouldn't have sold anyway - the title was pretty awful. However although the reviews weren't as enthusiastic as they had been for his last three books, they were still pretty decent and the book should have sold purely on the strength of Mo's reputation.

First, there was the jacket design. It was bloody awful and looked really amateurish. Second, however well-establish an author is, they don't have a marketing department that will ensure that the front cover of the new novel is plastered across dozens of tube stations. Third, Brownout on Breadfruit Boulevard was published just after the Net Book Agreement collapsed, making the book trade a tougher place for full-priced hardback fiction.

Mo self-published another novel in 2000, but since then he has remained silent. There is an author website, but it is a masterpiece of brevity and gives no clues about any forthcoming works to be published by the appropriately-named Paddleless Press.

Self-publishing has its success stories, but they are the exception rather than the rule. The demise of an author of Mo's stature is a sobering example of what can happen if you try to go it alone.
Posted by Steerforth at 8:26 am

A timely reminder. Well, not timely exactly, since as you point out Mo is nowhere to be seen these days, but amazing how quickly the literary hot stuff can congeal.

Actually it is timely, with the ever-growing ranks of self-published authors who think they can make it on their own and they haven't won awards and had earlier books published by big name houses.

Ladies and gentlemen of the jury, I refer you to Martin Amis's passages on vanity presses in his novel The Information which are too lengthy to reprint here but funny - and sad - as hell.

Um, have you read the opening paragraph of Brownout? - As the shower of shit rained down on him - as I remember it, is how it begins.

Ah yes, the notorious coprophilia element - it certainly put me off my marmite sandwiches.

That aspect of the novel was frequently mentioned in reviews, so maybe that had as much to do with the poor sales as anything else.

My Dad read Sour Sweet in the 1980s, and kept on talking about it for a few years afterwards. I think it's that one in which the police are memorably described as "official bandits".

I love Timothy Mo's work. Does anyone know what is happening now with his work?

That's a good question. His website gives very little away and he doesn't appear to have published anything for ten years - a great pity.

Perhaps he's just financially solvent and enjoying life too much to slave over another novel.

Must say, The Redundancy of Courage is one of the finest novels I've ever read, but the novel he published after Brown Out on Breadfruit Boulevard, with the equally unwieldy title Renegade, or Halo2, is also superb.

Isn't the point that no publisher would accept the'Brownout' novel because of the coprophilia?

To then create a company to publish it (I think it was that way round) called 'Paddleless Creek Publishing' is to push the joke too far. It put me off reading anything else by him; a shame perhaps.
Sour Sweet was electrifyingly good, as I remember.

I just posted about the mysterious case of Timothy Mo on Huffington Post
http://www.huffingtonpost.com/daniel-benhorin/timothy-mo-is-missing-tho_b_1209218.html

Brownout is quite a wonderful book, by the way.

Mo has a new novel out in April. Here's a quote from the Guardian:

Pure by Timothy Mo (Turnaround). The three-times Booker-shortlisted author of Sour Sweet has had a volatile relationship with publishers and editors, turning to self-publishing in the past. For his first novel in over a decade, set in Thailand, he's teamed up with a small London distribution company. The key attraction of his new publisher? He answers the phone: "None of this 'he's in a meeting', which is like 'your cheque's in the post'."