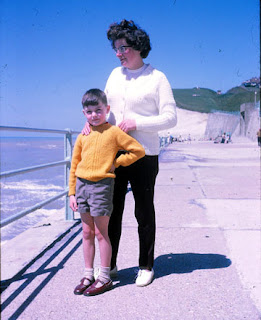 Thank you to everyone who posted such kind comments in response to my last post. I would have liked to respond to each individual comment, but I'm not firing on all cylinders at the moment.

The cremation took place this morning and went as well as I could have hoped. Everybody seemed to think that my mother would have been pleased with it. We read one of her poems, I read a tribute and during the time of quiet reflection, we listened to Abide With Me. There was also a second poem by a Mr Anon, which was so apposite I wondered if anyone would guess the author's identity.

At the end, I handed out roses to each person and they placed them by the coffin. Afterwards, someone came up to me and asked me where I'd managed to find such beautiful flowers. I didn't tell them that I'd spent £6 in Tesco the previous day.

The next post I write will be to give the name and web address of my new blog.

I will finish with a picture of my mother behind the till at Woolworths in Teddington, for Chris, who wondered if he'd seen her there. She worked there every weekday morning until 1990. My father thought that she should do something better, but the hours fittted around the school holidays and she wasn't too proud to work there. 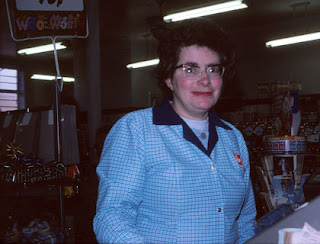 Next week, I will begin the long, slow process of dismantling a life, forensically going through every item in her flat: the reading glasses, tablets, walking stick, Werther's Originals, romance novels, Damart catalogues, old birthday cards from her family, certificates, framed cross stitch pictures, biscuits and unopened sets of notelets.

It will feel wrong, as if she is going to come back and ask me what I have done.
Posted by Steerforth at 9:48 pm 11 comments 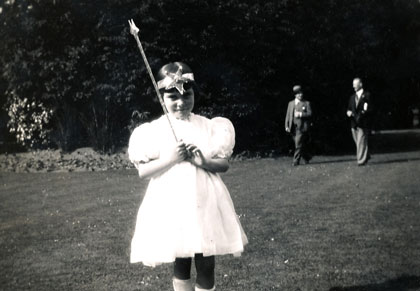 I had thought that The Last Post was the last post; on this blog at least. I'd set up a new blog on Wordpress and planned to make it more 'multimedia', beginning with a podcast featuring my mother and her friends talking about the day war broke out.

I wanted to record their stories before it was too late.

Sadly, it already was too late. My mother had a major heart attack ten days ago, but didn't realise what had happened and simply thought that she was unwell. By the time she was admitted to hospital, four days later, the damage to her heart was irreversible.

She didn't know that she was dying. During my last visit, only ten hours before her death, my mother asked me to bring a comb with me when I returned, as she was concerned that her perm was in a mess. I made a note to buy one the next day.

The hospital phoned several times during the night, but I was sound asleep and heard nothing. When I finally answered, a doctor told me to get there as soon as I could. I raced across the South Downs in the dark, jumping the traffic lights when there were no other cars. I arrived just in time.

My mother was asleep, with an oxygen mask over her face. The doctor didn't beat around the bush: "I'm afraid your mother is dying. I don't think it will be long. We've done everything we can to make her comfortable." The nurse stroked my arm and the doctor asked if we had any religious requirements. I shook my head.

The oxygen mask steamed up every time my mother exhaled. I noticed that her left eyelid was half open, but I had been assured that she wasn't conscious. I wondered how things could have changed so much over a few hours.

I took my phone out and sent a text to my wife to let her know what was happening. After pressing send, I looked up and noticed that the oxygen mask was clear. The nurse took my mother's wrist: "She's gone." A heart that had been beating continuously since 1929 had stopped. 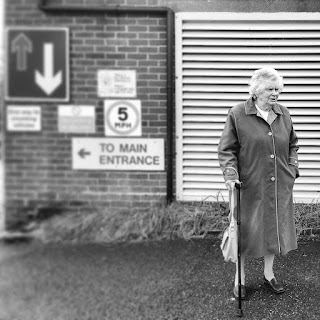 It was a shock, but also a relief. My mother had died a peaceful, dignified death, blissfully unaware of what was happening to her. If she'd lived, she would have had a pretty awful existence, needing help with even the most basic tasks. She had always dreaded ending up in a home or 'going potty' and selfishly, I dreaded it too.

In spite of decreasing mobility, my mother had led a pretty active life right up until the end. She spent her last two weeks hobbling around the streets of Lewes, determined to get one of the new plastic five pound notes. I don't know why she was so excited by them, but it became something of an obsession.  Sadly, she didn't find one.

I felt that I had to write this post, as I have written about my mother so many times and didn't want to leave out the end of the story.

I have just started to receive cards through the post. Whenever I see the phrase "passed on", I silently cringe, partly because my mother hated it so much: "They haven't passed on; they've died," she would always say. I'm not sure why it made her so angry, but perhaps growing up surrounded by death, during the London Blitz, gave her a contempt for the coyness of the modern age.

People are being very nice to me, saying how shocked I must feel, but my overwhelming emotion is one of gratitude that my mother lived as long and as well as she did. I've witnessed some pretty horrible deaths over the years and it was a huge relief to see my mother die peacefully. 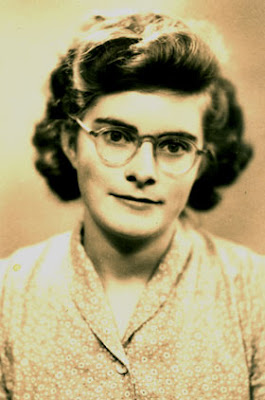 At some point, I hope I'll be able to write something about my mother's life, but for the moment this is as much as I can do.

I will post a link to the new blog when it's ready.
Posted by Steerforth at 12:51 pm 34 comments