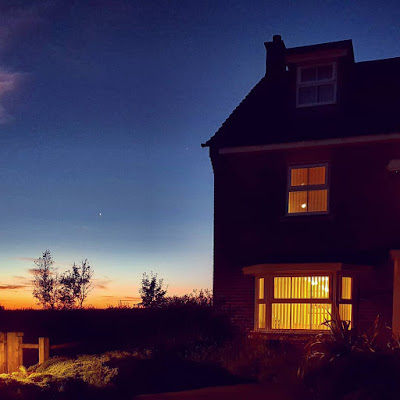 For part of the 1970s, London-based viewers of the TV soap 'Crossroads' were six months behind the rest of the country. I can't remember why, but I do recall that part of the excitement of going on holiday was being able to watch an up to date episode. It was like travelling into the future.


As with all good time travel stories, I was shocked by some of the things I saw. Why was Sandy in a wheelchair? What had turned Amy Turtle into a common thief? Where was Ted Hope? How could so much happen in six months?

In the end, Thames Television decided to catch up with the rest of the UK and a special update was filmed, with motel owner Meg Mortimer explaining what had taken place in King's Oak.

As it's been a long time since I've written a blog post, I thought I'd emulate Thames and provide a brief update of what's happened here.

When my mother died, I'd hoped that we'd finally have the opportunity to swap our terraced Victorian broom cupboard for a decent-sized house in Lewes, where I could hide from people and everyone would have the space to potter around. By decent, I mean normal; a three-bed semi with a garage and a garden longer than 20 feet.

Sadly, I soon realised that my small inheritance wouldn't even cover this modest ambition, as the prices for non-terraced houses suddenly shot up. Disheartened, I began to think the unthinkable: leave Lewes.

Long story short: we now live just outside Lewes, in a detached house with a view of the South Downs. Thanks to postcode snobbery, it was almost exactly the same price as our old house. I love it.

2. I Am No Longer Gainfully Employed

In a normal family, my older son would probably be at university by now or in full-time employment, while his younger brother would be going to the local school and hanging out with friends. None of this has happened. Instead, I have gradually become a full-time carer to both boys, home educating the younger one.

There are two types of people who home educate their children: those who want to and those who have to. I am firmly in the latter camp and would far rather be working. For all its frustrations, work brings camaraderie, a sense of purpose and, of course, money. At the moment, my time is spent almost entirely at home, as neither boy likes going out.

After six months of this, I started to go a bit stir crazy, so my wife very kindly suggested that I went off on a little jaunt somewhere. This turned out to be a very good idea and I am now making full use of EasyJet's cheap flights. Visiting a city like Berlin certainly clears away the cobwebs and stops me feeling that my life is in a complete rut.

As for the home education, although I may be a reluctant teacher, I am trying my best to ensure that my son has a thorough grounding in the basics, but is also free to follow his enthusiasms and passions. Sometimes we'll read a book together, but at others we might watch a film or YouTube clip and discuss it.

So far, my son seems to be enjoying his lessons and is much happier than he was this time last year, so I'm quietly hopeful.

It can be hard to maintain a positive outlook when you see your loved ones struggling. I feel haunted by the ghost of the carefree childhood that my older son never had. I have been assured by professionals that we did all the right things, but it is hard not to experience a residual feeling of failure. We do not bring children into the world to suffer.

On gloomy, winter days, I wonder if this is it. Will I work again? Will my sons ever find their way in life and if not, what will happen when we are old? Will I even make it to old age if I live a life where I rarely get any exercise, because my son won't go out but doesn't like being left alone?

Of course it's ridiculous to think along these lines and when I worked, I was far too busy. But during the afternoons, when the lessons are finished and lunches eaten, my quiet time can be a mixed blessing, so thank God for the novel. What greater pleasure can there be than getting stuck into a novel like Buddenbrooks, spending hour upon hour in 19th century Lübeck?

Blogging also used to be cathartic, but without the stimulus of work and travel, I've been rather short of material. I haven't wanted to share my recent experiences because I didn't think it wouldn't be terribly entertaining, but I'm not quite ready to join the increasing number of people who have given up blogging.

I will try to ensure that my next post is more amusing.
Posted by Steerforth at 3:26 pm 19 comments