An Odd Day Out 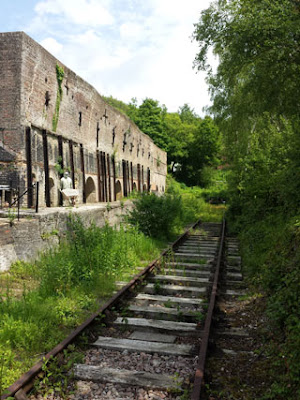 There is a splendid museum in a place called Amberley that contains an eclectic collection centred around Britain's industrial and rural heritage. If you're interested in Edwardian light bulbs, brick making or 1930s fire engines, I can thoroughly recommend it.

I'm not, but I still loved it.

On busy days, dozens of odd-looking families visit the museum, all armed with tupperware packed lunches and SLR cameras. Sometimes I hear snatches of conversations, usually conducted in a slightly nasal accent: "Of course these were the last D759s to be manufactured in Northampton, but the D80 was basically the same engine..."

Many of the exhibits are really quite boring, but in a sense that is part of their appeal.

The machines that operated the hidden infrastructure of daily life - telephone exchanges and power station control panels - have an unexpected beauty about them and it's hard not to feel impressed by their complexity and elegance.

Artists have paid homage to the machine age, but in the end it is the machines themselves that have ended up becoming works of art in their own right.

I may be a philistine, but I would rather look at a display of antique telephones than a gallery of Greco-Roman sculptures, with their uniform blank expressions and unfeasibly small genitalia.

However, I'm not just there for the knobs and dials. On quieter days, the place becomes more like a post-apocalyptic theme park, almost completely deserted, full of rusting, abandoned machines and makeshift settlements: 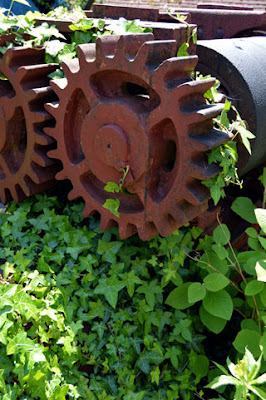 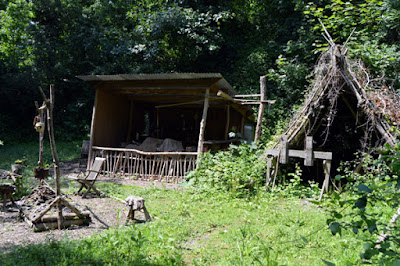 This is a camp for itenerant bodgers, making chair parts from unseasoned wood, usually for a pittance. The last bodger bodged over 50 years ago, but the craft is being revived by a small group of devotees.

The shelter looks as if it could belong to the future as much as the past. 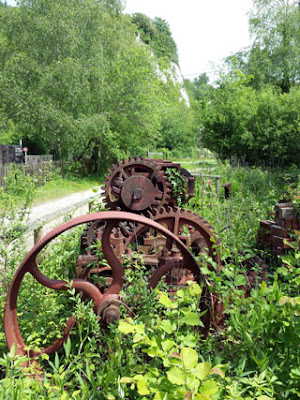 With a little tweaking, the whole place could be relaunched as a Walking Dead-related theme park. It would be more exciting than the current exhibition devoted to electricity substations (although I suspect that the school visits would dry up). 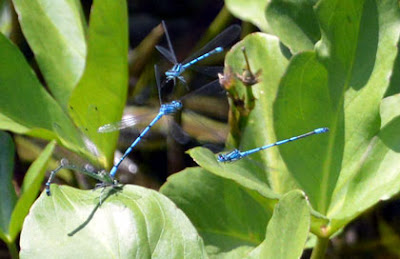 I was rather taken with the makeshift camps and imagined making a rabbit stew on a chilly autumn day, listening out for the ominous crack of a twig, but my post-apocalyptic fantasies were bought to an abrupt end by the appearance of some beautiful damsel flies.

I think some of them may have been mating. It's hard to tell. 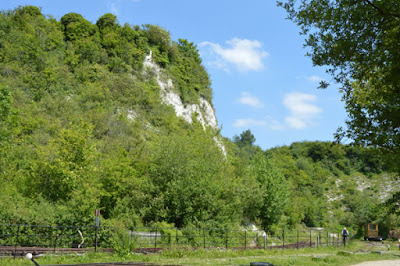 Amberley Museum is set in some beautiful surroundings, but the idyllic setting belies the fact that the place once looked like a poor man's Mordor, with smoke bellowing out of the local lime kilns. Limestone was quarried from these cliffs and burned with coal to make lime, which was then used to make the acidic soil of other counties more fertile. 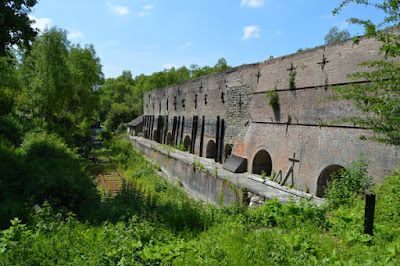 The traces of a railway line next to the kilns can still be seen, compounding the sense of dereliction.

However, I'd be doing Amberley Museum a disservice if I over-egged the post-apocalyptic pudding.

The museum should appeal to anyone who is even vaguely interested in social history and although some of its galleries are a bit on the 'specialist' side, there are others that are remarkably evocative.

I loved this reconstruction of an early 20th century office, where nobody would have been required to be a "team player" or feel "enthusiastic" (whatever happened to diligence, honesty and punctuality?). 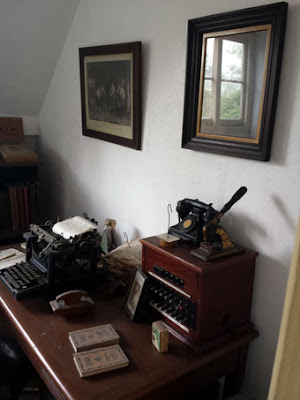 I also enjoyed being alone in this Southdown Buses booking office, below, trying to picture myself in the 1930s. If I'd been 10 years old, I would have had no problem losing myself in a fantasy about being a gentleman detective, but sadly I've lost the imagination I once took for granted. 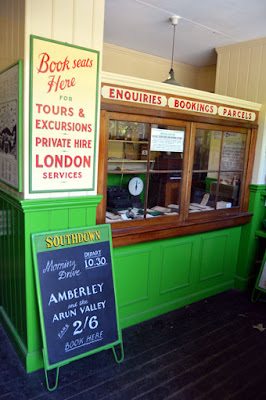 Amberley Museum has a particularly good Science Museum-esque electricity gallery, with hands-on displays to entertain younger visitors and a collection of household appliances to jog the memories of older ones: 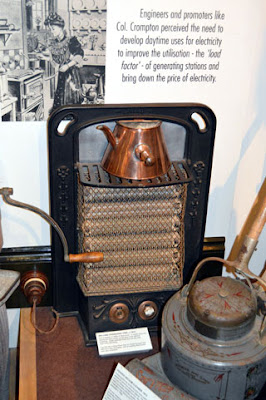 This prewar electric bar fire is remarkably versatile. Not only can you use it to make toast, but it also heats up a copper kettle for a nice cup of tea. It never caught on. I suppose some health and safety killjoy pointed out that electricity and water weren't a good combination. Either that, or someone came a cropper as they were preparing their afternoon tea.

I recognised several things from my past: a spin dryer, a television with three channel buttons, an old radio with evocative names like Athlone, Moscow and Paris on the dial and, more suprisingly, a late 90s Nokia mobile phone. Each one transported me back to a particular time and place.

One day, 18 years ago, I left work and got in my car, placing a carrier bag in the passenger seat. After a minute of seraching for the right tape to listen to on the journey home, I became aware of a tiny voice emanating from the carrier bag. It was saying "Hello? Hello?"

I tried to reconcile the reality of the voice with the impossibility of anyone or anything being inside the bag. Was I going mad? I didn't feel mad, but I suppose the truly insane rarely do. The voice continued: "Can you hear me?"

It was my wife's voice. Somehow, she had been shrunk down to the size of a toy soldier. There was no other explanation.

At no point did I ever consider that I might have accidentally phoned my wife on my new Nokia phone. I'd never owned a mobile phone before and was unaware that it could do this. I felt very silly afterwards and forgot all about it until I saw the phone again. It looked so big.

To return to the point, Amberley is a gem of a museum, thoroughly eccentric and quite unlike anywhere else I have been, with the added bonus of being set in beautiful surroundings. Even the dullest displays had their own strange appeal and I enjoyed the feeling of being immersed in a quieter, bygone world.

In an age when so many places have been fully 'monetized', with overpriced chi chi cafes and movie franchise-related displays, it's a pleasant surprise to find somewhere that isn't afraid to be boring. Long may it remain that way.
Posted by Steerforth at 10:52 pm 21 comments

Heaven in a Wild Flower

I seem to be exiled in Sussex at the moment, but I can think of worse places to be. Like the main character in the Stanley Middleton novel I've just read, I'm finding pleasure in small things: a hedgerow in blossom, a hatched bird's egg, a flint wall covered in lichen, a Victorian letter box, a fish-shaped weather vane...

I hadn't read Stanley Middleton before. I first knew him as the author whose name I didn't recognise on a list of Booker Prize winners (he shared the prize with Nadine Gordimer in 1973). His novels were usually conspicuous by their absence from bookshop shelves.

Middleton's 'Necessary Ends' is a novel about an old man by an old man and deals with death, regret and loneliness in a way that is never mawkish or sentimental, eschewing melodrama in favour of an almost forensic realism.

A hostile critic might complain that the end result of this realism is a novel in which nothing happens. That would be unfair. In one scene a pub lunch is arranged, in another chocolate biscuits are served on a small plate. There is even an episode that involves the misuse of a front lawn.

But I'm being flippant about what is actually an exquisite, beautifully observed novel, written with great warmth and humanity. And once you realise that the author isn't going to resort to any of the predictable plot devices for a novel about an octogenarian - the heart attack, the violent burglary, the estranged child - you're left with a story in which even the most trivial events are loaded with significance.

In its quiet, understated way, 'Necessary Ends' has the same dramatic and redemptive qualities as any novel I could mention, but they are more subtle and nebulous. A pub lunch that might seem mundane to most of us becomes a transfigurative event and is quietly uplifting, suggesting that we can be surprised by joy at any age.

Which brings me back to the theme of finding pleasure in the familiar, or as Blake put it, heaven in a wild flower. Here are a few photos from the last week: 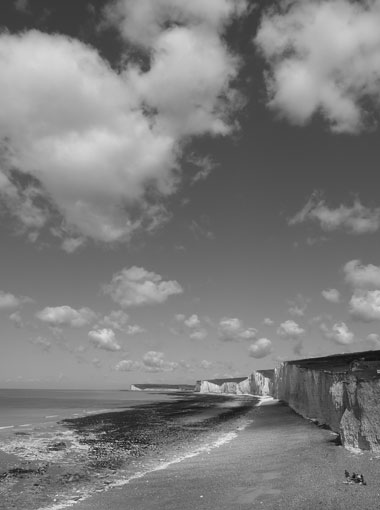 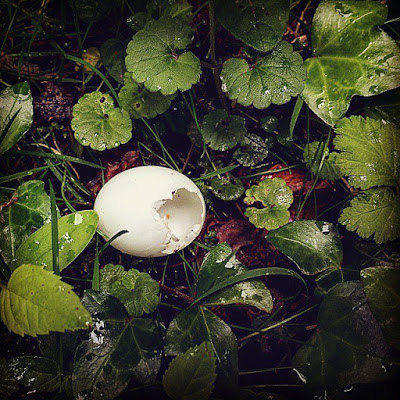 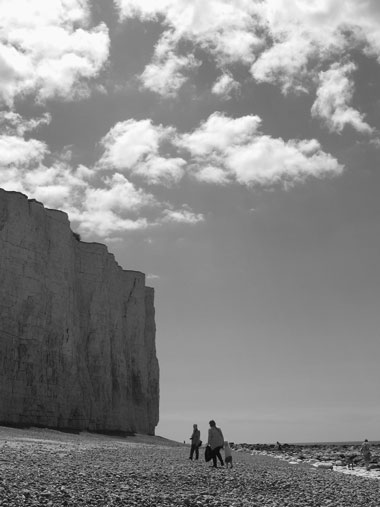 But for me, the best picture is the one below: my older son, running along the local beach for the first time in two years, laughing and playing with his brother. Thanks to a number of people, things are at last changing for the better. 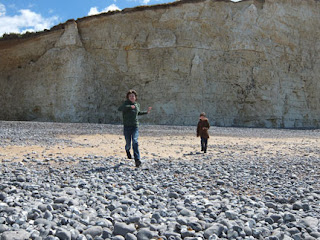