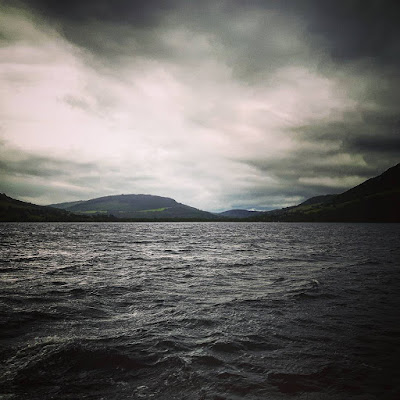 By modern day standards I'm not particularly well travelled, but I have seen a little of the world and visited some unusual places. However, I've been pretty useless at exploring my own country. I wasn't fully aware of this until a couple of months ago, when I worked out that I had spent less than two weeks of my adult life on the northern side of the Watford Gap.

It came as a shock to realise that I'd spent more time in Chile, Spain or France than the upper two thirds of Great Britain, so I resolved to do something about it.

I'd wanted to explore the north for quite a few years, but my older son couldn't cope with any car journey over three hours and after a disastrous trip to Spain, we decided to give up on family holidays.

However, my son has made so much progress during the last year, we felt that it was worth trying again, so I got out a map and worked out how far we could travel over ten days.

I checked distances on Google Maps and came up with the following intinerary: Lewes-Knaresborough-Whitby-Alnwick-Lindisfarne-Edinburgh-Inverness-Fort William-Glasgow-Lake Windemere-Yorkshire Dales-Haworth-Lewes. It would be a whistlestop tour of northern England and Scotland.

After confirming that our trip would include visits to Scottish relatives and a detour to the Lake District, my wife gave her royal ascent and I booked family rooms in a succession of hotels and b&bs. Then, two weeks ago, we got in the car and looked for a road sign that pointed to 'The North'.

For many years, I assumed that the North began somewhere slightly beyond Northampton, where people began to rhyme 'luck' with 'push' and many placenames ended in 'by' or 'thwaite'. There would be drystone walls instead of hedgerows and wild, windswept moorlands. But I was wrong. Before the North there is a place called the Midlands and everything looks quite similar for a long time.

I also noticed that even when I reached Yorkshire, it didn't look particularly northern until I'd driven right up to the edge of the North Yorkshire Moors, at which point the landscape dramtically changed and became more interesting.

But rather than bore you with a blow by blow account, here is a brief summary of the highs and lows of the trip:

HIGHS
LOWS
Here are some photos: Knaresborough was beautiful and civilised. I would like to go back for longer and also explore nearby Harrowgate. 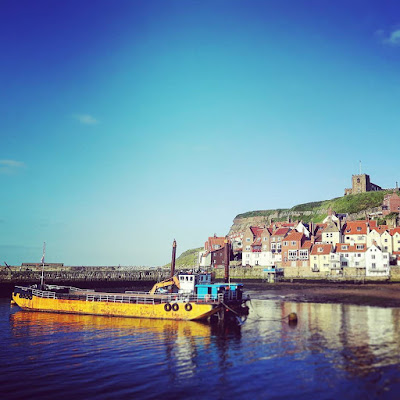 I was also a big fan of Whitby, which is a very picturesque fishing port, but also a traditional working class holiday resort, which saves it from being too twee. I particularly liked the famed Yorkshire 'plain speaking' as displayed by a rather taciturn waiter who simply looked at our plates and said "All done?"

My wife took a while to adjust: "They don't seem to have a wine list. Is that a northern thing?"

I'd wanted to visited Whitby ever since I'd watched a BBC Play for Today called The Fishing Party. 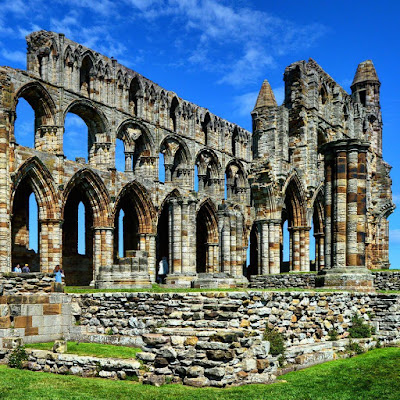 The ruined Whitby Abbey is the town's main attraction and the connection with Dracula draws many people with dyed black hair and unfortunate tattoos. I also noticed a lot of older men with shaved heads and large, slightly menacing dogs.

I don't normally long for bad weather, but I felt that the Abbey had lost some of its mystery in the bright sunshine, so in the evening I climbed the famous 199 steps and took some more atmopsheric shots, like this one: 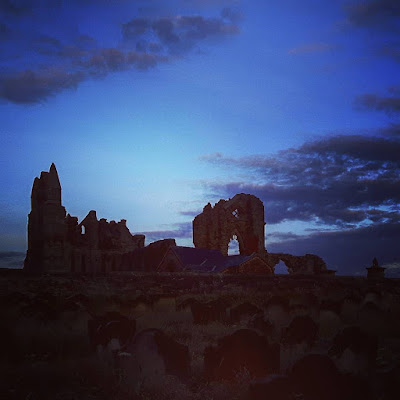 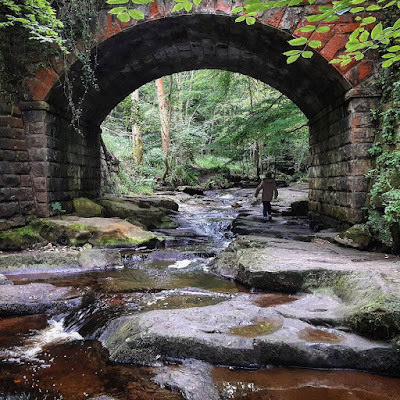 This is the Falling Foss - one of the many beautiful rivers and falls in North Yorkshire. My sons loved clambering over the rocks. 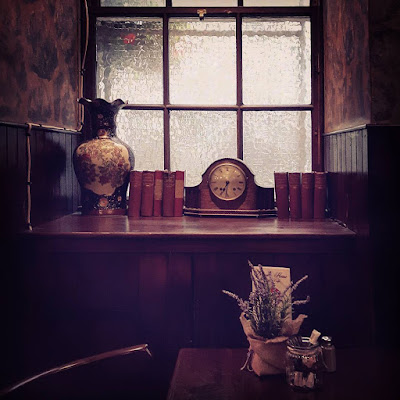 Edinburgh was a big hit with everyone. We booked an apartment just off the Royal Mile, which I can warmly recommend if you like non-stop bagpipe playing. Sometimes two pipers were playing different pieces at the same time, like a Charles Ives composition.

An octogenrian relative offered to drive us around the city and out of politeness we assented, but it turned out to be one of the most terrifying experiences I've ever had, like a very slow but deadly James Bond car chase.

This photo above is of a very attractive Edinburgh cafe that serves haggis sausages. 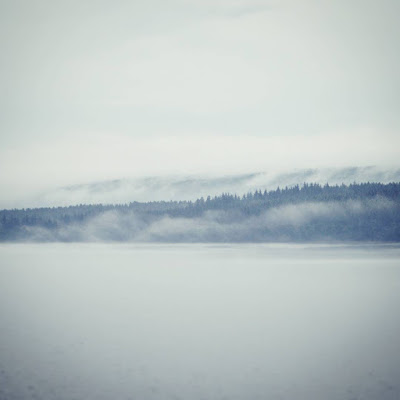 What better way to start a visit to the Highlands than a cruise on Loch Ness? Sadly, we were acommpanied by several dozen Chinese tourists, all armed with selfie sticks, who seemed rather over-excited and kept shouting over the commentary on the boat. At first I thought it was a one-off, but we witnessed the same behaviour on several occasions and our b&b owner confirmed that this was a common phenomenon.

I remember a time when, along with the Japanese and the Scandinavians, the Chinese were the most well-behaved and self-effacing of travellers. What has happened? 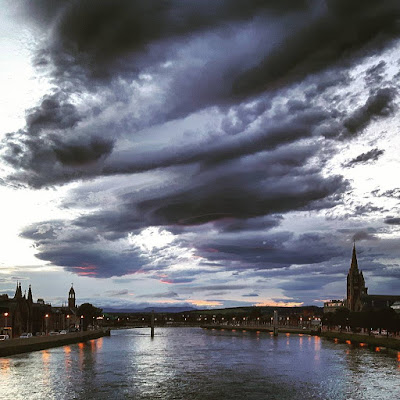 I'd always assumed that Inverness was a small, charming Highland town and part of it still is, but it is also now one of Europe's fastest-growing cities, with Sim City-like industrial zones and suburbs. It also has a very large secondhand bookshop called Leakey's, which is well worth a visit. 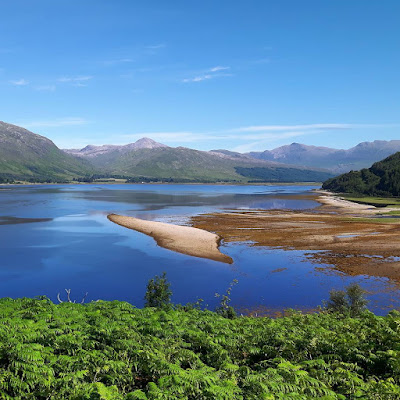 After what my wife's great-uncle described as a 'dreich' day, we were rewarded with some glorious weather when we drove to the west coast. I noticed that nearly half of the cars on the road were from the Netherlands. I've no idea why, but perhaps they were seeking relief from the relentless flatness of their own country. 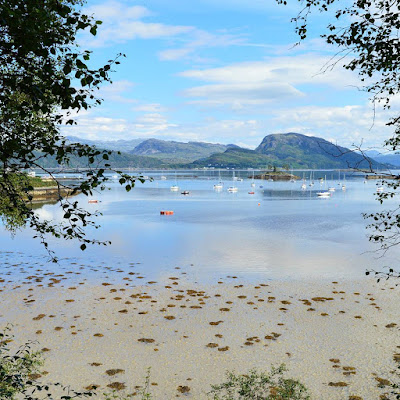 Plockton is one of the most beautiful places on the west coast - a small fishing village that, due to some geographical quirk, faces east. Its location in a protected bay and the Gulf Stream give it a surprisingly mild climate. Palm trees can be found by the harbour.

I had been to Plockton once before and met an interesting woman who was a very keen member of the SNP. She very kindly drove me around the Isle of Skye and gave me a map showing a route that took me on a path up into hills above Plockton. When I reached the top, the view was breathtaking. I vowed I would return as soon as I could. 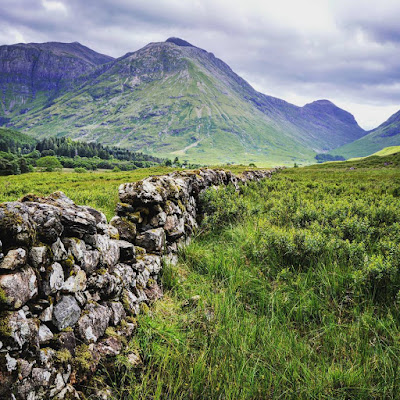 Glencoe - a stunning place with a tragic history. I intended to go for a long walk, but when my sons found a stream and started building a dam, I didn't have the heart to stop them: 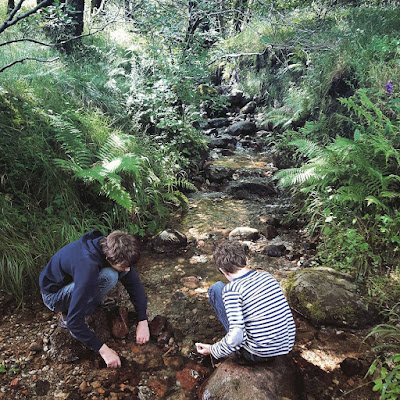 Parents can spend so much money on keeping their children entertained, but the greatest pleasures in life usually cost nothing (fuel, food and accommodation excepted). If we go back, I think I'll look for somewhere where my sons can just mess around in the water, preferably without drowning, 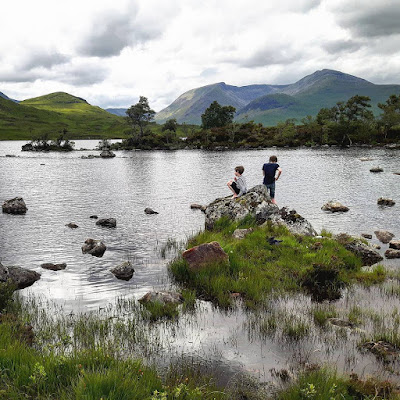 Later we stopped by a loch and my sons ruined two pairs of shoes, but had one of the happiest afternoons of their lives. 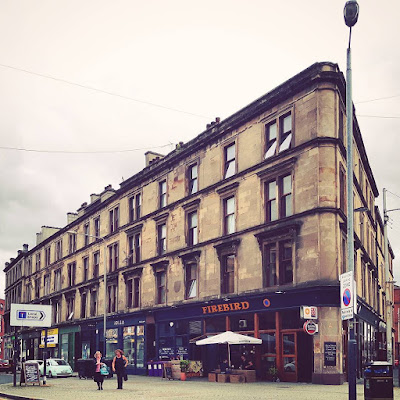 After the grandeur of the Scottish Highlands, Glasgow was an huge disappointment, as far as my sons were concerned. I thought it was it little like London - not beautiful, but full of interesting buildings and hidden gems, so I took a train to Partick and began exploring. I'd like to see more of Glasgow, but I suspect it will be a solo trip. 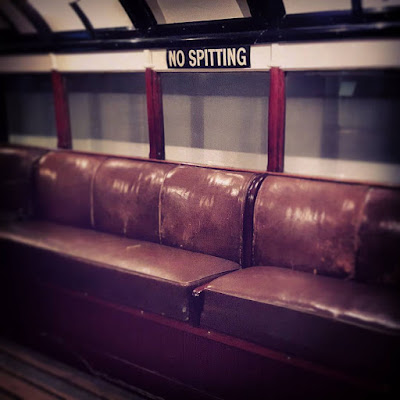 Glasgow's reputation as a tough city is neatly encapsulated in the 'No Spitting' signs in their old subway carriages, which can be seen in the excellent Riverside Museum. The sign wasn't simply an attempt to improve the manners of Glasgow's more uncouth inhabitants, but also a vital measure in the fight against TB, which claimed blighted the lives of many Glaswegians.

Although TB no longer ravages the tenements of Glasgow, the city still has many public health problems and I noticed many people who were not only morbidly obese, but also keen smokers. Glasgow is officially the sickest city in the United Kingdom and one in four men don't reach their 65th birthday.

After Glasgow, we drove down to the Lake District and hired a boat on Lake Windemere. Like Loch Ness, it was full of Chinese tourists with selfie sticks, but I managed to find a self-drive boat and we escaped from the madding crowd. Apart from a near collision with a paddle steamer, we had a very pleasant time. 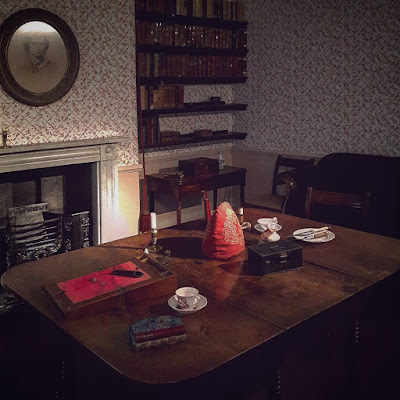 On the final day, we visited the Bronte Museum in Haworth, which was well worth the additional two hours journey time. On the dining table, where the sisters wrote their novels, there is a small E carved by Emily, who died on the couch in the background. The other rooms are full of interest, containing childhood ephemera, Bramwell's paintings and Charlotte's wedding dress.

I was particularly struck by a display of locks of hair - Emily was very blonde - and wondered if it would be possible to recreate the Bronte family using Jurassic Park-style technology.

I said I wouldn't bore you with a blow by blow account, but I seem to have done exactly that. To conclude, the holiday was a success and my older son, who once refused to leave the house, seems energised by the experience. Like so many children with his issues, he loved the most remote parts of the Highlands and hated anywhere that was full of tourists.

As for me, in the same way that some middle aged men realise that they're gay after years of denial, I have discovered that I am a closet Northerner. I suppose all the signs were there - a fondness for mushy peas, an aversion to direct sunlight and a preference for plain speaking.

Perhaps I've been living in the wrong part of England all this time.
Posted by Steerforth at 9:17 pm 27 comments