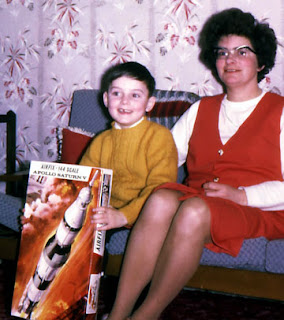 My mother will be joining us for Christmas Day, so I'm steeling myself for an afternoon of anecdotes about the illnesses of people I barely know:
If it's a good day, I'll be able to steer my mother away from her morbid preoccupation with illness and tell me about what life was like in the 1930s and 40s. They are far more entertaining than the latest progress report about Vera's leg.

I thought I'd heard all of my mother's anecdotes about the War, but the other day she told me a new one.

It was 1940 and my mother was reaching the end of a piano lesson. Her teacher had just rapped her on the knuckles for making a mistake when suddenly, an air raid siren sounded.

"You need to leave now. I have another girl waiting in the hall."

"But my mum says I have to stay where I am when a raid's on."

As the front door of the piano teacher's house slammed shut, the bombs started to fall and my mother ran through the streets, weeping. Behind her, a terraced house took a direct hit, creating a sudden gap in the neat, Victorian row. My mother ran on, wondering if she would ever reach home. She never had another piano lesson after that incident.

I often ask my mother to repeat the same stories about her childhood, so that I can remember them well enough to pass them on. They are nearly always interesting, even when the subject matter is mundane, simply because they are eye witness accounts of a period that is long gone. I also enjoy the obsolete slang and the way that most of my mother's sentences begin with "Any rate..."

One of the most magical things I saw recently was a clip posted by a Facebook friend, featuring two Devonshire women of my mother's age:

This generation, made up of people whose formative years were in a world without television, won't be around for much longer. Their memories of horse-drawn carts, Sunday best and mangles will disappear into the ether unless we talk to them now. Even if I am losing the will to live tomorrow, assailed by gloomy tales of gammy legs and failing pacemakers, I will remember to be grateful that my mother is still here. I'll miss her when she's gone.


P.S. - Christmas Day was a success. The issue of Vera's leg was never raised and the only revelation from my mother concerned the entertainer, Anita Harris (link provided for those who have never heard of her):

"My brother was obsessed with Anita Harris. If she ever appeared on the telly, he'd be in a bad mood for the rest of the day."
Posted by Steerforth at 8:04 pm 18 comments 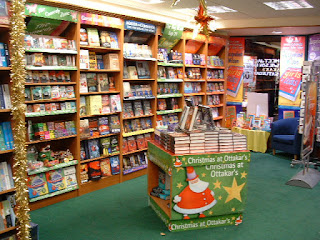 It's eight years since I worked in a bookshop at Christmas, but even now a split second of 'Let it Snow' makes me flinch like a dog that has been kicked too many times. It's too late to change. Nineteen Christmases in bookselling have reduced my festive spirit to a shrivelled husk. Why did I do it?

On reflection, my relationship with bookselling has mirrored Elizabeth Kübler-Ross's model for the five stages of grieving:

1. Denial: This is just a temporary expedient while I find something that is more suited to my talents.

2. Anger: It's been two years now. I'm skint and I still have no idea what to do with my life.

3. Bargaining: While I'm here, I may as well apply for that floor mananger job in Kingston.

4. Depression: I've just turned 30 and I'm still working in a bookshop. What a loser.

5. Acceptance: Actually, there are worse jobs than this. At least I'm a manager now. The pay is better, the work can be interesting and most of my colleagues are lovely people.

As time went on I began to appreciate my work far more, particularly when I worked for Ottakar's. How many other jobs would have given me the opportunity to discuss bedtime reading with Katie Price, or bemoan the state of the book trade with Jacqueline Wilson while sitting on a moving merry-go-round?

But the price for these precious moments was a heavy one: Christmas. I'm not just talking about the Phil Spector loop tapes, but also the sheer volume of books that had to be sold in November and December. It was exhausting.

Most branches of retail sensibly spread their sales across the year. However, in the book trade, 50% of the income is earned during the last ten weeks of the year and much of that money comes from a relatively small selection of bestsellers - usually hardbacks that consist of the following:

These books will be given as presents and very few people will actually ever read them, but they are the bread and butter of the publishing industry, making the difference between profit and loss.

As a manager, I knew that my head was on the block. If I ran out of any bestselling titles, it was a big black mark. However, if I ordered too much stock and was still stuck with it on December 27th, I would also be in trouble.

In addition to the bestellers, there were plenty of other things that could go wrong and at some point in the early hours of the morning, I would often wake up and go through tedious lists in my head:
What sort of person lies awake at night worrying about carrier bags? But like the nail that lost the kingdom in the famous nursery rhyme, their absence would spell disaster. And if we ran out of change, then harikiri was the only viable option.

The challenge of having to take five times as much money, unpack five times as many deliveries and have enough staff to cover these tasks (and the extended opening hours) was a daunting prospect, but I learned how to avoid the pitfalls and genuinely enjoyed the challenge and camaraderie. 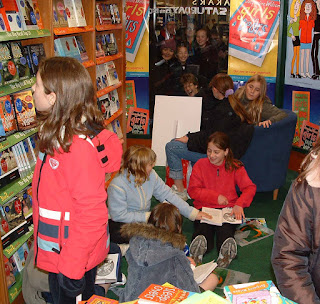 I miss that moment on Christmas Eve, after the doors have finally closed, when you know that the madness is over for another year and that in spite of sickness, missing deliveries and dreadful weather, you've pulled it off. After wishing the staff a Happy Christmas, you walk around the empty shop and take stock (not literally, I hasten to add), looking at the books that surprised everyone by becoming bestsellers and those that were supposed to, but didn't.

Your 16-year-old self would probably be rather disappointed that you've ended up running a shop, but there's not much call for third-rate composers these days and after all, this is a bookshop. So many people would think that having a whole bookshop to yourself is heaven and suddenly, you realise that they're right.
Posted by Steerforth at 2:56 pm 21 comments