At the time, this seemed the most stylish, zeitgeisty advert around. Could the 21st century be much better than this? With my usual visionary flare, I imagined that slightly smaller, dictaphone-style cassettes might be the norm by 2001. If we were very lucky.

For this band I'd buy the dodgiest tape I could find - probably something with a name like 'Supertronic' that could only be obtained at a local market stall - in the hope that the music would become inaudible within four plays.

Chrome cassettes were the aristocrats of the tape world, but there was a rumour that they were more abrasive and damaged the tape heads. This worried me greatly at the time.

The same rules applied to video recording too:

Thank God for digital. It's so nice to be free of chewed-up cassettes, tape hiss and the seemingly interminable wait for a C-120 to rewind back to the beginning. However, I miss that little wave of pleasure that came when I could afford a TDK AD90, rather than a mere D90.

Here are my favourite book covers from last week: 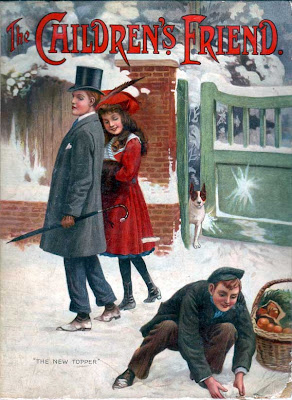 It could be a poster for the Big Society, with a young David and Samantha Cameron looking rather contemptuously at the boy from the local slums . Perhaps David is searching for a bobby: "Arrest that ruffian constable! He's stealing our snow." 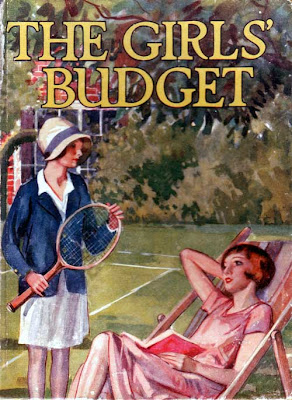 This rather downbeat illustration is for a collection of stories about jolly girls doing plucky things. I think that the girl in the deck chair is probably saying:

"The notion of ambiguity must not be confused with that of absurdity. To declare that existence is absurd is to deny that it can ever be given a meaning; to say that it is ambiguous is to assert that its meaning is never fixed, that it must be constantly won."
Or something like that. 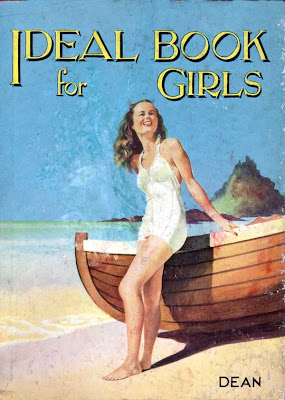 By contrast, this angst-free cover looks more like a 1950s glamour magazine than a children's annual. I think the artist was going beyond his remit.

Annuals may have changed over the years, but the one thing they had in common was that they were always complete crap. I remember the huge excitement on Christmas Day when I unwrapped a present containing an annual of my favourite tv programme, followed by the crushing disappointment when I realised that the contents were a selection of dull short stories and some poorly-executed drawings.

The next book is rather unusual: 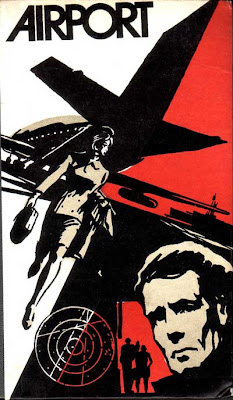 Airport was, of course, one of the most successful thrillers of the late 1960s and the film adaptation spawned a wave of disaster movies. Arthur Hailey's novel was a worldwide success, but I didn't realise that there was also an official Soviet version: 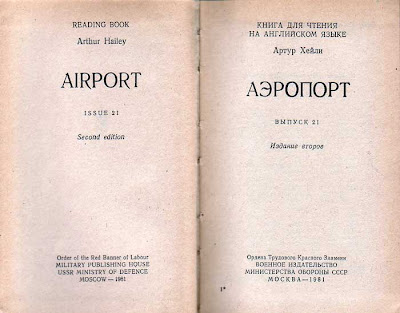 If I had to write a list of 20th century novels that might meet with the approval of the Soviet censor, Airport wouldn't be the first book that sprang to mind. But given Aeroflot's reputation in the 1980s, perhaps this was seen as a work of social realism.

This copy is in English, but every page has annotations at the bottom in Cyrillic. I expect they're ensuring that Mr Hailey's narrative is placed within a Marxist-Leninist context.

Finally, a very different novel from the late 1960s: 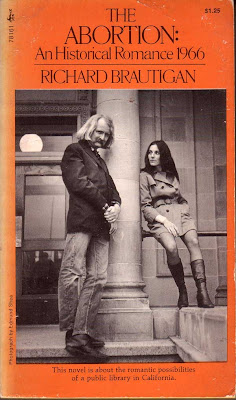 Apparently, quite a few of the women who appeared on the covers of Richard Brautigan's novels were also his lovers. It's comforting to see that a dodgy haircut and moustache is no obstacle to attracting a beautiful woman: 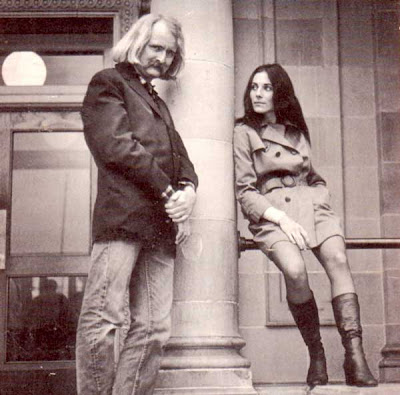 As writers' lives go, Brautigan's was one of the grimmest. Described by Thomas McGuane as "a gentle, troubled, deeply odd guy", Brautigan shot himself at the age of 49.

Perhaps he would have been happier if he'd met a crowd of nice young people: 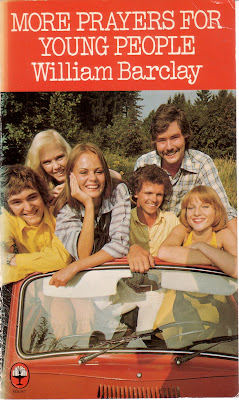 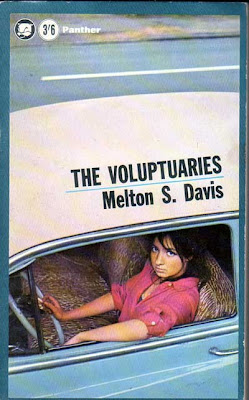 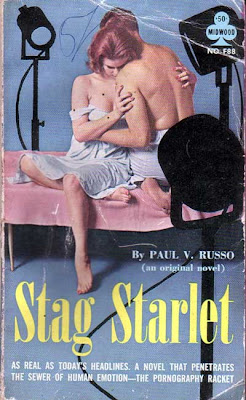 "As real as today's headlines. A novel that penetrates the sewer of human emotion..." 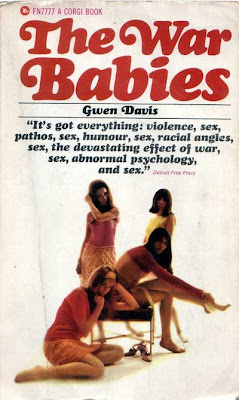 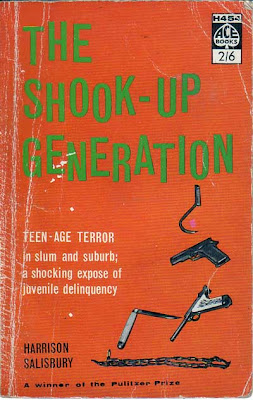 "Teen-age terror in slum and suburb..." 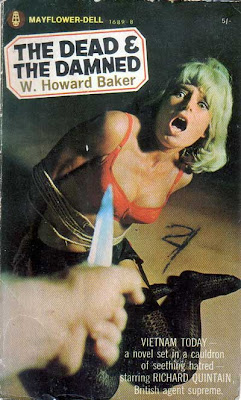 Paperbacks aren't this fun any more.
Posted by Steerforth at 11:39 am 16 comments

During a long, dull drive to Mortlake Crematorium yesterday, I listened to a podcast of Radio Four's excellent Start the Week, in which Andrew Marr and his guests discussed a quest to find 60 'New Elizabethans'.

"To mark the Diamond Jubilee, James Naughtie will be profiling the 60 public figures who have made the greatest impact in these islands during The Queen's reign - men and women who have defined the era and whose deeds will stand the test of time.

But who are the great achievers of the past six decades? Who will stamp their names in the history books just as Shakespeare, Drake and Raleigh did before them? Who will be remembered down the years for changing the way we live and think, for entertaining and amazing us?

We'd like your help to find The New Elizabethans. They can come from any walk of life. Their impact must have been on these islands between 1952 and the present day but that doesn't necessarily mean they have to be British.

You can suggest your New Elizabethans up to 5pm on March 9th 2012. All the names put forward will be passed to our panel of leading historians who will debate and decide on the final list of 60. Radio 4 will broadcast profiles of each of the chosen New Elizabethans during the summer this year."

I know that polls like these are a lot of nonsense, but I can't resist the allure of lists.

It's a relief to see that Radio Four aren't putting it to a popular vote (although I trust their listeners more than most people). Let's leave it to the experts. Democracy may work in the polling booth, but it's a lousy arbiter of quality.

However, the criteria are a little confusing.

The extract above includes anyone who has influenced British culture during the last 60 years, irrespective of nationality. But another Radio Four web page suggests that it should simply be a list of 'Great Britons'.

To confuse things further, what do we mean by 'Britons'? In 1953, citizens of Australia, New Zealand and Canada were widely regarded as de facto Britons, which is why Edmund Hillary's conquest of Everest was regarded as a British achievement. Where do we draw the line?

Driving home along the M25, I had a long time to think about this and started to come up with some names. I decided to limit my selection to individuals who were either born in Britain or have lived here for a number of years, as an international list would be far too difficult to narrow down to 60 people (mine would have to include figures as diverse as Elvis Presley, Bill Gates, Mikhail Gorbachev, the person who invented the Sony Walkman, Aaron Spelling, Milton Friedman and President Kennedy).

If I'd had more time, the list might have been very different. But for the moment these are the people who, for better or worse, seem to capture the spirit of the age:

There are quite a few names I'd like to remove - Rupert Murdoch, for example - but their influence is undeniable. Each person on this list has either changed or defined the time they lived in.

It's certainly not a 'greatest' list - that would look very different. On mine, writers, artists and poets are thin on the ground because in the age of mass media, I think they've become eclipsed by entertainers and celebrities. Perhaps I should have included figures from reality television too.

There are three weeks left until the poll is closed and the great and the good make their decision.

I wonder if it's too late for me to put in a bid for Sid James?
Posted by Steerforth at 6:25 pm 19 comments