The Wheel of Misfortune

In a recent post, I mentioned my horror of modern working practices like team building exercises and earnest discussions about brand identity. I also mentioned the term 'brand wheel'.

Until five years ago, I'd never heard of brand wheels. I'd chosen the relative penury of bookselling so that I would never have to sit in boardrooms, having serious conversations about things that didn't matter. It was an unspoken agreement.

Then HMV bought the company I worked for and suddenly books were called 'product', knowledge became 'learnings' and the staff were called 'resource' (always singular, I noticed). The agreement had been broken. It was a horrible time.

One day I was invited to a regional meeting and an ambitious young manager revealed a diagram of a thing called a 'brand wheel'. It consisted of various segments that represented different aspects of running a bookshop. Things so painfully obvious that it seemed unnecessary to write them down.

There were lots of words like knowledge (not 'learnings', on this occasion), authority, communication, enthusiasm and development. I suppose it was more positive than my approach, which was to simply Not Be Crap.

But there was a reductive quality about the brand wheel that smacked of totalitarianism (I'm sure that Stalin would have had one if he'd known about them): this is who we are, this is what we think and this is what we must do.

Here are some examples of brand wheels. Let's begin with a simple one: 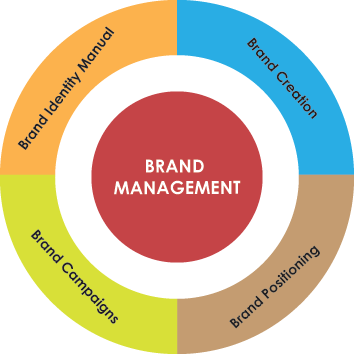 It looks nice doesn't it - I like the colours - and it's reassuringly simple: forming an idea, deciding who it should be aimed at, how to communicate it and how to avoid screwing up. That's the first slide in our Powerpoint presentation.

Now I'm going to turn up the wheel to Level 2: 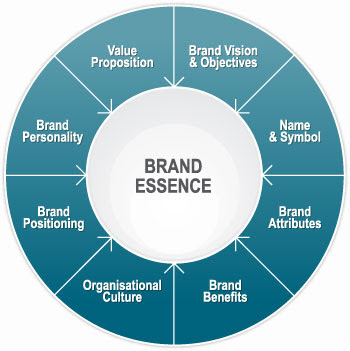 That's at least 15 minutes' worth of nonsense, assuming that the speaker limits themselves to around two minutes per segment. At this point in the presentation, I'm usually wondering if I can get away with taking the last Bourbon biscuit without looking desperate.

Then things start to get really nasty: 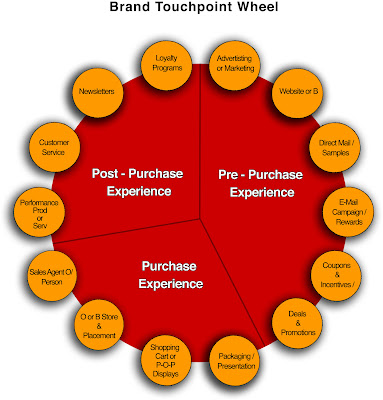 At this stage in the presentation, my benign contempt usually turns to rising anger. I feel like Peter Finch in Network. This is the end of civilisation as we know it. Once we talked with passion about justice, equality and fraternity. Now we're discussing the 'purchase experience'.

In the post-apocalyptic wasteland of the future, six-fingered historians will hold the charred remains of brand wheels and conclude that we deserved to die.

I am now going to turn the Brand Wheel up to 11: 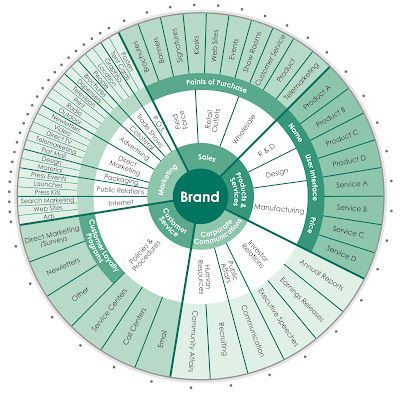 By now I feel like Charlton Heston at the end of 'Beneath the Planet of the Apes', grimly pressing the self-destruct button. I expect someone was very proud of themselves when they created this wheel.

Would you want to be friends with them?

If you work in an environment where people have serious conversations about 'brand positioning', then I recommend that you include the Level 11 Brand Wheel in your next Powerpoint presentation. It will baffle and impress in equal measure.

The only downside is that the people you really like will hate you.

But it isn't just dull corporations that have brand wheels: 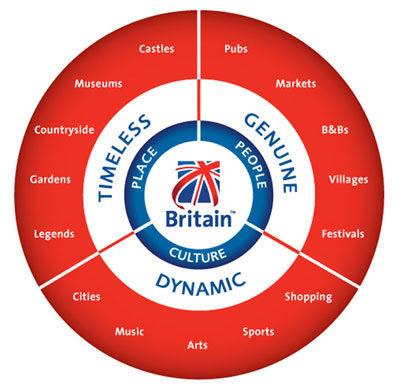 It looks like a rather dull daytime television quiz - "I'll have Cities, Jim" - where the answer could just as easily be Germany or Belgium. I wonder how much money was spent coming up with this fatuous representation of a complex nation.

Local authorities have also joined in:

Brand wheels contribute nothing to the good of mankind and they should be treated with the contempt they deserve. But as we enter recession, employees will probably feel less able to speak out against the rising tide of banal, business-speak in the workplace.

I only hope that as the recession deepens, paying people to develop brand wheels and hold team building exercises will be increasingly viewed as an unnecessary expense.

It reminds me, tangentially, of something similar I had to work with when I was designing wine labels for a winery to remain nameless. You'd spin this wheel thing to get an adjective (fruity, barnyardy, etc), then an inner wheel to get another (raspberries, peaches, etc) and then a third (strong mouthfeel, smooth aftertaste), and there was your pretentious wine label description sorted.

Horrible. I've heard of "Branding" as a business strategy, but libraries don't see themselves as competitors in a marketplace, so we've been spared this sort of thing.

Every few years the county labors mightily over a review of its "core values", which are so obvious that you wonder why anyone took the trouble.

You, sir, are Naomi Klein with a sense of humour.

This is wonderful bollocks which sadly undermines the worth of proper marketing. Marketing is pulling together the essence of entrepreneurship and it is this which companies like HMV so desperately need if they are to avoid going down the toilet and ditching thousands of good employees who don't deserve it.
Marketing is the way out of recession.

James - Yes, I remember the wine wheel. There was a Dorling Kindersley-style wine guide that had one. I remember playing frisby with it during a quiet evening at Waterstone's.

Brett - I don't mind local authorities emulating businesses when it comes to improved customer service and reducing waste. But why do they then blow it by hiring consultants to tell them the blindingly obvious?

Tim - I'm sure I heard Naomi Klein tell a joke (was it the one about the nuns in the bath? I can't remember).

Rog - Marketing is what Amazon are so good at. HMV's problem is that under Alan Giles and co, it developed a culture of stifling conformity that crushed the entrepreneurial spirit. 15 years ago, HMV had a strong brand and were in a perfect position to ride the wave of internet retail. Their abject failure to anticipate the changes in the 'entertainment' industry is why they're now going down the pan.

As you say, thousands of good employees are going to lose their jobs. All because of a few (mostly) men in suits who only thought in the short term.

This kind of nonsense is so counterproductive. The wasted hours at pointless presentations and the dreadful, ensuing inertia. Too many good people lost to the cruel seas of clap-trap.

To my shame, I actually enlarged the 11 wheel to appreciate its full horror. Absolutely ghastly. I used to sit in these meetings and doodle under the pretense of taking notes.

Martin - Yes, inertia is usually the end result. I wish we could quantify and measure what all of this nonsense brings to an organization.

Foxes - At least you do it for 'cheridee'. I can also see that in your previous job, reinforcing the brand was the only way you could prevent mentalist colleagues from pursuing their own agenda. Please don't tell me you ever had brand wheels (BTW - one word: Seville?).

Annabel - I used to try and behave, but always ended up losing it and would spend the rest of the session seeing how far I could push things. It was satisfying to see the pained expression on the trainer's face when you dared to ask "Sorry, perhaps I'm being slow, but what does that actually mean?" Forcing them to explain in clear, plain English usually revealed the poverty of their ideas.

I think this phenomenon can be summed up in two words “crap circles.”

Now let's move on to Project Development Lifecycle...or maybe Career Development... Vast amounts of gobbldygook do describe the blindingly obvious. People used to do work. Now they do this sort of thing...

What always gets me is how much the lovers of wheels and jargon delight in their inanity. I thought I was safe, as a teacher, from this kind of thing, but now even private schools are talking about "branding" and "stake-holders." (Recently, I was told to rename our "Course Description Catalogue" as a "Program Planning Guide.") Horrifying.

I would never have done well in marketing. I just can't stand bullshit.

The 'Brand Touchpoint Wheel' looks like one of those pizzas with the balls of garlicky cheesy dough attached (cheesy - there's a coincidence).
I recently overheard a gentleman on the bus telling an uninterested neighbour that it was his turn to do a 'trash walk' that evening at Mc Donalds. Litter picking has never sounded so exciting.
There are people who feel important talking crap, definitely.

erm... as Steerforth is aware ( but far too polite to mention ) - I work in brands, designing them, repositioning them, developing brand strategies and brand manuals etc.

We make this stuff up.

This was wonderful, a very funny post. Although I'm not sure the time and management wonks would think so!

Peter - That should have been the title of this post.

Séamas - I notice that your main blog's in Irish - presumably a brand wheel-free zone? I've noticed that when people talk about nonsense in other languages, they usually use English loan words: "Blah blah spin doctor, blah blah ball park figure etc. It must be nice to be bilingual and have a separate language for honest communication.

Chris - I think that's because we're no longer citizens, we're consumers - that's what it feels like - so an education is now increasingly perceived in terms of 'added value'. I'm not surprised that private schools are using the language of the market.

The idea of 'finding yourself' and studying what you love - common to people born between the mid 1940s and 70s - will, I suppose, seem laughable to the next generation. I wish I'd realised how lucky I was.

Sarah - I expect some people would rebrand bullshit if they had the chance.

Lucy - I've never been able to talk like that without laughing, which is why I live in a tiny house full of things that don't quite work.

Richard - I think your job sounds fascinating and I love reading about your dilemmas over minute alterations to fonts. I think that what you do is perfectly valid and if I had your talent I'd be very happy creating brand identities for clients. My objection centres around the Stalinist way some businesses confuse the brand with the actual organisation, compelling employees to become 'believers'.

Chickadee - I don't think this blog would be their natural port of call, but I'd welcome a heated debate!

At the not-so-small airline I work for there is an element to our leadership training titled 'stroking'. I kid you not. It's more creepy than I ever imagined.

These would be funny if they weren't actually being used!

Pirata Jenny said...
This comment has been removed by the author.
3:15 pm

You made me laugh (silently; I was in fact surrounded by brand wheels' developers). Yes, you're right, this is the end of civilization. Great post, mate.

Shelley - Yes, team building is still in vogue. Last year I was asked to go tenpin bowling with colleagues "as a team-building exercise". To me, team-building is the first step on a road that leads to totalitarianism.

I deal with this kind of corporate insanity all the time.*opens desk drawer, gropes about for pistol, shoots self*