I often find old colour photographs that are hand-tinted black and white shots, but the genuine article is a rarity. Today I found three early examples of a medium that, to my surprise has existed since the 1860s. The first one, from 1919, is particularly gorgeous: 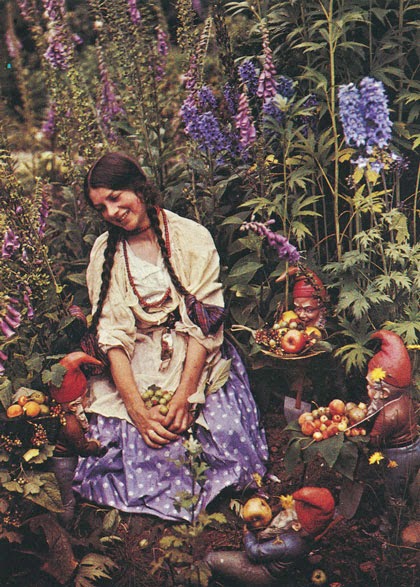 At first glance I wasn't sure where the picture was taken, but then I realised that it had to be British. What other country would have anything as daft as garden gnomes? The photograph was taken by an amateur - a Mrs A Barton - and is called 'Harvest Bounties'.

The next picture was taken by a Frenchman called Jean Tournassou in 1915: 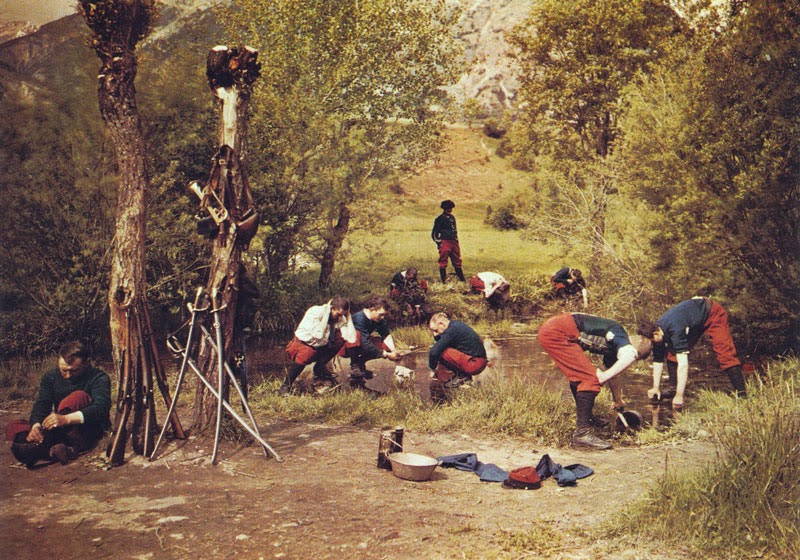 'Soldiers in the Field' is beautifully composed, but perhaps it also shows how the French army, with their colourful uniforms and ceremonial swords, were an anachronism in the machine age (he said, quickly checking Wikipedia to see if an off the cuff sweeping generalisation can be backed up). 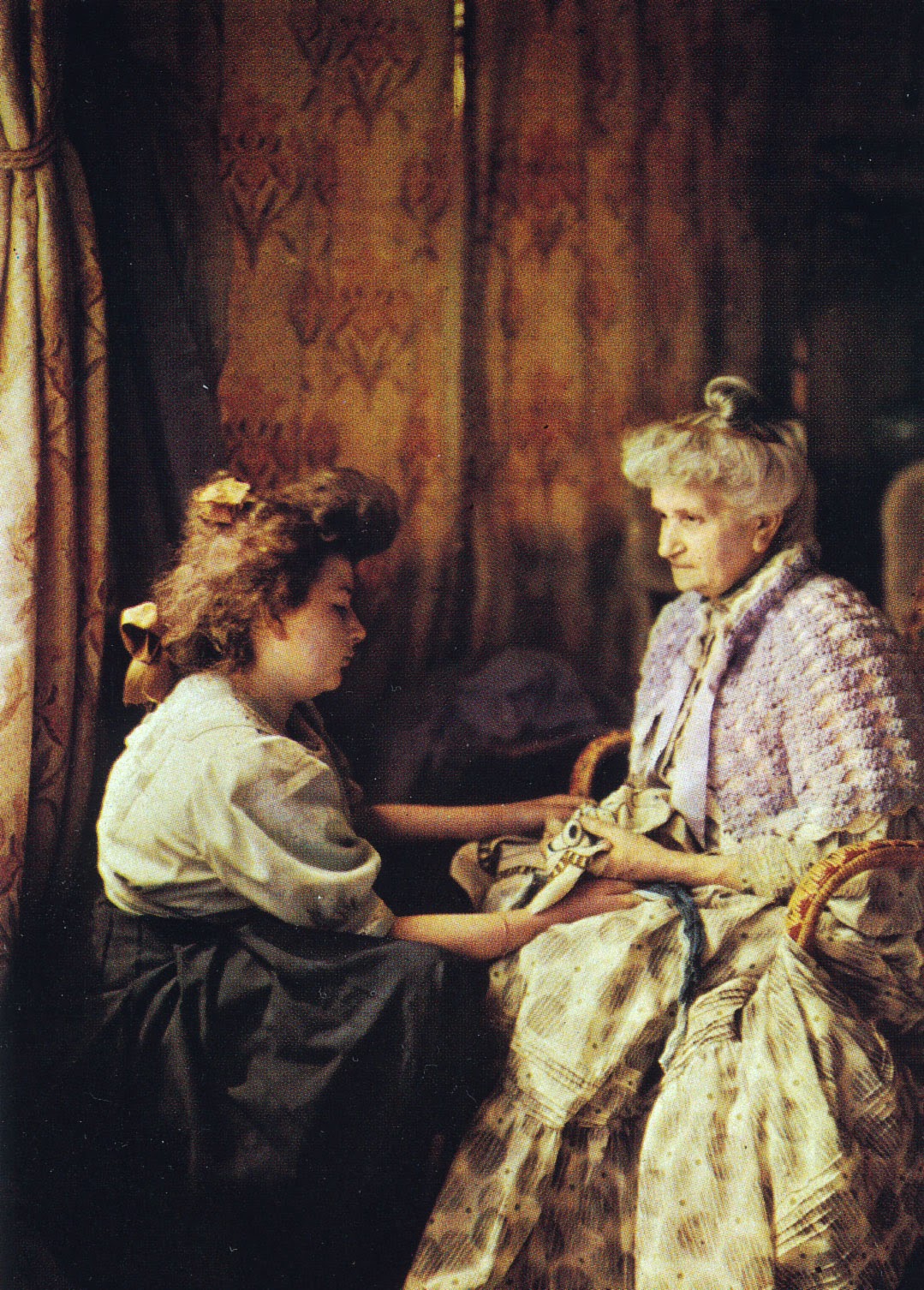 This picture was taken by Louis Lumiere of his mother and her granddaughter. It's hard to believe that this is actually a photograph, as the sepia hues and quality of light make this look like an oil painting. The granddaughter looks particularly Rubenesque.

Finally, two images that are a far cry from the age of Lumiere, but really exited me when I saw them yesterday: the surface of the planet Venus.

The only pictures I've seen up until now have always been distorted and of poor quality, but someone has taken the raw data sent back from the Soviet Venera probes and used it to reconstruct the actual view. As you can see, our "sister planet" looks even less inviting than Mars: 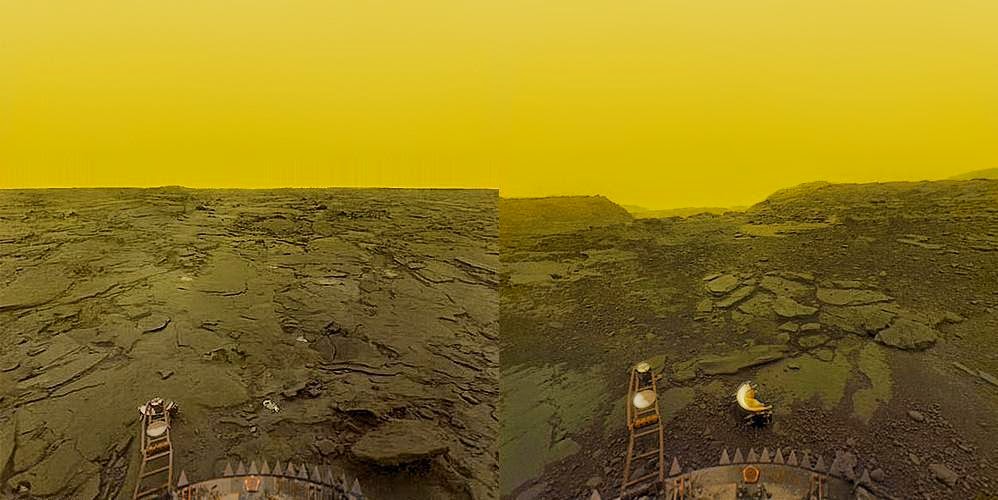 (On a nerdy, space probe note, I'm really looking forward to seeing the first close-up pictures of Pluto, when the NASA mission arrives there next July).
Posted by Steerforth at 4:23 pm 14 comments 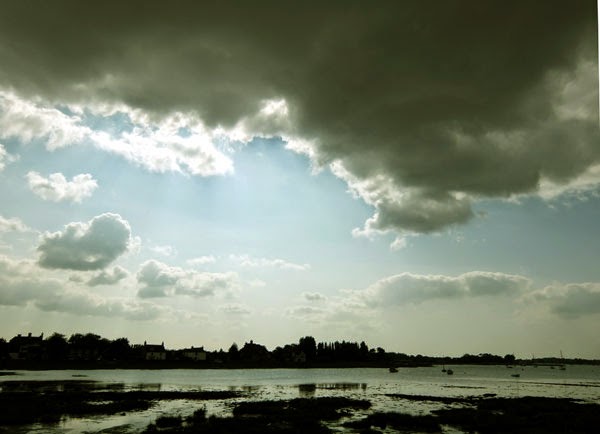 For the last two years, the radius of my world has been about 60 miles. It is a far cry from the days when I was able to visit Chile, but on the plus side my carbon footprint must be relatively low.

Today I drove west and visited Bosham (pronounced Bozzum, I am reliably informed) to do the usual thing of walking around aimlessly, making slightly appreciative noises, imagining living in one of the houses and looking in vain for somewhere to eat, before getting slightly bored and leaving. 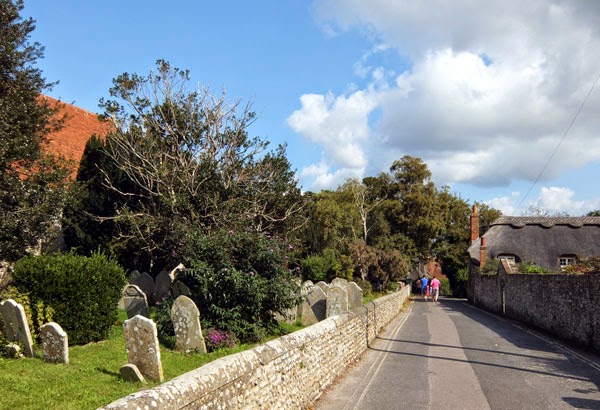 With mudflats and wading birds, Bosham was like a little piece of East Anglia in Sussex, although the locals seemed to be a little more prepared for the effects of global warming: 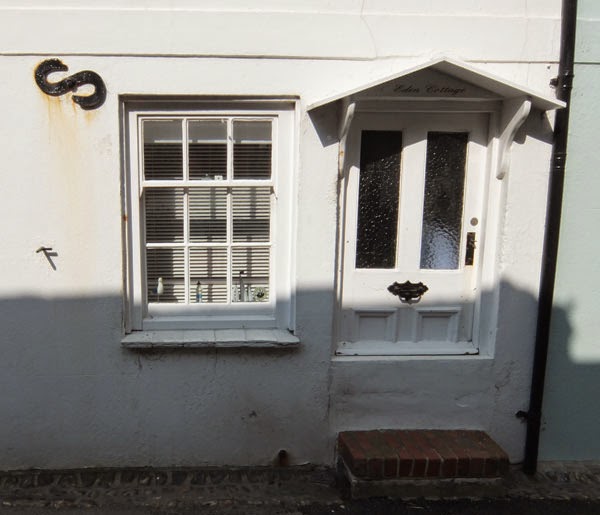 Down by the waterfront, Boden-wearing families hoisted the sails of their yachts, next to a sailing club building that read "MEMBERS ONLY" in block capitals. If you fancy joing the yachting set of Bosham, there is a three-bedroom house on sale, half a mile away, for 1.6 million.

(I've always liked the idea of sailing and once put out to sea in a dinghy that cost £17, from a beachside kiosk. It had two air pockets, which I later learned was a bad thing, but it got my girlfriend and I from Charmouth to Lyme Regis without incident.)

After a failed attempted to have lunch in Bosham, we drove towards Chichester and stopped at the first pub we saw. That was a mistake, but hunger makes madmen of us all.

I should have noticed that I was the only male who wasn't wearing a JD Sports football shirt, plus the ominous queue for the carvery - all you can eat for £6.95. We paid in advance and were handed a wooden spoon by a woman in leopardskin leggings: "You 'ave ta wai' 'til they call y'numbah."

I'm not a big fan of carveries. The emphasis seems to be on quantity rather than quality and there is something particularly unedifying about seeing people greedily filling their plates with twice as much as they need. A woman in front of me had two large portions of lukewarm meat, six roast potatoes, three Yorkshire puddings and enough cauliflower cheese to feed a family of four in World War Two.

I had half as much and still felt like an anaconda digesting a horse.

As an antidote to the carvery, we visited the excellent Pallant House Gallery in Chichester. Situated in a Georgian house and a modern annex, the gallery has an intelligently-curated mixture of 20th century British art and I would recommend it without reservation. 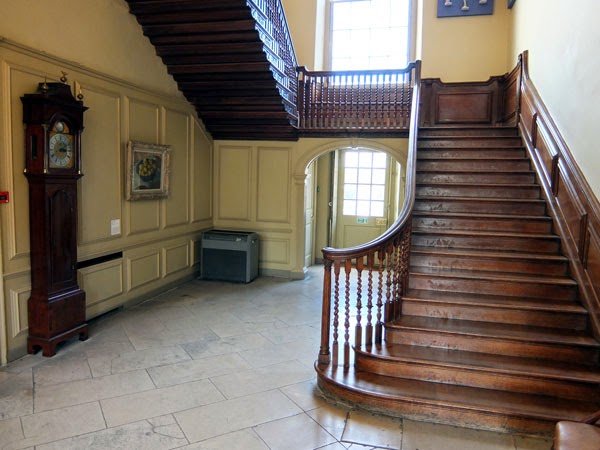 I particularly liked the way that the contemporary art was displayed in a traditional setting, for example this work by Andy Goldsworthy, which was put in a fireplace: 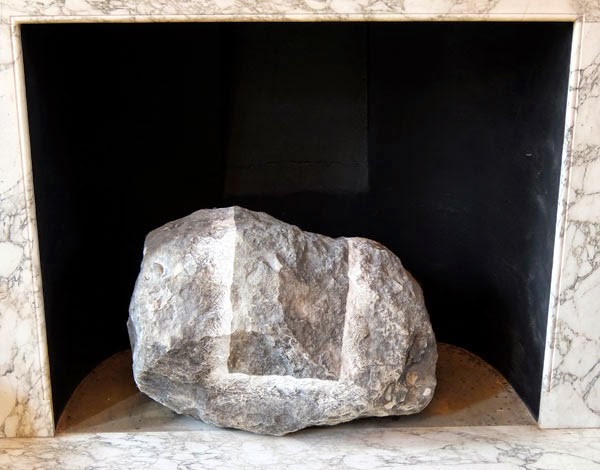 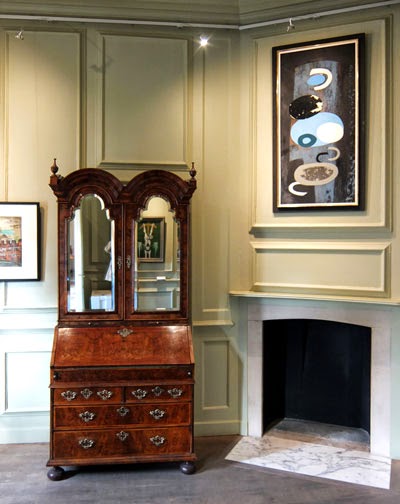 The work below is rather intriguing. At first glance, it doesn't make any sense. 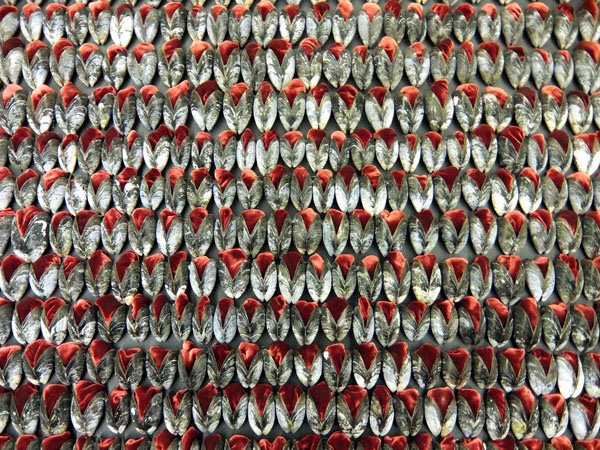 But a closer inspection reveals hundreds of mussels filled with velvet. It still doesn't make any sense though. 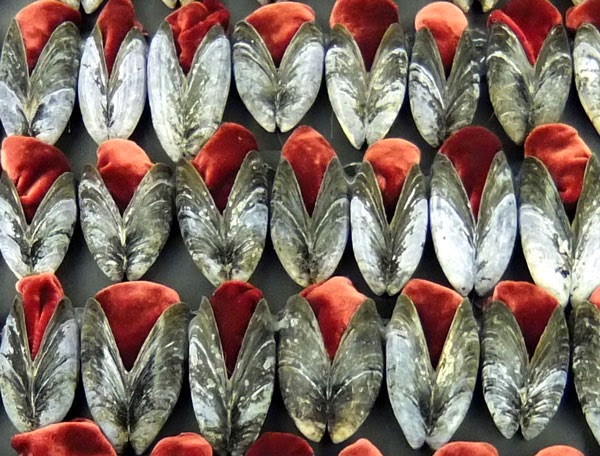 The next gallery is particularly marvellous. Can you guess what is so unusual about it? 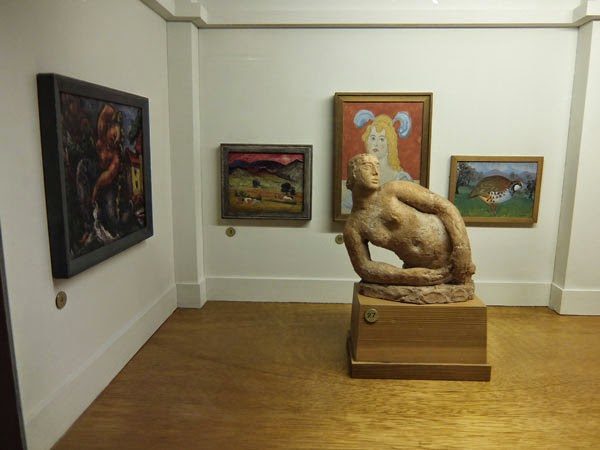 The answer is that the sculpture is only slightly larger than my thumb. This is a 1930s project which sought to recreate well-known works by contemporary artists, in miniature: 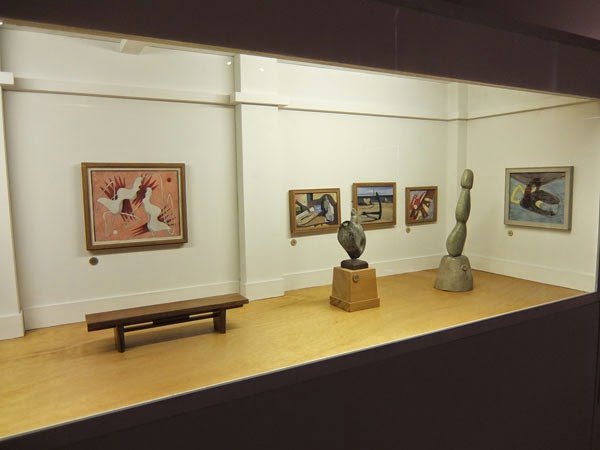 In contrast, the person below is life-size: 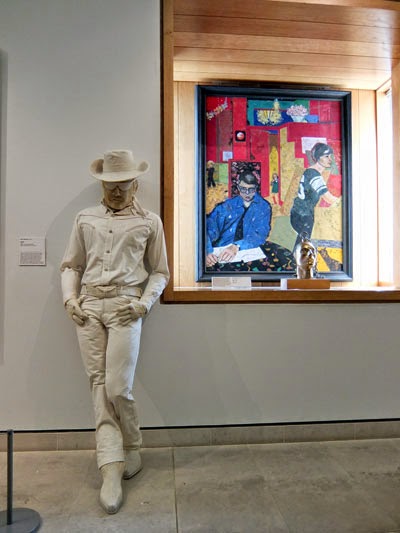 This extraodinary cloth doll was created by Jaan Howarth, the wife of Peter Blake (apparently she helped him design the cover for Sergeant Pepper). The figure is the same person as the man in Kitaj's painting, just behind.

A guide told us that a small boy started drawing the dummy on a school trip and came back in his own time to complete the sketch. He was horrified to find that the hands were in a slightly different position.

I appreciated the gallery's enlightened attitude towards taking photos. Obviously it's a pain when people use noisy, bleepy cameras and flash bulbs that recreate an atomic blast, but for those of us that use silent cameras on suppressed flash, it's good to be able to snap away without being made to feel like a naughty schoolchild. 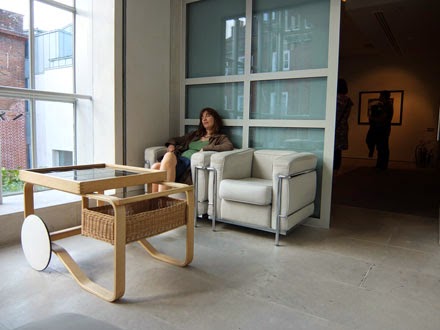 After an hour, my wife became galleried-out and was delighted to find a room with comfortable seats and a view of Chichester's attractive Georgian back streets. I found a community art project that consisted of square tiles, each of which was made by a different local person: 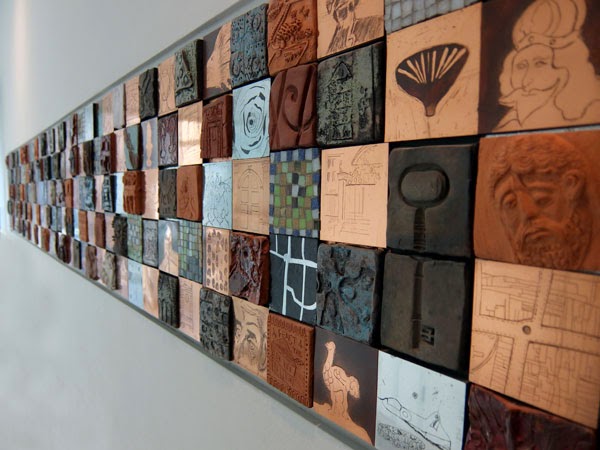 It was surprisingly good. I say surprisingly, because so many exhibitions of works by local artists are astoundingly awful. Chichester is clearly a hotbed of creative talent.

Even the street art in Chichester is a cut above the usual standard: 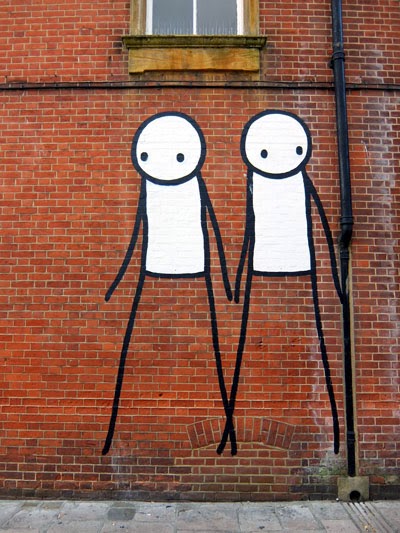 The one disappointment of the day was seeing that Marks and Spencers had got away with removing this traditional frontage, which I photographed four years ago. Another defeat in the battle against Clone Town Britain. 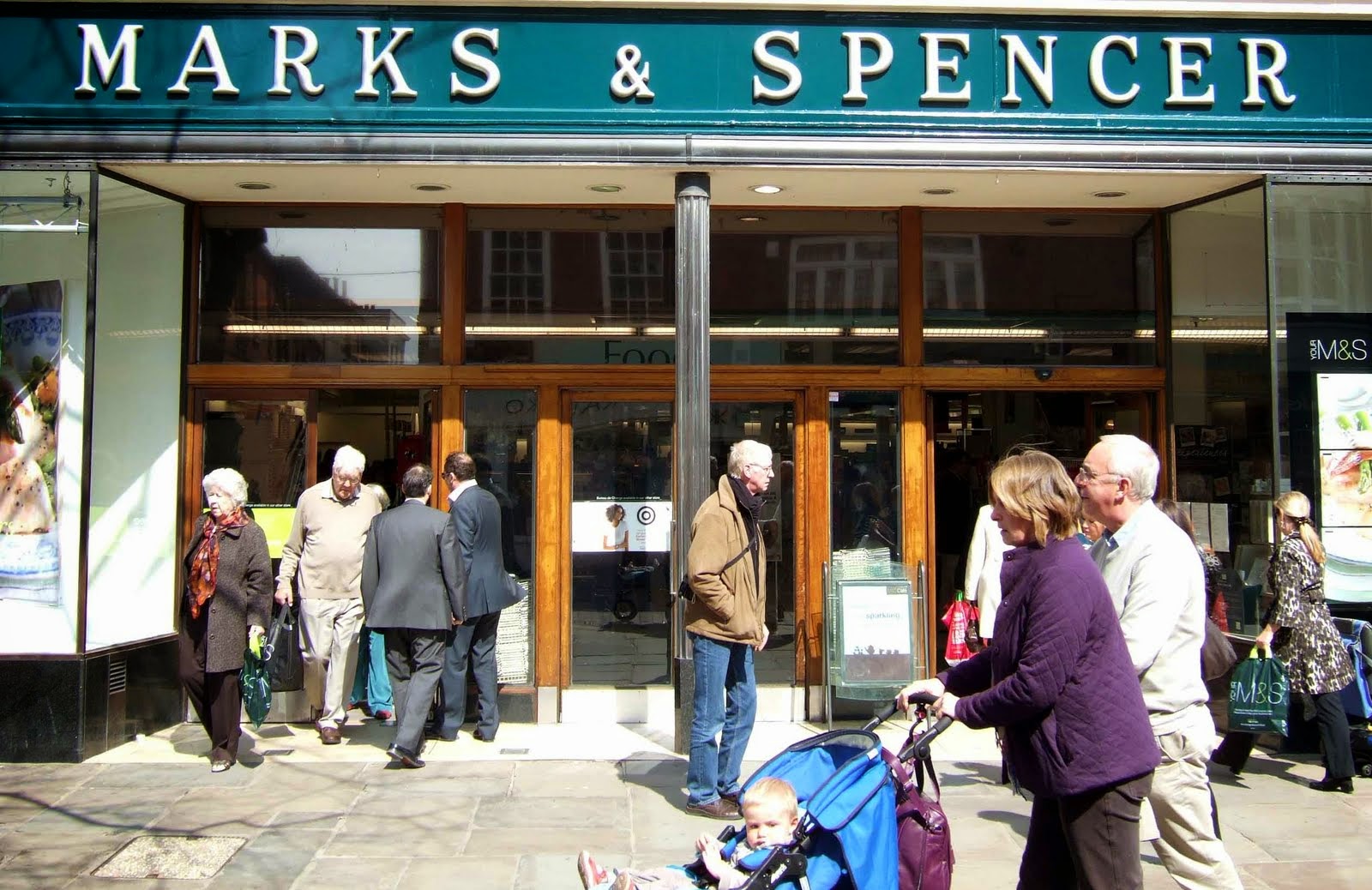 But with its quirky, Georgian streets and Roman heritage, Chichester is anything but a clone town. In the words of the Terminator, I'll be back.
Posted by Steerforth at 9:56 pm 17 comments

What is there to say about the Scottish referendum? I avoid writing about politics on this blog, partly because it's too divisive, but also because the people who do it for a living are so much better. This article, for example, gives a very good overview of what has happened during the last few weeks.

Instead, I shall post this enchanting 1941 documentary about the Western Isles of Scotland, photographed by Jack Cardiff. If you can't face watching the whole thing, skip to 8:45 for some lovely Gaelic singing.

Email ThisBlogThis!Share to TwitterShare to FacebookShare to Pinterest
Labels: western isles of scotland

On the Road Again

I have just found this fascinating discussion on hippies, from a 1968 television programme called Firing Line. It features a drunken Jack Kerouac.

Around this time, Kerouac decided to have another go at hitchhiking around America and walked to the nearest highway intersection to thumb a lift. Perhaps the sight of a raddled-looking man in his 40s was less appealing than the handsome young man who wrote On the Road, as nobody slowed down to pick him up.

After two hours, it started to rain and Kerouac walked back to his apartment, where I expect he had a drink.

A year later, Kerouac's liver finally gave up the ghost. 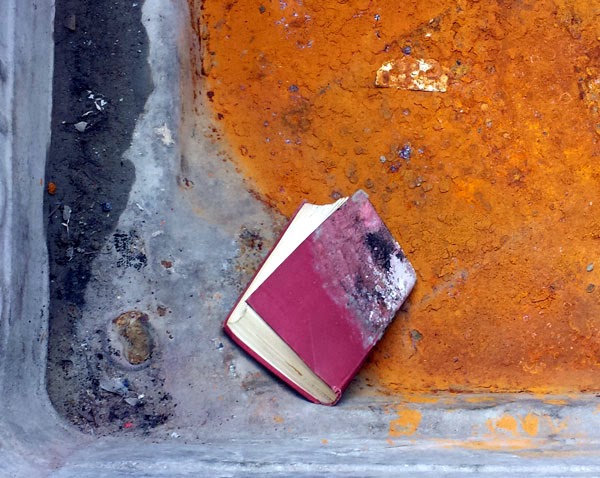 This time last week, I was congratulating myself on a month of healthy book sales. At last, it looked as if my business had recovered from the two months I'd lost to illness, earlier in the year. Little did I know that within days, it would all go horribly wrong.

I won't bore you with a lengthy account. The short answer is that my courier company decided to shut down my account, as a business that trades from the same farm as me owes them a lot of money. I have always paid my bills on time, but they wouldn't budge:

"Please be advised that as a business we are not totally convinced that there isn't a link between your company and ********."

I offered to provide evidence that I was a completely separate business, but their reply more or less said that they had neither the time nor the inclination to look into it.

I looked at the sackfuls of uncollected orders and wondered what I was going to do. An internet business can go down very quickly if its orders aren't fulfilled in time. Waiting until an account with a new courier was set up wasn't an option.

In the end, I took the only sensible option available: I bought an awful lot of stamps.

It has been a challenging few days, but I have taken my inspiration from a pot outside a neighbouring unit, where people throw their cigarette ends: 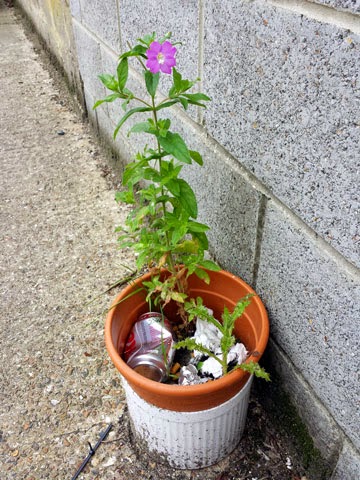 Like the weed, perhaps I will triumph over adversity. It would be good to find a courier that, like Steve Austin, is better, stronger and faster. One that doesn't routinely lose parcels and delivers promptly to the time-conscious Germans.

When things are difficult at work, I usually look forward to going home, but for the last few weeks our house has been taken over by two psychotic male kittens, pictured below:

(I should point out that the second kitten is not actually locked in the stove, but is merely reflected in the glass) 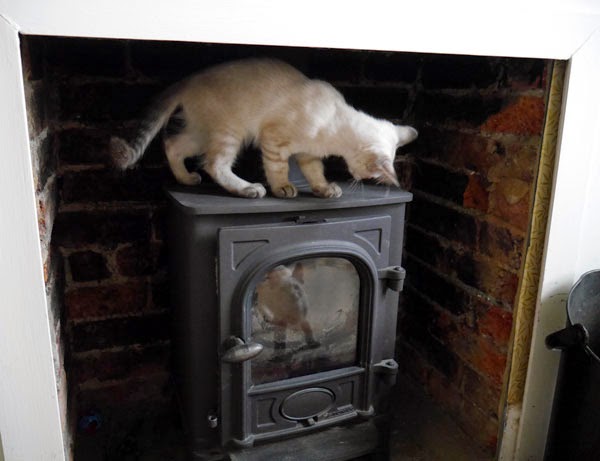 We have taken to hiding upstairs behind closed doors, while they demolish sofas, disconnect telephone cables and sit on our modem until it overheats. I'm not sure if getting two cats was a good idea.

On Saturday evening they became so manic, we ended up fleeing to the safety of Brighton beach, for a fish and chip supper. 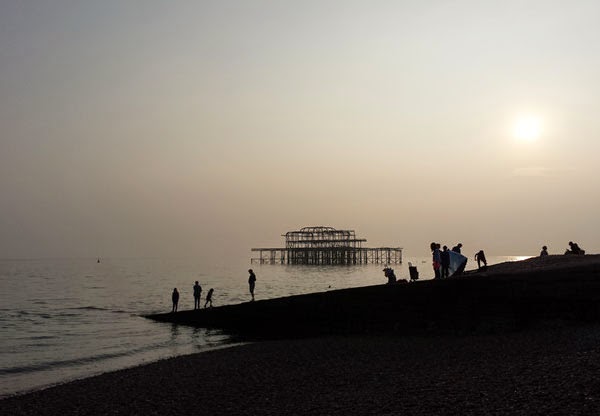 On the subject of Brighton, I saw these beautiful magic lantern slides in Hove Museum yesterday. I was trying to explain to my younger son how miraculous they must have been in a world without cinema or television. He seemed to enjoy them as much as I did. 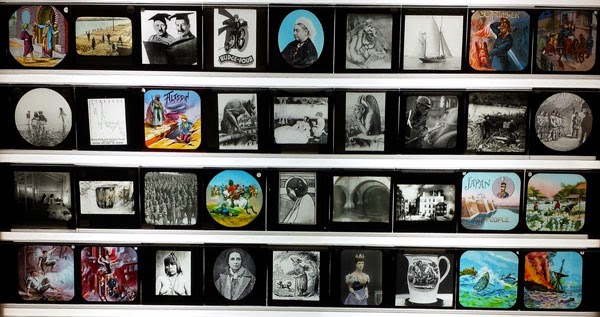 My older son remains in his room. He hasn't been out for nine months, apart from a few medical appointments and a trip to his grandmother's. My wife is very good and never loses hope, but I have felt mine slip away and feel desperately sad that he has lost a large part of his childhood.

Perhaps I need to distract myself with a hobby. I often find old guides to various pastimes, but this book, which I found last week, would probably only lead to more trouble: 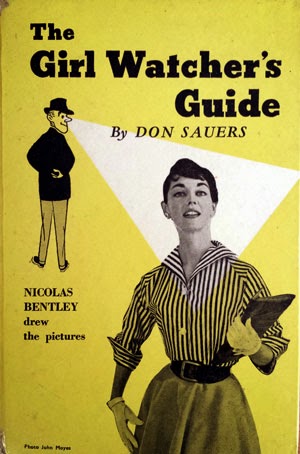 On the Subject of Bad Art...

While we're on the subject of bad art, many thanks to Andrea (who produces very good art) for providing a link to this wonderful 'tribute' to Thomas Kincaid: 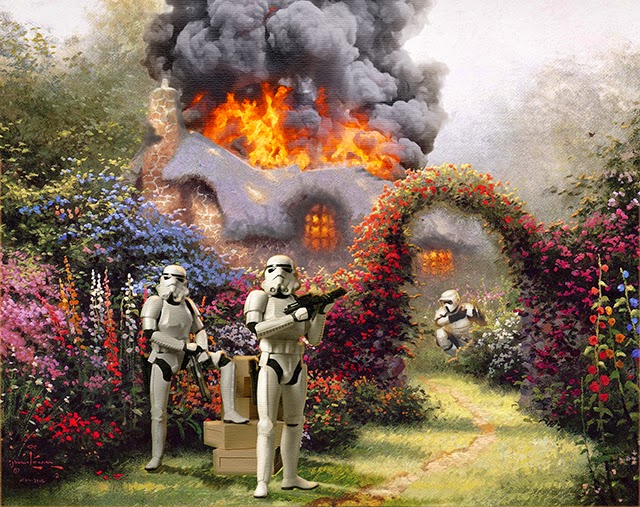 Here's a link to the rest of the series.
Posted by Steerforth at 7:54 am 6 comments