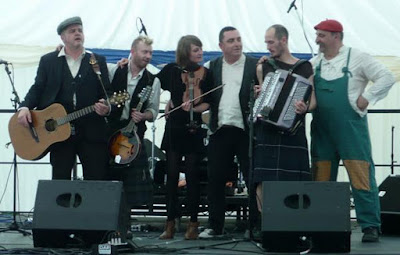 I've just returned from Rye, where I met an old friend for a drink.

Twelve years ago he was living around the corner from my flat in Twickenham, earning a fortune in business publishing, but hating every minute of his working day. Then one day he decided he'd had enough, sold his flat for £120,000 and bought another on the Kent coast for £60,000, using the balance to pay off his mortgage.

He's never had a 'proper' job since, and seems much happier for it.

Last year he was invited to audition for a French punk-folk band (he is a violinist) and phoned to book a seat as a foot passenger on a cross-channel ferry. "I'm sorry," he was told, "but we don't accept foot passengers any more, only people with vehicles. You'll have to pay the car rate, which is £60".

My friend slammed the phone down in disgust, lit a cigarette and fumed. Then he had an idea and redialled the number:

"You said I had to pay for a vehicle. If I came by bicycle, how much would that cost?"

Two weeks later, my friend was the sole cyclist in a slowly moving queue of cars and lorries at Dover's docks, congratulating himself for his moral victory over mindless bureaucracy. The band were apparently waiting for him in Calais, so he decided to spend the hour-long crossing relaxing in the bar.

With five minutes left until the ferry docked, my friend made his way down to the vehicle hold and unchained his bicycle. Soon, he could hear the sound of chains moving and ramps descending, followed by the hissing of hydraulic brakes as the lorries began to edge forward. He quickly phoned one of the band members to find out where he needed to go.

"'Allo Graham. You muss follow le traffique and take ze second exit on the left. Yes? We are 500 metres away".

Graham followed their directions faithfully, making sure that he took the correct exit and found himself cycling up a rather steep ramp, which left him feeling a little breathless. To his relief, the ramp became flatter and seemed to be joining a proper road, then suddenly: WOOSSSHHHHH!

A powerful gust of wind almost knocked him off his bike and to Graham's horror, he found himself on a motorway being buffeted by a succession of fast-moving lorries. There didn't seem any way to get off the motorway. Terrified, he stood on the edge of the slow lane, wondering what to do next.

Suddenly, Graham's phone rang: "'Allo Graham. Eet is me again. Do NOT take ze second exit! Comprenez-vous? It is the WRONG exit!"

After a farcical (and very dangerous) half hour spent trying to leave the motorway, Graham eventually found the band and began what turned out to be a very alcoholic weekend. He now plays gigs with them on both sides of the channel.

It's strange how people's lives can change so much, in ways that we could never predict.

In the late 1990s, Graham seemed to have it all. He was earning at least four times as much as me and always seemed to be getting promoted. Evenings were often spent in smart restaurants, dining with the leading lights of international banking, or at the Strangers' Bar at the House of Commons, getting gossip from drunken MPs.

Occasionally Graham would say how depressed he was by the ease of his ascent. He'd never been particularly interested in business publishing and couldn't understand why people at the highest levels accepted him as one of their own. Success bought financial rewards and status, but also increasing levels of stress, boredom and frustration.

I don't know what finally pushed Graham to suddenly hand his notice in and he'd never expressed any interest in visiting Kent, let alone living there, but within the space of a few months he completely transformed his life.

Today, Graham plays the fiddle at folk festivals and private functions, earning just enough to pay the bills and enjoy the occasional trip to India. He lives quite frugally but is completely debt-free and doesn't miss his old life at all.

I'm sure that Graham's example partly gave me the courage and inspiration to change my life. Unlike Graham, I've never had to face the same temptations (although I was made a very attractive offer earlier this year), but it was still hard to take a leap into the unknown.

After saying goodbye to Graham, I sat on the train and looked at BBC News. In a piece about people who died in 2011, I saw these particularly apposite quotes by Steve Jobs:

"Remembering that I'll be dead soon is the most important tool I've ever encountered to help me make the big choices in life. Because almost everything - all external expectations, all pride, all fear of embarrassment or failure - these things just fall away in the face of death, leaving only what is truly important.

Your time is limited, so don't waste it living someone else's life. Don't be trapped by dogma - which is living with the results of other people's thinking. Don't let the noise of others' opinions drown out your own inner voice."

I know it's easy to make statements like that when you're the billionaire CEO of a corporation (I'm not sure what the Chinese sweatshop workers who make many of Apple's products would say), but I agree with the sentiments.

I think that next year will be all about putting these ideas into practice.

The Age of Uncertainty

This evening, as we were driving home in the dark after returning a van to a slightly menacing industrial estate, my wife turned to me and said, 'You haven't done your blog for ages.'

This came as a shock. Obviously I knew that I hadn't written any posts for over a month - the longest gap in five years of blogging - but I had no idea that my wife was aware of this. She used to claim that she never read my blog, as she was far too busy being an übermother to fritter her time away on such trifles.

I hadn't intended to stop blogging, but it seemed a rather self-indulgent thing to do while I was trying to establish an internet business. Also, I couldn't think of anything to say. However, after receiving several kind emails from people who have wondered if things are okay, I thought I'd write this brief post.

I've now been self-employed for 11 weeks and, although it hasn't been a particularly easy time, I feel liberated in so many ways. Steerforth Books didn't get off to a rip-roaring start, but thanks to the kindness and generosity of a fellow blogger (I won't embarrass them here, but I am eternally grateful), it received a huge boost and the business no longer feels like a pipe dream.

I've no idea what the future holds. I've swapped the dependable, but soul-destroying, certainty of my last job for something that makes emotional sense, but may lead to financial ruin. Have I made a terrible mistake?

All I know is that the worst decisions I've ever made have all been rational ones that appeared to make perfect sense, whilst the best ones have been inspired by childhood fantasies, daydreaming, gut instincts and my adolescent sense of right and wrong. In the last two months, I feel that I have become me again, after years in exile.

Perhaps this is my mid-life crisis. All of the elements are there: an aging parent, a child entering adolescence and the sense of having possibly passed the halfway point. Some men respond by dying their hair that weird, chestnut colour and sleeping with someone in their 20s. My ambitions are hopefully less ridiculous.

I apologise for the solemn nature of this post. I have just been to Sainsbury's in Newhaven and it always has that effect on me. I've no idea why.
Posted by Steerforth at 8:50 am 31 comments