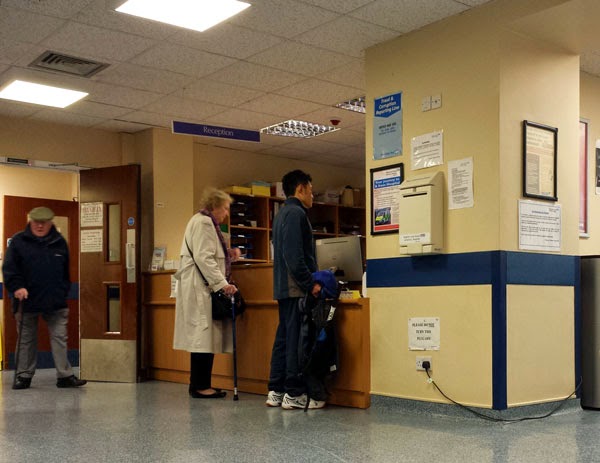 My book sales are slowly dwindling. I need to put some more stock on sale, but every other day I either have to drive my mother or older son to an appointment somewhere. Today, I accompanied my mother to the local hospital for a heart examination.

The receptionist of the cardiology department was morbidly obese - at least 35 stone (500lbs or 225kg), which seemed at odds with the posters advocating cardiovascular health. I wonder if she picked the job because it had an on-site crash team.

My mother was seen quite quickly and within an hour it was all over. Apparently her heart wasn't firing on all cylinders, but given that it's been beating non-stop since 1929, is it any surprise? I tried to sound shocked but, frankly, she's much healthier than most people of her age.

While we waited for a taxi, I went to get a cup of tea for my mother. The only place I could find was a Costa Coffee. The queue consisted of working-class pensioners who were completely baffled by the bewildering selection of flat whites, mochaccinos and cortados. "I just want a cuppa tea dear", one lady said plaintively, to a nonplussed Latvian barista.

Hospitals used to have small cafeterias serving weak tea and the sort of coffee that vaguely resembled washing-up water, but I suppose it's more lucrative to lease the franchise to a chain staffed by minimum-wage migrants.

People tend to say two things about the National Health Service. The first is that it is wonderful. The second is that it is in crisis. On my (admittedly anecdotal) experience of many visits to several different hospitals, I'd say that, for a free healthcare system, the NHS is surprisingly good, if not wonderful. And it isn't in crisis. At least, not yet.

The crisis will happen. When the welfare state was conceived, the average working man could be expected to retire at 65, tend his allotment for four to five years before doing the decent thing and expiring.

Today, thanks to antibotics, statins and anticoagulants, that same man will live for an additional ten years (at least) but often with a number of chronic health problems that require regular supervision and medication. As for his wife, she can expect to spend around a quarter of a century in retirement, consuming more drugs than Keith Richards, albeit prescription ones.

As the medication improves it will only get worse (or better, if you're an 80 year old who wants to live forever).

But by the time I am 80, I expect the problem will have solved itself, when civil order collapses and I am either beaten to death by an angry mob or eaten by my neighbours. Before I end my days, as I dig up a shrivelled, mutated turnip from the radioactive soil of my garden, I will look back longingly at the days when we thought that a crisis meant having to wait six months for a hip operation.
Posted by Steerforth at 6:29 pm 25 comments 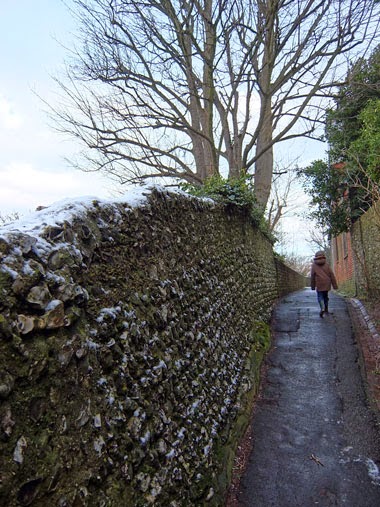 Today I accompanied my mother to a hospital appointment in Brighton. We went by taxi, which seemed liked a good idea until the driver cheerfully told us that he was being treated for a brain tumour and wasn't really supposed to be at work. I watched his erratic driving and wondered if my life was going to end where it began, with my mother.

While I was sitting in the back of the car, like a child on a day out, my mother talked about the light dusting of snow on the hills as if it was the beginning of a new ice age. The driver nodded and concluded that "There's worse to come, loike." 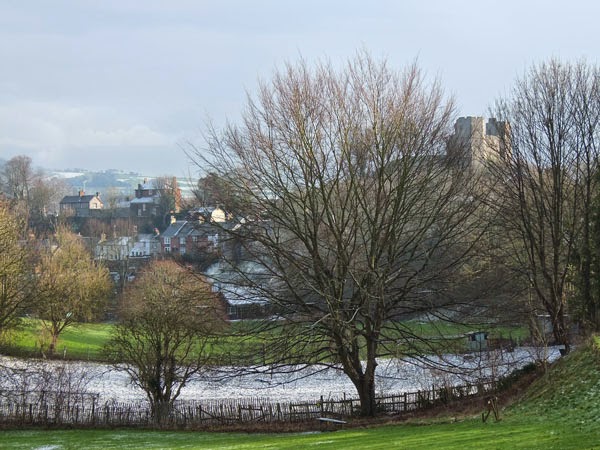 The hospital waiting room was packed and resounded with inane chatter about grandchildren and illnesses. I could tell that my mother was desperate to talk and I felt torn between being the good son and preserving my sanity. "I'm glad you could come with me. Vera wouldn't have been any good here. She has to have her leg dressed every day at the moment."

I knew that a graphic description of Vera's leg was about to follow, so I quickly got out my copy of Jonathan Franzen's 'Freedom' and started reading. My mother took the hint.

An hour later, we were met by a different taxi driver. My mother introduced him as her favourite and as they sat in the front, chatting about the weather, kitchen extensions and the terrible parking at the hospital, I couldn't help feeling that he was the son she should have had.

I wonder if I am a disappointment to her. 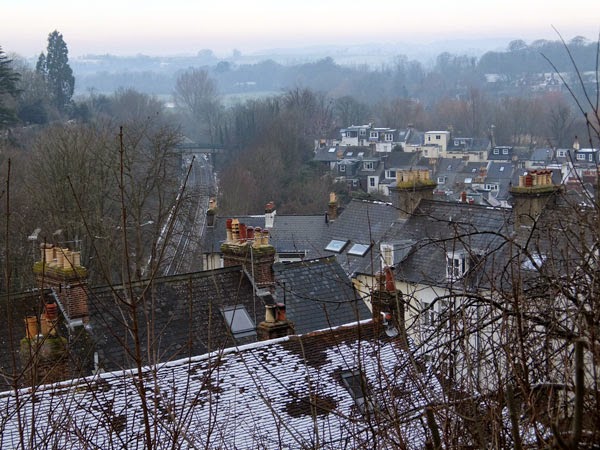 Of course it goes both ways. I would like a mother who occasionally showed some interest in what I was doing, or even asked me about the book I was reading. But how many people have easy relationships with their parents? I can't think of anyone.

One of the most perceptive and moving television dramas about family life that I've seen recently is HBO's 'Olive Kitteridge', adapted from the Pulitzer Prize-wining 2008 novel by Elizabeth Strout. Beautifully acted, this four-hour mini-series has been almost universally acclaimed, apart from a Guardian critic who complained that it was "slack" (it wasn't).

Here's a trailer, in case you haven't seen it:

In the background, you can hear a haunting arrangement by Martha Wainwright of a 1980 song from the album 'Xanadu'. I'd never come across 'Magic' before and have tried in vain to find Wainwright's performance. However, if you strip away the cheesiness, the original by Olivia Newton John is rather gorgeous too:

You may disagree.
Posted by Steerforth at 12:42 am 18 comments 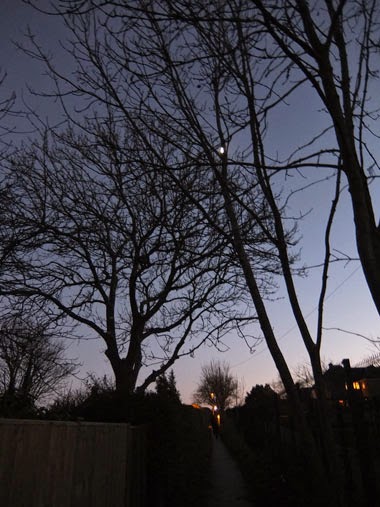 It has been an odd winter so far. Flowers are in bloom, flies have been lazily buzzing and clothing retailers are desperately discounting their stock of unsold thermal wear. So far so good, but the mild weather has also been accompanied by flash floods and the occasional gale force wind.

Is it climate change? I don't know, but I was disturbed to read that the number of flowers in bloom on January 1st had risen from around 40 to 436.

I've been taking advantage of the mild temperatures by going for several walks around the local area. I suppose it's part of my New Year's resolution - the one I have every year: lose weight, exercise more and drink less. It's always been a half-hearted crusade, but the death of a close friend has strengthened my resolve.

My other vague resolutions for 2015 are as follows:
The last resolution is particularly important. If I've had a difficult time with my older son, it's important to do something that breaks the mood. Unfortunately, working alone in a small room logging books only seems to exacerbate any feelings of impending doom. I miss having colleagues.

I hope that my son's predicament will improve this year. We're getting a lot more help and the local authority have agreed to pay for him to go to a specialist school (something that only happens if every other avenue has been exhausted). All we have to do now is get him there. I really hope he goes, as it's a fantastic opportunity.

But I digress. The original point of this post was simply to share a few photos from today's walk around Lewes. First, a typical local scene: 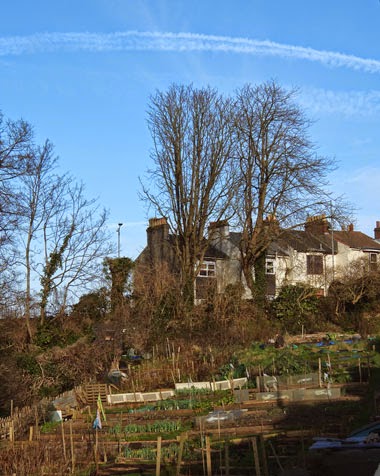 These public allotments have a ridiculously long waiting list, as the bien pensants of Lewes all want to  prepare themselves for the post-oil economy by growing a few radishes. I'll die before my turn comes up.

One time I walked along the road next to the allotment and saw Kevin Bacon, which must get me top marks in the Six Degrees of Kevin Bacon game (in case you were wondering why he was there, he was filming a commercial. Not one for allotments). 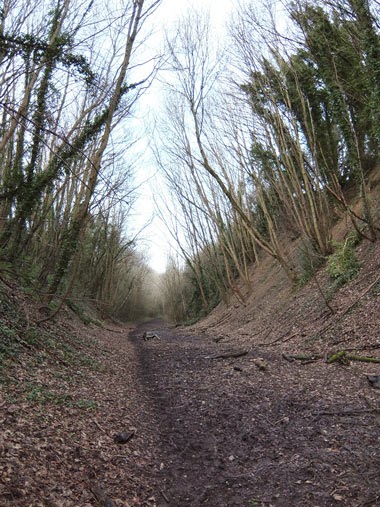 This disused railwayline, on the eastern side of Lewes, has a unsettling, post-apocalyptic atmosphere. It looks innocuous enough in this photo, but the abandoned sidings and eerie silence suggest that a disaster has taken place (other than the Beeching Report). 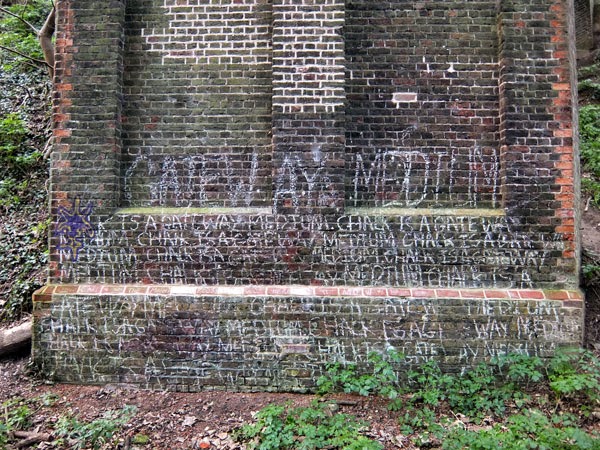 I wondered what it all meant.

Later, I Googled the phrase, not expecting to find anything. To my surprise, this YouTube clip appeared:


The video left me none the wiser, but an additional one minute's research suggests that this phrase comes from the LAPD, who sent officers in riot gear to arrest Occupy protesters who were writing slogans in chalk.

Accused of being heavy-handed, the police allegedly replied that chalk was a "gateway medium" to full-blown vandalism. Naturally, this phrase invited ridicule.

Further along the line, to add to the sense of unreality, a nearby tree had this earring hanging from a branch. It felt like a clue in a second-rate detective drama. 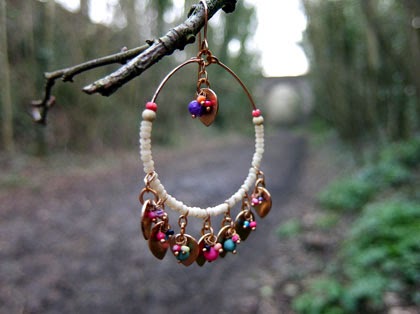 As I examined the jewellery, I heard my wife saying "Ugh, that's horrible. Don't tell Dad. He'll want to take a photo of it." I turned and saw her looking at something on the ground. 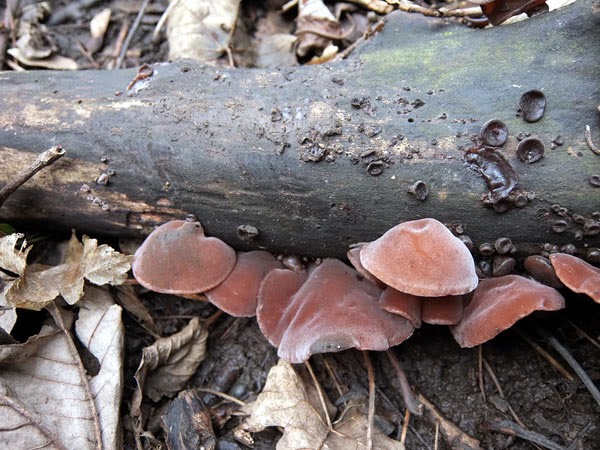 The Chapman Brothers in Hastings 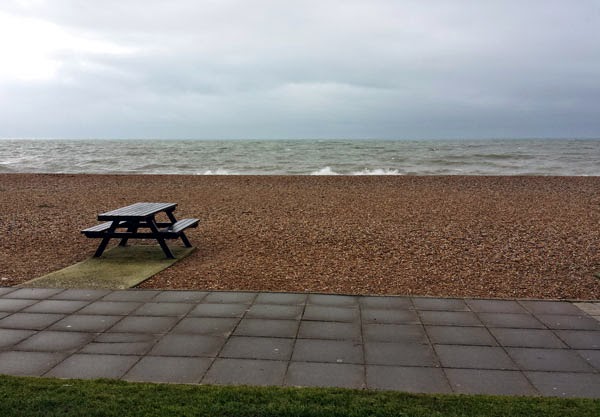 This morning I drove to Hastings, listening to a woman taking about death. It was quite fitting, as I was on my way to see the Chapman Brothers' exhibition before it closes on Wednesday. 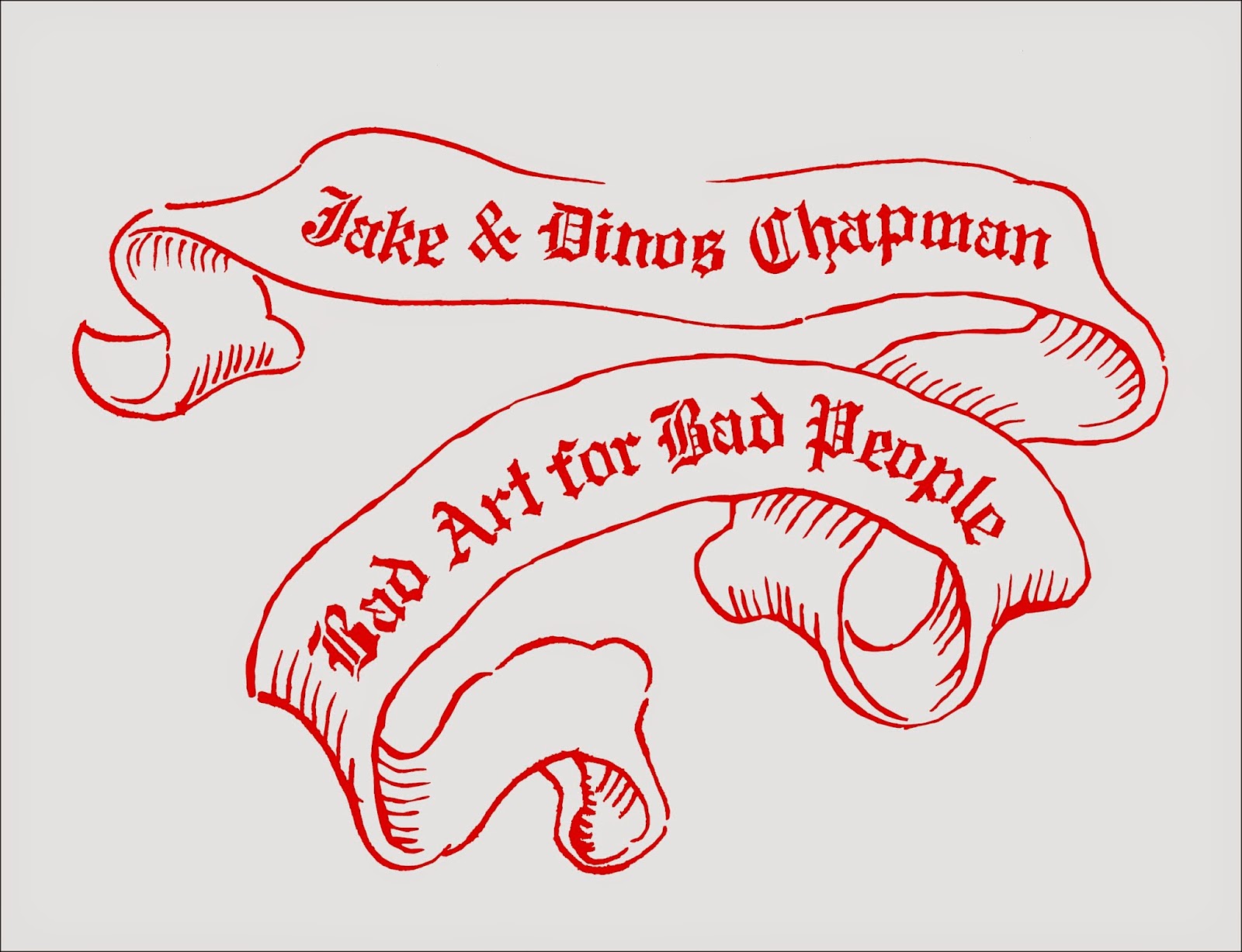 Jake and Dinos Chapman seem to have a knack of upsetting people. Their Facebook page includes the following comments:
Inspired by Bosch, Goya and the Holocaust, works like this excite strong feelings, from admiration to outrage: 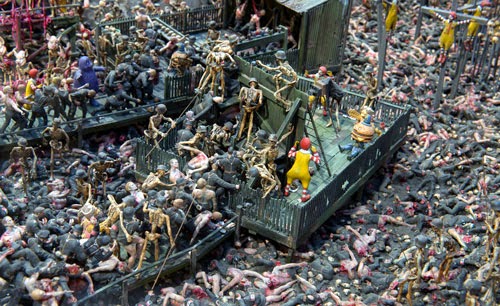 I must be a bad person, as I admired the apocalyptic scenes of Nazi soldiers, skeletons and crucified Ronald McDonalds . I felt that the Chapmans' art had a clear moral purpose, compared to the lazy, sixth form humour of a work like Martin Creed's prize-winning 'The lights going on and off'.

Their art also made me laugh: 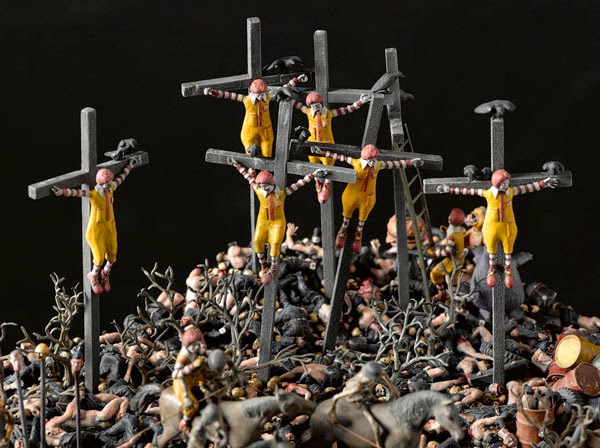 Asked to explain the reason for the Ronald McDonalds, the Chapmans provided this explanation:

"We take McDonald’s as being a marker of the transformation from industrialisation to the end of the world. McDonald’s once represented the idealism of fast food and the space rest era. Now it’s consistent with the dilation of the ozone and a litigious clown who’s lost his sense of humour."

I'd always perceived the Chapmans as one-trick shock jockeys, gaining notoriety by deliberately picking the most contentious subjects. Visiting the exhibition made me revise my half-baked ideas, realising how much thought and hard graft had gone into their work.

In contrast to the horror and depravity of the Chapman Brothers' art, the De La Warr Pavillion in Bexhill is having an exhibition of art from the Ladybird books, beginning on January 24th. As a lifelong fan of Ladybird, I can't wait.