Given that my nom de blog owes its existence to David Copperfield, it would seem rather ungrateful to ignore the fact that today is Charles Dickens' 200th birthday.

Here he is, painted by one of his friends, my wife's great-great-great uncle, William Powell Frith: 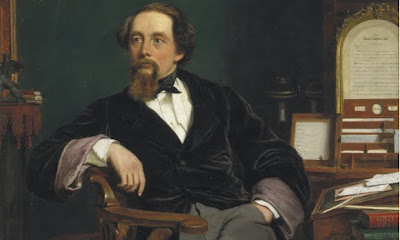 Everybody loves Dickens. A few of the hardcore fans even read his books, but most people are content to enjoy the lavish BBC adaptations, denuded of any of that nasty, dense prose that makes them take more than a week to read.

They don't know what they're missing.

I will be paying my own tribute later today, by not throwing any Charles Dickens books into the recycling bin at work.

The last Dickens novel I read was Bleak House. I was alone in Chile, staying in a small town at the foot of a volcano. It was winter in England, but the middle of summer there and I spent long afternoons lazing by a deep blue lake. It was an idyllic setting.

But I was homesick. I hadn't spoken to anyone for nearly two weeks and was feeling increasingly isolated. Then I started reading Bleak House and found that I was no longer travelling alone. Dickens remained my constant companion for the rest of the journey and I found solace in a lost world of damp, ivy-clad stone, autumnal woodsmoke and long shadows.

I have a secret fantasy of being stranded again in another part of the world, with only a Charles Dickens novel for company.

But rather than write any more, I will let Mr Dickens have the final word, with a small selection of quotes:

The whole difference between construction and creation is exactly this: that a thing constructed can only be loved after it is constructed; but a thing created is loved before it exists.
The civility which money will purchase, is rarely extended to those who have none.
Regrets are the natural property of grey hairs.
No one is useless in this world who lightens the burden of it to anyone else.
It was one of those March days when the sun shines hot and the wind blows cold: when it is summer in the light, and winter in the shade.
There is nothing better than a friend, unless it is a friend with chocolate.Suffering has been stronger than all other teaching, and has taught me to understand what your heart used to be. I have been bent and broken, but - I hope - into a better shape.No one who can read, ever looks at a book, even unopened on a shelf, like one who cannot.

There's a little bit of me in that last quote. I
I remember being allowed to pick up a Dickens manuscript once and it was thrilling.

Did he really say that about a friend with chocolate? Why did Cadbury's never think of using it? I am passing it on. Thank you.

As if to underline the importance of the day, even the word verification is struggling to sound slightly Dickensian, with pidgergm.

Stuck in bed for a week recently, I re-read Great Expectations, having decided to give the Kindle a workout and downloaded his complete works for about tuppence. Slightly to my surprise, the Kindle turned out to be the perfect way to read Dickens - something to do with short pages, maybe? I absolutely romped through GE, and I'm now halfway through Our Mutual Friend. Have now downloaded the complete Hardy and the complete Conrad and have the uncomfortable feeling that I may have overdone it...

Here's to Dickens! Glasses will be raised this evening in our little corner of Upper Canada.

A word of caution, if I may, regarding the now not-so-secret fantasy: Do consider the sad fate of Tony Last in Waugh's A Handful of Dust.

yes, they toasted D's birthday today on NPR. I have read many of his books though seen but a few movies. However, the musical "Oliver" is a fav. love his characters. I too am taken w/the chocolate quote. and the final quote.

they said big celebrations would occur in England with 200 descendants of Dickens attending. 24 hour readings of his prose or something like that. Wow.

Rog - You lucky man! Did you have to wear the special gloves?

Lucille - It could be next summer's 'Keep Calm and Carry On'. I'm going to start making the t-shirts, mugs and tea towels.

Martin - It does sound very Dickensian. I used to wonder why the names were so odd until I read that Dickens made them up because he was paranoid about being sued for deformation of character.

Mike - I agree. So many classics are crammed into paperback formats by using small fonts and it's offputting. I find them much easier to read on a Kindle and Project Guttenberg's free downloads make me feel like a child in a sweet shop.

Brian - Good point! A Handful of Dust is one of my five favourite novels, so I don't know why I didn't think of poor old Tony.

I love William Powell Frith, Dickens is growing on me.

It's scandalous that the Tate kept many of WPF's paintings in a basement, along with many other popular Victorian works. My wife's grandparents were allowed to see them after a few letters were written.

Frith had no illusions about his gifts: "I am not a great artist, but I am a very sucessful one." I think that success was held against him in the decades after his death.

Thank you Steerforth, I wasn’t able to post on Dickens’ actual birthday, so it was lovely to read this tribute. Well, my non de plume will have to speak for me instead as it too is borrowed form the great man’s works. Oh, and thank you for allowing me to swoon once more over the gorgeous Anthony Andrews

Dense prose? Long words? Struggle? Dickens is a page turner, a laugh a line. Just start reading... Maybe it helps if you read "out loud" to yourself in your head. (Doesn't everybody do that?) Dickens was a journalist who loved melodrama - he was always taking off the pompous by sending up their language and writing dramatic scenes.
Great Expectations or David Copperfield both start written in a child's voice. Hardly stodgy or hifalutin'. Sorry, but you can't be a Dickens lover unless you read him. Helps if you understand irony. (A journalist and former playwright writes.)

Nell - That clip has made me want to see the 1974 adaptation again. Andrews is a great actor who made some dodgy career choices after Brideshead.

Richmonde - I think most classics are page turners (that's why they're classics, innit?), but trying to get Joe or Jo Public to read them was an uphill struggle when I was a bookseller.

It used to break my heart to see someone buy a Jeffrey Archer novel when, right next to the paperbacks table, was a section containing some of the greatest ever novels written.

People complained that the prose was too 'wordy'. I assured them that after a dozen pages, they wouldn't even notice it, but most wouldn't take the plunge.

The one place where I managed to sell clasics by the yard was Waterstone's in Richmond. Indeed, I had so much success with one title, I made it go out of print.

What a fantastic collection of quotes. Is the one about chocolate really his or did you sneak it in to catch unwary readers out?

I think Victorian novelists are much (and unfairly) maligned. As you say, many of the novels were written to be serialized in magazines. People eagerly awaited the arrival of the next chapter, much as today's viewers can't wait for the next installment of Downton Abbey.

Thackeray is another author whose works were serialized in periodicals. I read "Vanity Fair' while riding the bus to and from school. The chapters were the perfect length to last for the one way trip. Probably the best and most memorable part of my school days ...

Did he really say that about the thing constructed? Chesterton uses it in his introduction to Pickwick Papers in the Everyman edition, which I remember because I was reading it only yesterday. Perhaps he stole it from Dickens?

Anyway, good post. I wish more people would read Dickens; they don't know what they are missing.

I read Bleak House while traveling through Europe after graduating from college in the U.S. While the days were filled with the adventures and misadventures of traveling on a budget, staying in (sometimes) grungy youth hostels, an encounter with a child robber, and oddly timed train journeys, every night before bed I'd return to Dickens and get lost in the story. I think it gave me the same comfort I got as a child when hearing a wonderful story read by a parent. (I also recall Esther Summerson to be more psychologically complex than most of Dickens' other female characters, but I'm not sure if memory serves me well.)

Dickens is a great time-filler. In Victorian life the written word had to fill up all the time we now devote to TV, etc: people wanted books to last forever, so writers obliged. Today we have five minutes here and half an hour there; who wants to tussle with long, impenetrable sentences at 11pm after a long day of Brand Wheels?

To best enjoy Dickens, get yourself stuck somewhere with no one to talk to, as recommended above.

What's next? Our Mutual Friend aboard a yacht becalmed in the Horse Latitudes?

I am a huge Dickens fan too, however he did not say the Chocolate quote- that is actually from the Printwick Papers which is often confused with the Pickwick Papers. I think I would have remembered if that quote were in one of his books so I did a little research...