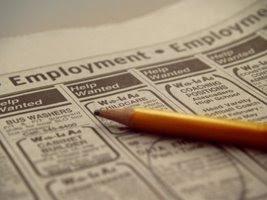 Six months ago I was feeling mentally and physically exhausted by my work at Waterstone's. Every night I would lie awake in the small hours, worrying about what would happen if I lost my job. I was Mr Average, with a wife, two children and a mortgage. I was convinced that I had to keep working at any cost, otherwise everything would fall apart.

Then one day everything changed.

I had a rare moment of clarity and self-awareness and after asking myself what could be worse than losing my job, realised that the answer was keeping it. In a single moment, everything fell into place. I felt like Peter Finch in Network (minus the madness, I hope).

That's the short version, anyway. Obviously it was a little more complicated than that, but in a nutshell I stopped working in December and officially resigned a couple of months ago. Contrary to expectations, my world hasn't fallen apart, I still have a few quid in the bank and I'm so busy that I don't know how I ever found the time to do a full-time job. At the moment I feel as if I'm on a very long holiday, albeit a rather busy one.

However I'm starting to get restless. Once the novelty value of not having to go to work wears off, you are left with the question: what is my purpose? I do part-time voluntary work as magistrate and also have two young boys to keep me busy, but I feel that it is a little early in life to be semi-retired so I've started thinking about the next move.

The Guardian jobs section is particularly depressing. I've been through the adverts in last week's edition of Work and found a number of recurring words:

I used to be most of these, but not since I was under the age of ten. I had the impression that these qualities became superseded by things like empathy, wisdom, knowledge, integrity, commitment, compassion and vision, but perhaps they're not compatible with the corporate culture.

What is the answer? I'm not sure, but I don't think there's any point looking in the Guardian again. I shall have to think of something else.

In the meantime, here is Peter Finch in Network. 32 years on, this clip still strikes a chord:

Posted by Steerforth at 6:51 pm

Yes, I looked at that list last night and all I felt was tired. I'm not dynamic and enthusiastic. I don't want to work in a fast-paced, dynamic environment. With me it's The Herald rather than The Guardian. The simple fact is I don't want to be the guy I was before because that guy will put me in an early grave. He's already worked me to the point of exhaustion twice in the last ten years and every time it gets harder and harder to bounce back. Working as a magistrate will certainly do your CV no harm and a lot of the qualities you mentioned will be attributed to you simply because of that position I'm sure.

I would suggest looking at the job sites online. I use s1.jobs here in Scotland but I'm sure there'll be a decent site in your area. And then there's the agencies – again, if you can connect with a decent one. My experience is that these girls (it always seems to be girls) are run off their feet and can't be nearly as proactive as they'd like.

One word of advice, look before you leap. I took my last job because I thought it was going to be fairly quiet and it turned out to be the busiest job of my life. If you see that kind of scenario shaping up then start looking again. You don't have to quit right away but don't settle, don't make do.

I can't think of anything worse than a fast-paced, dynamic environment. I LIKE working in a bookshop. Glad it's no longer the big W, though - I can now recommend books EVEN IF we haven't been given a massive bung from the publisher... and look on the bright side, you will never have to go through the disgusting and depreessing cycle of de-sticker/re-sticker ever again!

Thanks Jim - it's good to hear from someone who has already gone through this experience. Agencies do appeal in some ways - the lack of long-term commitment means I can afford to make mistakes and pick up some useful experience along the way.

Lucyfishwife - I'd love to know where you work. I thought Waterstone's had bought everywhere!

No more stickers sounds good to me and no more 'Have you got a Waterstone's card/Did you find everything you wanted?/Would you like to buy this £15 book for £5? etc etc' nonsense.

Oh my GOD the "add-on sales" thing, how I don't miss that.. and the period in October they called "Early Gifting".. blechhh. I am in the independent sector (finally!!!!!) - I miss my ex-W colleagues a lot, one thing you can't fault the W on is their ability to find fantastic, interesting, well-read people and exploit them to the hilt.
Will link to your blog too! Thank you!

Network is one of my all-time favourite films (in favourite film list on my blog no less) and as TRUE now as it was 30 years ago!

This posting ties in neatly with your previous posting about corporate bullshit re the b/s wording in job ads.

I have been looking for another job recently and have been subjected to all the same cr*p, though it can be quite amusing visiting the prospective employer's websites and comparing the differences between what you read there and the job ads.

My poet friend Oliver at http://oliverspoetryblogspot.com did a wonderful piece on the ghastliness of Headhunters too last year after being subjected to a particularly awful interview with one.

Good luck in your efforts to find something more akin to the 'new' you however. Glad you have been managing financially in the meantime.

wow, i am also post-W by about 3 weeks. still too scared to say anything though after i put up a picture 2 years ago that had a W on it and had a delegation from london up to see me. all of h.r have read my blog in full!