Although it's only 13 miles away, I never go to Eastbourne. I don't really have anything against the place, but its reputation as a rather dull geriatric coastal resort full of nursing homes and dingy guest houses isn't a great draw. Eastbourne is reputed to be a place where people go to die.

However, today I woke up feeling restless and the word Eastbourne kept nagging me insistently (intimations of mortality?). I'm a great believer in following a whim so I decided to take a chance and drive there, even though I had no idea what I was was going to do once I'd arrived.

I'm glad I followed my instincts because today I discovered one of the best secondhand bookshops I've ever seen: 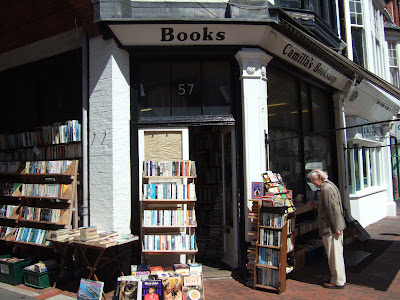 Only a few minutes' walk from Eastbourne Station, Camilla's Bookshop has three floors that are crammed from top to bottom with books. This area is just inside the main entrance: 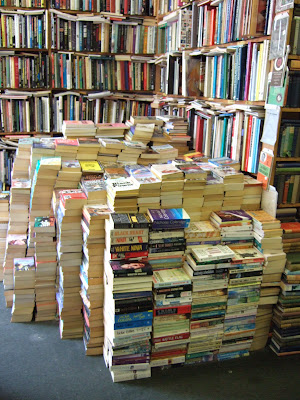 And here is a photo of a small part of the labyrinthine basement: 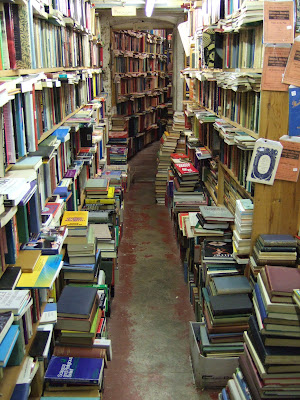 The initial impression is one of organized chaos, but the sections are far more ordered than they look and this section of Penguin paperbacks is in strict alphabetical order: 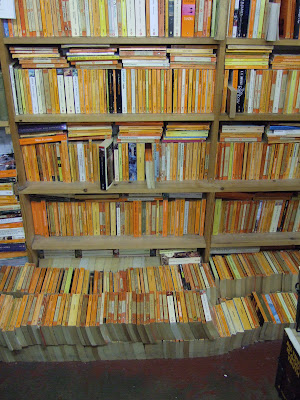 Although these Pelican titles seem to be in a slightly more random arrangement: 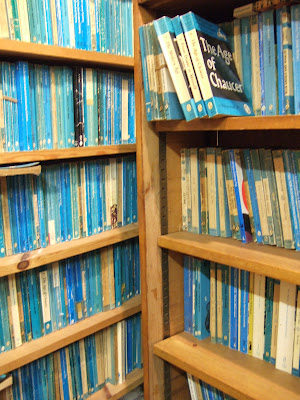 The Pelican jackets are masterpieces of design and when I get the chance, I shall return and take some more pictures. 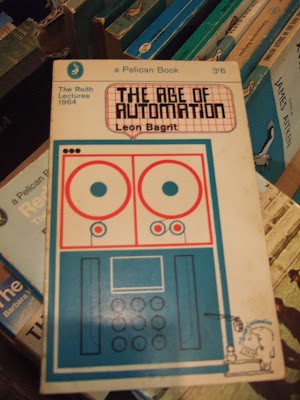 Sadly, like many local councils, Eastbourne's seems to be on a mission to deter people from visiting the town and I only had enough change to pay for an hour's parking. I resented having to cut my visit short, but perhaps it was a good thing as I could have spent a fortune. In the end, I spent a fairly modest £9.50 on eight paperbacks, including Ballard's Drowned World, Muriel Spark's Robinson and a title I'd never heard of, One by David Karp.

Camilla's Bookshop is a paradise for anyone who loves browsing and it's the antithesis of today's bestseller-driven chain stores. I can't wait to go back.

Walking back to my car, I was pleased to see this bookshop: 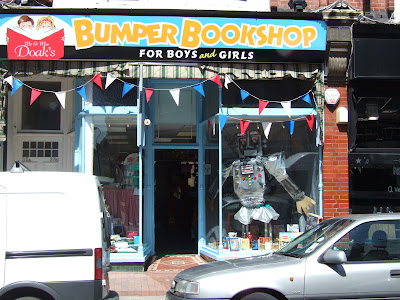 Two years ago, Jeff Doak ran one of the most profitable branches of Ottakar's, but when HMV Media bought the company they decided to convert Jeff's shop into a branch of HMV, as there was already a branch of Waterstone's in town. The staff were only given few weeks' notice and were expected to work up until the last minute, boxing up their stock to return to the publishers and other stores. To add insult to injury, they were asked to relinquish their Waterstone's staff discount cards.

After a period of uncertainty, Jeff Doak decided to open a bookshop of his own, using his house as security against a bank loan. At the time the general consensus was that he was taking a huge risk that could easily end in tears, so it was heartening to see that his shop was full of customers.

It's only a tiny shop, but somehow Jeff has managed to squeeze in a really good range of children's books and a coffee shop! The shop is bright, colourful and welcoming and if lived in Eastbourne, I'd be a regular customer.

I didn't see a lot of Eastbourne, but Camilla's Bookshop alone is enough to tempt me back. There are worse places to die in.

On the way back, I stopped at Beachy Head - the suicide hotspot of Southern England. The wind was so strong that I almost got blown off the cliff edge. I expect that some people would have assumed that I'd taken my own life. However, I hope that my bright pink Camilla's Bookshop carrier bag, bulging with eight novels, would provide evidence to the contrary. 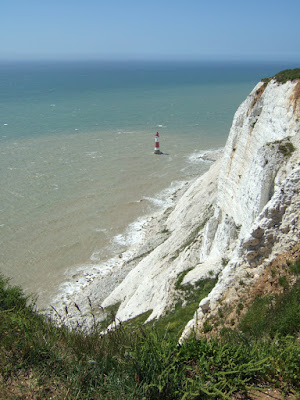 Posted by Steerforth at 3:30 pm

That shop looks amazing. Second-hand bookshops like that always induce a mild panic in me, since I usually find them in cities I won't be returning to in the forseeable future, and I know I'll not have time to explore them properly and dig out all the treasures--especially when my wife is standing by my side, rightly pointing out how many unread books are already crowding her out of her own home.

Great post. I often imagine that books are their authors and in a place like that would feel safely surrounded by wonderful and fascinating characters from past and present. Unlike some 'modern' bookstores where I've felt unwelcome, as though intruding on a boardmeeting perhaps. Well-designed and maintained flow-through channels just make me flow-through.

Camilla's Bookshop looks wonderful. Only this week I took a writer friend on a trip around the little book shops hidden in Glasgow's west end. There's one where the books on the floor are piled so high they obscure the bottom two shelves on the bookshelves and there is next to no order. It's a magical place. All the others, although they have their charm, have nothing on this place.

This is a very interesting blog. Why are there no older posts/newer posts links, so I can read the rest of it? Or do I just have a technical problemM

By coincidence a former regular customer who has since moved to Eastbourne, was in the shop yesterday singing the praises of Camilla's.

He still ordered a book from me though.

I almost always find myself nodding in agreement with you, in particular over the Ottakar's/Waterstone's outcome and your recent change of life (I escaped all the corporate craziness myself four years ago for a life of pensioned poverty but no regrets about the decision). This is the first time I have been moved to turn the nodding into text but I just had to endorse your opinion of Camilla's. It is a simply wonderful place and if I could get a pot of tea there too, I would move in. I was glad to hear that the local Ottakar's manager is still in the book trade. I still haven't recovered from the shock of discovering that an assistant in its local rival/nemesis had never heard of P.G. Wodehouse.

BBB - I know exactly what you mean about the books. I felt this at Camilla's when I was lone in the basement, surrounded by thousands of Penguins.

Rooftrouser - good to hear from you. I'm shocked (but not surprised) by the Waterstone's anecdote!

It's worth noting that according to Wikipedia (or a source quoted therein), in 1424 the library of Cambridge University owned 122 books "each of which had a value equal to a farm or vineyard."

I've visited Camilla's Bookshop several times, and have usually come away empty-handed, because not only are the sections I'm interested in almost impossible to browse but, once I do succeed in actually reaching the books they turn out to be an uninteresting selection. Yesterday I was hanging dangerously off a ladder trying to reach the top shelves of the technology section (I failed). In a bad mood, I thought of commenting to the staff that most of the books could be pulped and the rest actually sold at a profit, when I realised what Camilla's is all about- it's a dump of third-rate books- all the interesting stuff gets diverted elsewhere, and the residue piled up in hopes that some browser might pay inflated prices for it. This may seem a harsh judgement, but you could try an experiment. Go with someone who has a specialist interest in a subject (mine is railways) and get them to browse "their" section. I expect they'll comment that it's been weeded more severely than Bob Flowerdew's cabbage patch. Not as bad as the Book Barn though...