Dungeness is a strange place. Over thousands of years nature has reclaimed land from the sea, creating a vast, flat, desolate landscape of shingle ridges. There is no soil, but somehow plants manage to thrive and in spring the beach is covered in sea kale and wild flowers. To add to the strangeness of Dungeness, there are two nuclear reactors and the very late Derek Jarman's house: 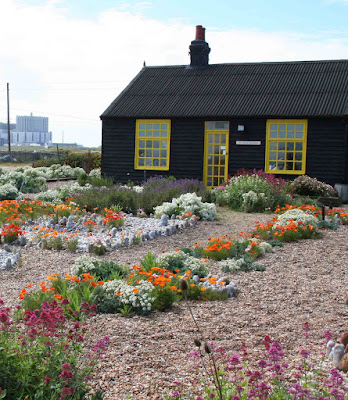 Last week we took a friend to Dungeness. I was uncertain how it would go down with my two sons: they are both blissfully ignorant of the films of Mr Jarman and the oldest one has a phobia of radiation, which only emerged when he was due to have an x-ray in Brighton Hospital. I needn't have worried. Both boys loved the beach, with its abandoned boats, driftwood and flotsam. 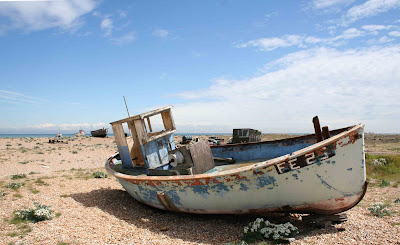 There is something post-apocalyptic about this landscape and the abundance of weird plants recalls the genetic mutations of the Badlands in John Wyndham's Chrysalids. I climbed into one of the boats and although it wasn't seaworthy, it was in reasonably good condition. Why had it been abandoned? 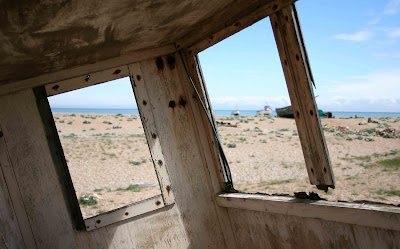 As for the beach, where was everyone on this bank holiday weekend? We had the whole place to ourselves and it wasn't hard to let the imagination wander and believe that we were the last people left. 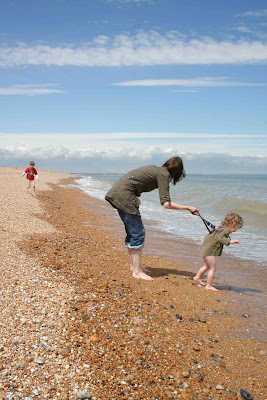 I had been here before, when I was four. My parents booked a week in a nearby holiday camp, but could only afford off-season. We spent a miserable time which was mainly spent cowering in bus shelters from the wind and rain, sitting in dining halls listening to several hundred of our fellow guests slurping thin, watery soup and, worst of all, the cabaret performances of artistes who hadn't made it to Butlins. I reflected on how things had changed but on the way back we passed a Pontins, so some poor buggers are still enjoying overcooked food and toupe-wearing singers.

Dungeness is a fascinating place in its own right, but the interest is compounded by the presence of two buildings that contain lethal radiocative material. I would love to visit the reactor complex. A few years ago there was a visitor centre, opened in an attempt to change the public's attitude to nuclear power. Since '9/11', security has been stepped up and guests are no longer welcome. I've tried contacting Dungeness power station through the internet, but it is very difficult to find any point of contact.

Of course, Dungeness is small fry. Serious nuclear tourists go to Chernobyl, which now has guided tours of the evacuation zone. From the comfort of a luxury, air-conditioned coach, you can see how nature has recovered from the disaster and even visit the fairground in Pripyat. However, although many claim that the area is now safe, there are still hotspots.

Click on the radiation symbol for this scary video: 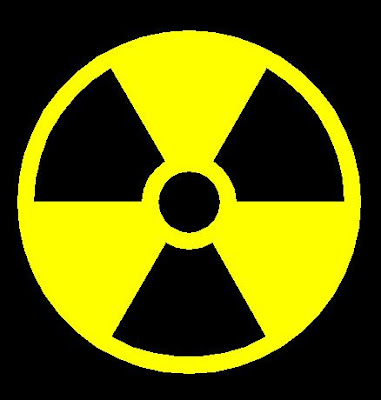 Posted by Steerforth at 7:45 am

My head is not very bright this morning. When I looked at your title I saw 'Dungness' and I thought, Dungness? What that then, how dungy something is? I was quite disappointed when I found out it was just a town.

I also love the way you drop in 'phobia of radiation' as if that's a bad thing.

Not bad, but slightly disturbing that a young child should be worrying about such things.

Maybe I shouldn't have shown him those A-bomb tests on YouTube...