Hell is other parents

In my head I have an idealised version of parenthood in which my children grow up as confident, happy individuals and perhaps, when they're famous, I'll be asked to contribute to the Sunday Times' Relative Values feature. My sons will say what a brilliant example I was and fondly recall anecdotes from their idyllic childhood. It will be Enid Blyton meets Peter and Jane. 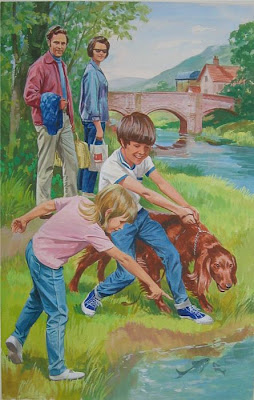 The reality is sadly quite different. Most of the time, we go to Tescos, watch television, get fed-up with each other and spend too much time on the internet. Rainy days are the worst. My older son hates playing with toys or board games, so he moans incessantly until we allow him to play PS2. The youngest son's attention span is limited to five minutes, which makes him hard to entertain. I often end the day feeling a dismal failure as an example of fatherhood.

However, there are occasions where our lives briefly collide with the ideal. The weather is good, the children are happy and it almost feels as if this is the beginning of better times. I experienced this briefly last Sunday when I took my sons pond dipping in the local nature reserve.

We arrived early in the morning armed with fishing nets and jam jars and began searching for frogs, sticklebacks and tadpoles. Unlike some childhood activities, I still find playing in rivers and ponds as engrossing as I did when I was a boy. Peering into the murky depths of the water, all sense of time is lost and you become attuned to every little noise and movement in the water. This must be the attraction of fishing.

After a while, we were joined by a man and his three-year-old son. The boy looked perfectly normal, but the father was short, with black hair cut into a pudding basin shape and a beaky nose - he could have been a stunt double for Roman Polanski.

'WELL THEO, LET'S SEE WHAT WE CAN FIND TODAY!' he bawled in a high-pitched, middle-class, sing-song voice, with the exaggerated enthusiasm of a children's television presenter. This is one of my wife's bugbears - fathers who talk to their children in a loud voice so that we can all hear what a great dad they are.

'LOOK! LOOK! A FROG THEO! DID YOU SEE THE FROG THEO?' he exclaimed, almost jumping with excitement. My older son and I exchanged a glance.

'OH DEAR! HE GOT AWAY!' Suddenly, he marched over in our direction and thrust his finger at our jam jar. 'LOOK THEO, THEY'VE GOT SOME FROGS!'

I quietly fumed and ignored the man, but then I started to feel guilty. Why was I so bloody anti-social? If I go anywhere I always pick the seat or table furthest from anyone else. Why couldn't I just smile and show the frogs to the father and his son?

My wife arrived and I wondered what she would make of Captain Beaky. I was expecting a lecture on accepting that other people were equally entitled to come here, but after a couple of minutes of listening to him exclaiming and bounding around, she whispered 'Yes, he's fucking annoying.'

Eventually my oldest son saved the day by suddenly saying 'Excuse me, could you leave us alone please?'. He said it with a polite, innocent, formality that made him sound like a child from a Victorian novel, but the message couldn't have been plainer.
Posted by Steerforth at 4:13 pm

What your tribe need is lashings and lashings of ginger beer with a darn good picnic spread!

And a handy uncle and aunt with an equally handy castle with secret passages in to go and play in by a Smugglers' Cove in the summer hols.