A strange day in Iceland

In Journey to the Centre of the Earth the extinct volcano of Snaefellsjokull is the gateway to the underworld, so when I visited Iceland last May I had to go there. The day started quite well. I left my hotel well-prepared and began the seven-mile drive that would take me to the edge of the glacier.

Unfortunately, two miles into the journey the road became quite steep and narrow, with a surface of lose volcanic rock and dust. My Toyota Yaris started to struggle until it finally ground to a halt, unable to get a grip on the road's surface. I tried edging forward very slowly, but the car didn't move an inch. The road was too narrow to turn round and to my right there was a sheer drop. What should I do?

I wondered if it was possible to reverse down to the main road, but the prospect of going backwards down an unfamiliar winding road for a mile didn't fill me with confidence, particularly as I could end up going off the edge. Then I had a dim recollection of seeing someone face this dilemma in a very bad film. Their wheels had spun round, digging deeper into the dust and the situation looked hopeless, but they had got out of it. How? I couldn't remember, but something was telling me to put lots of rocks under the wheels to get a grip. I grabbed several handfuls of volcanic rock of pushed them under the tyres, then got back into the car and very tentatively raised the clutch until I was in first gear. The car started to creep forward. I went into second gear, desperately hoping that I wouldn't get stuck again and drove for a few hundred yards until I reached a turning point.

I knew that I couldn't go any further and decided to have a short break before going back to the main road. It was here that I discovered this cave: 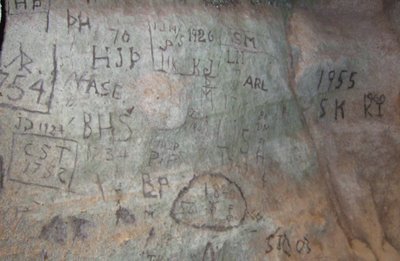 The inside was covered with dates, names and enigmatic markings. In most other countries in Europe there would have been some sort of visitor centre and gift shop attached, but the wonderful thing about Iceland is that you can have a cave all to yourself and test the acoustic by singing to your heart's content, which I did.

Back in the car I nervously crept back to the main road and headed for the northern coast of the Snaefellsness peninsula, where I came across this strange-looking building... 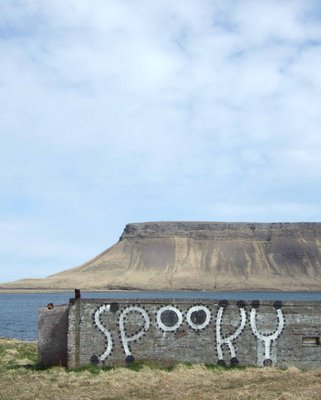 With a recommendation like this, I had to explore it.

In America this would probably have been the home of a serial killer, patiently waiting for chinless wonders like me to stumble through the front door before falling into a specially constructed pit. However this was Iceland and Arnaldur Indridason aside, I felt confident that I was in a safe place. I parked the car and cautiously walked towards the building, hoping that no-one was there. The doors were hanging off their hinges and inside, the place look as if it hadn't been occupied for years. 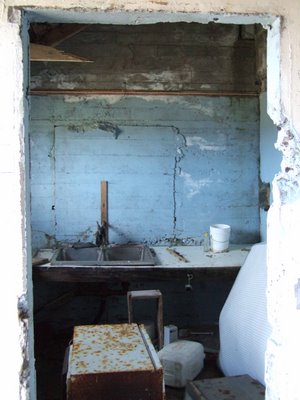 A stained mattress propped against the wall showed that someone had once lived here but thought better of it. Most of the rooms contained fishing equipment, including a yellow souwester, parts of a boat and some netting. 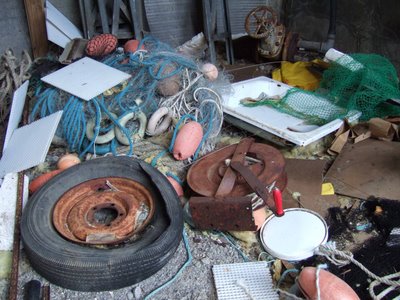 This room was in serious need of some feng shui. By now I had realised that there was a fishing theme to the house and expected to find lots of cod bones, but outside the ground was covered in seashells. 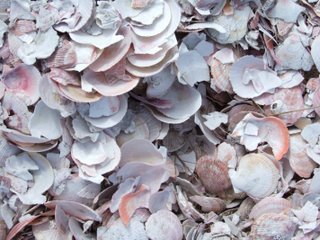 In another room I found a this strange combination of objects. In the unlikely event that any sea fishing experts chance upon this blog, I would be interested to know what is going on here: 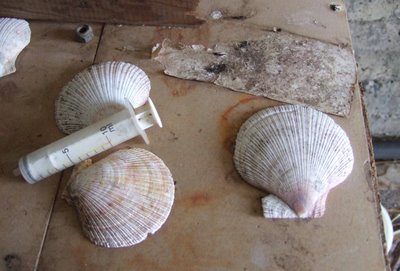 It was an eerie place, made stranger by the fact that it looked as if it had been abandoned in a hurry. Most of the rooms contained equipment that could have been salvaged and put to good use somewhere else, but they had been left to decay.

Just as I was about to leave, I found another door and discovered my serial killer basement. There was a hatch in the floor and a makeshift ladder led down to a cellar where all sorts of strange equipment littered the ground. I've no doubt that ropes and chains are an essential component of a fisherman's toolkit, but I had watched too many films and my imagination started to take over. I left.

I continued to explore Snaefellsness until the evening began to draw in. On the way back I stopped by a river and for the first time in my life, bent down, cupped my hands and drank the water. It tasted better than anything I'd ever had before. It reminded me of The Voyage of the Dawn Treader, where the water in the west became so sweet that you could drink it.
Posted by Steerforth at 12:27 am

What did you sing?

(I do apologise for commenting on these four-year-old posts, but I'm going through your archives starting from the beginning)

(in case you couldn't tell)

It was the bass part of the first movement of Faure's Requiem - lots of long, deep notes that reverberated nicely around the walls.

Plus "Going Underground", sung in the style of Noel Coward.

Oh, fine choices both. And probably startling to the wildlife.

I confess I was a little hopeful it was Bjork's 'Hyperballad', being both geographically and thematically appropriate:

we live on a mountain
right at the top
there's a beautiful view
from the top of the mountain
every morning i walk
towards the edge
and throw little things off
like:
car-parts, bottles and cutlery
or whatever i find lying around

it's become a habit
a way to start the day

Bjork would probably have been too obvious, though.

I didn't have my "jetto blaster" with me.