The dark side of Ladybird...

In my recent homage to Ladybird books I commented that they were set in an idyllic world where the sun always shone and there were no dark thoughts. That was before I discovered this chilling illustration from the Ladybird Book of the Cub Scouts... 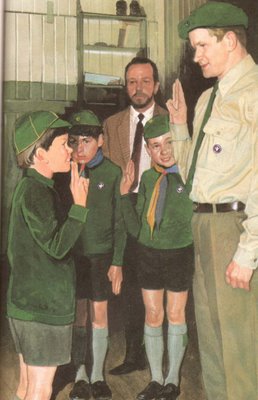 At first it all looks innocent enough, but further scrutiny reveals a more menacing dimension. The bearded man in the background looks as if he is contemplating some awful deed, possibly involving the boy scouts. What is this psychopath doing in the pages of Ladybird? And has the Scout Master noticed, or is he simply trying to keep a brave face on for the sake of the boys?
Posted by Steerforth at 4:26 pm

Steady on. The scoutmaster - akela to give him his proper name - might well have been my Dad.

What worries me is the wall with the ever prevalent half toned paint-job. Was it still the case in the 70's that only half the required amount of paint could ever be guaranteed in advance of painting a wall? A hangover from rationing no doubt.

As I've said elsewhere, I grew up in a military school, and most interior decor was based around colours that had clearly been found on an unlocked RAF hanger in the Fens. V-bomber blue figured strongly.

Easy to forget just what a shock day-glo pait was back then..