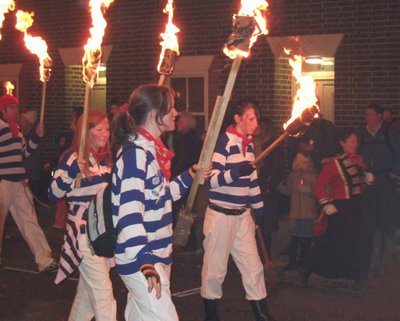 On Saturday thousands of people descended upon Lewes to watch the town's Bonfire Night procession. Shops closed early, windows were boarded up and several hundred police and emergency workers were drafted in from other parts of Sussex to cope with the crowds and prevent the town from being burnt to a cinder.

It is amazing that in this health and safety conscious age, people are permitted to parade through Lewes carrying flaming torches, wheeling barrows of burning tar and throwing fireworks, but this is a fiercely independent town that is proud of its traditions. During the English Civil War, Lewes was one of the few places in this area to support Parliament and this tradition of dissent continues to the present day.

Shortly before the US-led invasion of Iraq, the people of Lewes were some of the most vocal opponents of the war and held a public debate in the town hall to discuss the matter. A representative from the American Embassy attended the meeting and obviously thought that he was going to a quaint little town in the countryside occupied by old maids and retired colonels. He looked visibly shaken to be confronted by several hundred highly-educated, articulate and angry Lewesians and I think it's fair to say that the evening wasn't his finest hour
(to show its appreciation of American foreign policy, a giant effigy of George Bush holding a little Tony Blair in his hands was burned at one of the main bonfire sites on Saturday).

But Lewes isn't some hotbed of raving Socialism (most people vote Liberal or Green) and for all its apparent anti-Americanism, it is proud of its links with Tomas Paine. I think the key to Lewes is that it is a town in which tradition, continuity and living in harmony with the environment are valued more than in most places. This is because it was largely unaffected by the Industrial Revolution and has also, thanks to the geography of the local area, only suffered from limited development. There are a few chain stores and supermarkets, but they do not dominate the Lewes.

Most Lewesians are passionate about their town and want little more than to keep things as they are (although they would like a cinema!). This is an eccentric, quirky town with a rich heritage surrounded by beautiful countryside. Why would anyone want to change it?

I don't know if McDonald's have ever tried to open a branch in Lewes, but I don't imagine that they'd get very far. A McDonald's was opened in Glastonbury, in defiance of intense local opposition. It was burned to the ground within three days of opening and the culprits were never caught. Like Lewes, many of the inhabitants of Glastonbury are proud of their past and will do whatever is necessary to protect it against the forces of globalisation.

At the moment the world is experiencing rapid population growth and for the first time in history, city dwellers outnumber the rural population. However, although the future looked as if it was going to be an age of globalisation in which huge conurbations with multicultural populations were linked by motorways and cheap air travel, we are now beginning to realise that we are doomed if we pursue this course. If we are to survive global warming and the depletion of resources, our future probably lies in small, self-sustaining communities. Towns like Lewes may seem to be a relic of the past, but I am convinced that they are actually a model for the future.
Posted by Steerforth at 8:39 am