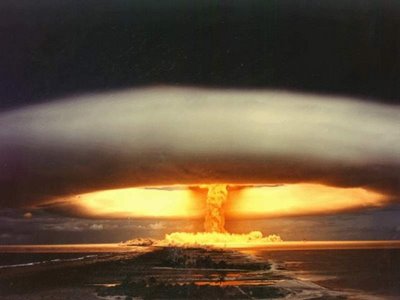 I have just finished Cormac McCarthy's 'The Road' and thought it was brilliant, but I would have probably still enjoyed it even if it was rubbish as I have a slight obsession with any fiction or drama that has a post-apocalyptic setting. I've no idea why. My wife thinks that I should talk to my GP about it.

For those of you who are also interested in writing which explores the human condition reduced to its barest essentials, here is a list of my top ten post-apocalyptic novels (in no particular order):

I realise that not every novel on the list is strictly post-apocalyptic, but they all deal with the theme of social collapse and its aftermath - something that is preoccupying a growing number of writers at the moment including Jim Crace (or should that be Crachay?), whose next novel 'The Pesthouse' is published in March.

With global warming, diminishing oil reseves and the threat of terrorism looming on the horizon, it is no surprise that there are so many speculative fiction titles being published. What is most alarming is the growing belief that we are living in the 'end times'. My second son is one-year-old today and I do not want him growing up in a world being torn apart by religious mania and corporate greed.

But before I succumb to a mood of pessimism, I must remember this (rough) quote from the controversial BBC film 'The War Game' - 'It is extremely likely that a nuclear war will have taken place by 1980'. It didn't happen. In the end common sense prevailed and we did the right thing.

Any recommendations for further reading would be very welcome.
Posted by Steerforth at 11:45 pm

And Day of the Triffids for me!

I went back and read it again recently, remembering it as a scifi potboiler about man-eating plants; only to discover it is a superbly bleak dystopic critique of social systems.

have a cheerful day!

That's twice in a week someone has mentioned Galapagos and I had never heard of it.They were expounding its virtues.Could be a sign? That or a giant tortoise is heading my way?Does it rate as fantasy do you think? I have to choose a fantasy read of my choice to take along to a reading group with the inmates of Dartmoor Prison next month, would this fit the bill? Sorry, questions, questions.

PS I'm delighted to have found your blog.

Hello Dovegreyreader. It's a long time since I read Galapagos, but I remember that it was very witty (that rare sub-genre: humorous post-apocalyptic fiction) and, underneath Vonnegut's knockabout humour, wise and poignant too. But the best thing I can do is quote the blurb:

'Long, long ago, as he researched the origin of the species, Charles Darwin had been inspired by the inhabitants of the Galapagos. Now, a million years on, the new inhabitants of the islands - the human survivors of the 'Nature Cruise of the Century' - have evolved into sleek, furry creatures with flippers, and small brains. All other forms of humankind have ceased to exist, finally made redundant by their own inventions.

All that survives of the Big-Brain culture is contained in Mandrax, a tiny electronic marvel which can recall any one of twenty thousand popular quotations from world literature, as well as translate among a thousand languages. Unfortunately, Mandrax doesn't understand Kanka-Bono, the language of the cannibals who have arrived to 'look after' the new humanity...'

Described by one reviewer as 'Kurt Vonnegut's funniest and maddest book for years' this may not be to everyone's taste, but I loved it.

Re: The Day of the Triffids, I have never read it because I also thought it was a sci-fi potboiler. It's now gone to the top of my list thanks to your recommendation Andrew.

John Wyndham was about as cult as we were legally allowed to get at a girl's grammar school in the 1960's and we read them all so I must read them as a grown up and see what I think.Did he fall out of favour in the PC dept or did I dream that?

I'm not sure if it's a PC problem. I think that's it's more to do with the fact that the sci-fi element puts off ordinary readers, but he's far too mainstream for sci-fi fans.

If I remember correctly, he prefered to call his writing 'speculative fiction' (a term that Margaret Atwood has applied to two of her novels).

Your wife is right