At the moment I'm reading...

The Road, by Cormac McCarthy. I've never entertained any desire to become a writer but if I did, this book would probably make me stick to the day job. McCarthy's writing is almost audaciously sparse, but achieves more in a few short sentences than two pages of Martin Amis.

McCarthy clearly knows that what you don't say is as important, if not more, as what you do and The Road's stark, primordial prose shows the writer at the height of his powers.

Try this for size:

The clocks stopped at 1:17. A long shear of light and then a series of low concussions. He got up and went to the window. What is it? she said. He didnt answer. He went into the bathroom and threw the lightswitch but the power was already gone. A dull rose glow in the windowglass. He dropped to one knee and raised the lever to stop the tub and then turned on both taps as far as they would go. She was standing in the doorway in her nightwear, clutching the jamb, cradling her belly in one hand. What is it? she said. What is happening?
I don't know.
Why are you taking a bath?
I'm not.

Once in those early years he'd wakened in a barren wood and lay listening to flocks of migratory birds overhead in the bitter dark. Their half muted cranklings miles above where they circled the earth as senselessly as insects trooping the rim of a bowl. He wished them godspeed till they were gone. He never heard them again. 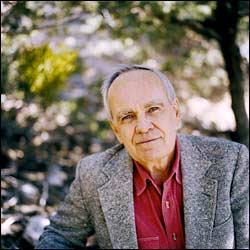 For a more articulate, intelligent and authorative assessment of Mr McCarthy's latest novel, click here to read what The Guardian had to say.
Posted by Steerforth at 4:51 pm