The Government don't like fat people, although they would never admit it. Instead they constantly bang on about having your five a day and getting regular exercise. I can't argue with that, but I wish that their motives were altruistic rather than fiscal.

The Goverment's ultimate nightmare are people like the Chawner family, for example. Philip Chawner and his wife Audrey both weigh 24st and neither of them have worked for 11 years due to obesity-related health problems. The Chawners receive £22,500 in benefits which is the equivalent of a take-home salary of £30,000. Not a fortune, but not bad either. 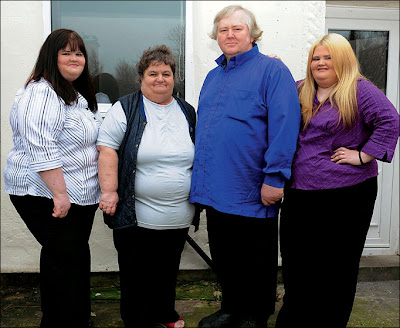 However Mr Chawner complains that £22,500 'barely covers the bills and puts food on the table. It's not our fault we can't work. We deserve more.'

Mrs Chawner agrees: 'All that healthy food, like fruit and veg, is too expensive. We're fat because it's in our genes. Our whole family is overweight.'

The press haven't been very kind to the poor old Chawners, who have only just recovered from the humiliation of their daughter Emma's appearance on the X Factor:

But beyond the comical aspects of this story, there is a sinister undertone. Most people would agree that it's a little galling that a family receive state benefits because they have rendered themselves unemployable through overeating. However, there are many reasons why people are unhealthy and it is dangerous to imply that individuals are always accountable for their own illnesses.

And if you are unlucky enough to visit hospital as a result of failing to heed the Government's advice, what nutritional food and beverages can you look forward to? 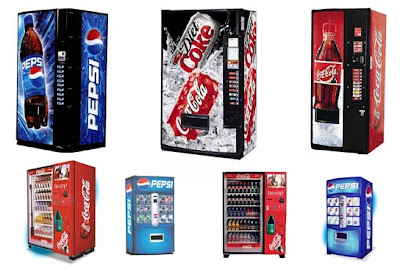 I once tried to find some fruit juice in a hospital and failed miserably. Maybe they don't really want us to be healthy. After all, if we all had a healthy BMI and only ate fresh, organic fruit and vegetables, what would our doctors and nurses do with themselves?
Posted by Steerforth at 3:59 pm

I was so tempted to comment on this story myself when it came out - but declined because I was worried it might mark me out as a smug Daily Mail reader ( I'm neither )... but actually it just made me angry, particularly the bit about 'being so tired after a day watching TV that I have to go to bed - we don't have time to work or diet'

I'm clinging on to my business with my fingertips and just getting myself geared up for a really grim 'end of year' conversation with the Inland Revenue - I'd love to spend all day with my feet up eating crap and moaning - but I'm too busy wondering where the money to pay the broadband bill will come from.

Rant over... ( actually - the brunette is training to be a hairdresser...in between pies, so that's something, I suppose )

I met a client recently who was easily the fattest person I have ever met. Naturally I looked up the copy of her GP notes which we had on file to see her weight. 220kg, which I mentally divided by 2.2 to get pounds ... 100lb? 7 stone? Hang on - oops, it's multiply by 2.2, isn't it? 35 stone. Her case was that she had fallen when getting into a taxi, as the driver had stopped partly on a ramp and the taxi had rolled back off the ramp as she was getting in. It was suggested to her that the car may have rocked when she got in. She denied this vehemently. I had to point out that a car rocks a bit when I get in, and she weighs three times what I do.

She could barely get through the doors to the courthouse, and once there, needed to get her mum to take her hand and do a 'one, two, three, PULL' to get her up out of the chair. When she took the lift, it literally sank a few inches when she stepped in (I anxiously eyed the 'Max Persons' notice), and was out of breath and distressed after walking all of twenty feet to the courtroom with the assistance of her wheeled walking frame.

I had a great deal of sympathy for her. Whatever caused her to get into that condition, self-inflicted or otherwise, she has an absolutely miserable existence which nobody would envy.

And to my great shame, I laughed at the vision of the lift sinking as she got in.

Thanks for the link. I'm not entirely convinced by their dietry claims, but I veer towards compassion rather than scorn.

I espie an escape route of of my jobless state.

What say you Steerforth? Shall we join the Chawner's ranks?

And I DO like Homes Under The Hammer and getting up at 9am each morning. So civilised!

I'm a bit of a fitness freak, but I tend to believe in live and let live. And it's a bit sad that some people welcome living on benefits, but if we are to have a compassionate system of supporting those in need then some folks are going to take advantage. My younger brother was made redundant recently after 20 years non-stop working and was reluctant to sign on - but he's paid for it in NI and taxes, and he needed the money to keep going while he looked for something else. Far worse, in my estimation, are bankers STILL getting bonuses after screwing the economy.