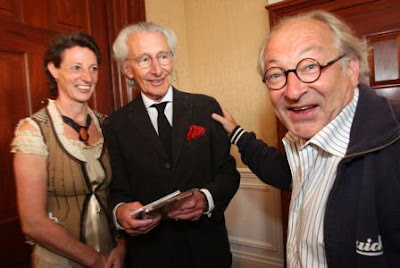 I've just finished reading The Assault by Harry Mulisch (the more dapper of the two gentlemen in the photo), an excellent novel which deserves a wider readership. Born in 1927, Mulisch has an interesting background. His father was an Austrian-born Nazi collaberator who spent three years in prison after the Second World War. Mulisch's mother, however, was Jewish.

Mulisch once joked that he was the Second World War and in many respects, The Assault is the work of a writer trying to reconcile himself with his mixed inheritance. Set between 1945 and 1981, this novel manages to say an awful lot in its 180-odd pages. I hope that this European classic doesn't disappear into the ether of obscure fiction in translation.

This is the third great novel I've read by a Dutch writer in as many months and yet Holland hasn't exactly set the literary world on fire. Why is this? There are many possible answers, but none of them are entirely satisfactory and if you apply the same criteria to other countries (weighting the results according to population and number of people speaking the relevant language) the results vary wildly.

Why has the Czech Republic produced so many world-class writers compared to Poland, Switzerland or Finland, for example? Why have France and Russia contributed more to world literature than Germany and Italy?

If you take the English-speaking world, although every relevant nation has produced a good crop of writers, for some reason Ireland and Canada are head and shoulders above everyone else. The number of great Irish writers is particularly impressive when you consider that Ireland's population is 2% of the USA total.

But I'm rambling. My point is this: is there a thriving literary tradition in Holland waiting for an enlightened Anglophone publisher to share it with an English-speaking audience, or are Harry Mulisch and W.F.Hermans big fish in a very small stream?

If Antal Szerb's wonderful Journey by Moonlight could be regarded as a classic of Hungarian literature for 60 years before anyone bothered to translate it, then that would suggest that we have a lot to look forward to.
Posted by Steerforth at 4:48 pm

There a couple of really good writers in the Netherlands, but most of the books produced here are just mediocre, I am afraid.
But have you tried The Hidden Force by Louis Couperus yet? It's a mesmerizing novel set in Indonesia, written about a century ago AND available in English. Highly recommended.

I think it is all about the value placed on culture within the country; the cultural inheritance and bohemian so to speak. Thus, Ireland who value the written word are great, Russia the same, and America - not so.

Can I point you in the direction of The Rider by Tim Krabbe. Not only the greatest cycling book ever written, but a masterpiece of writing, untangling the state of mind of a racer as his race unfolds, slipping from memories, to stream of consciousness, into second by second real-time. One of the few novels I've read more than three times.

This is what I like about blogging - casting an half-baked idea into the ether and receiving intelligent comment and recommendations.

I only know Tim Krabbe through the excellent film 'The Vanishing' (original version, of course) so I'll try The Rider.

I've never heard of Louis Couperus, so I shall definitely follow this up.

Tattyhouse - I'm not sure I'd agree about America. I think its literary culture is more vibrant than Britain's these days.

Hmm - I do know what you mean, even if you take TV as an example they have HB0, we have Channel 4 and reality shows.
But...I guess I am trying to say it is something about the cultural background of the country. I'm ashamed of my rubbish education in the company of Canadian, Czech's, French, Russians and so on. But a little proud of what I at least know in front of Israeli's and American. If you see where I'm coming from?

Mulisch's "Siegfried", about Hitler's love-child, is really good too (and nowhere near as lurid as that brief description would suggest).

Louis Couperus is great. And for your Hungarians, there's the sudden Sandor Marai revivial, and Frigyes Karinthy's amazing 'A Journey Around My Skull'.