I hate mobile phones. These days it's almost impossible read a book on a train without being interrupted by a hideous ringtone followed by someone shouting banal comments into their phone. Businessmen are the worst, particularly the ones who sound like second-rate actors in an afternoon TV soap:

'Well, that's no good. Tell APG they've gotta fast-track the order otherwise we lose the account...yeah, there are some operational issues...we need to be more robust about the schedule...'

Then you discover they're talking about incontinence pants.

As for texting, what's all the fuss about? It's the John Bull Printing Set of the 21st century. I really can't be bothered spending five minutes tapping away at keys to produce a message that could be spoken in five seconds. Life's too short. That's why I'd never contemplate Twittering.

I know that Twitter is becoming increasingly popular, but I don't get it. There's a limit to how much I want to know about someone's life and on Twitter, even Stephen Fry is boring.

But worst of all is the camera function. It is the Kodak Instamatic of the digital era, producing blurred, grainy images that look as if they've been copied from CCTV. I will never understand those people who record the most important events of their lives in glorious 0.3 megapixels resolution. I briefly used my phone's camera function until I discovered how crap it was.

Here are some of the pictures I took: 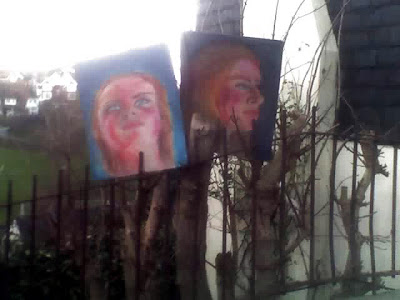 One evening I was walking to Lewes station when I saw these oil paintings, attached to some railings. I don't know why they were there. The next day they were gone. 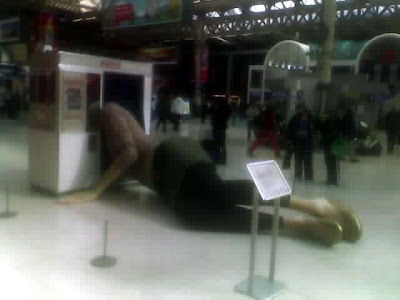 This giant human figure, lying on the floor of Victoria station, made the normally grim-faced commuters stop and smile. 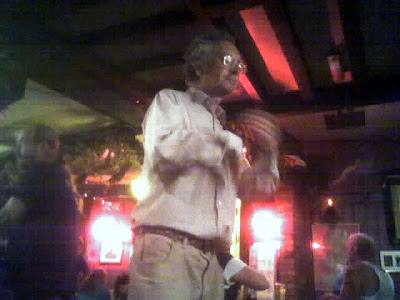 This is the famous Lewes Dancing Man, strutting his stuff to a Rolling Stones track. During the last few years he has acquired a minor cult status and there are now videos on YouTube. 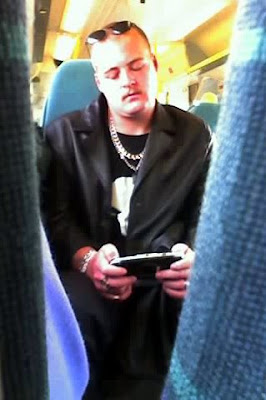 Überchav, sitting opposite me on a train. Luckily he was too engrossed in his game to spot me taking photos. The camera failed to capture his wispy little blonde moustache. 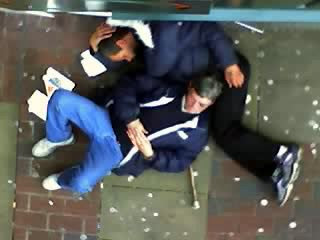 These two drunks staggered around a shopping arcade before collapsing on top of each other. What began as a comic scene ended up being sad and touching, as two men nestled-up together and fell into a deep sleep. 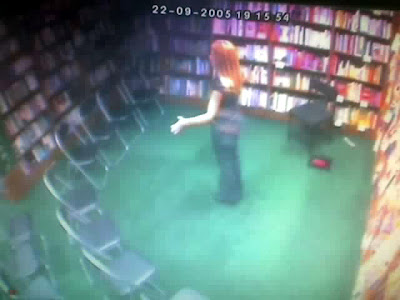 In my last shop I reluctantly agreed to let a local woman have an 'angel healing' evening. Before the event began she requested some time alone on the shop floor so that she could 'cleanse the space'. She was standing right in front of the CCTV camera and I'm afraid I gave into temptation.

As you can see, some of these images might have made good photos if they hadn't been taken on my crappy camera phone. I shall never use it again.
Posted by Steerforth at 12:30 am

I don't know, I quite like the no-fi look of them. With poor quality of reproduction the narrative of the picture is all that remains. The drunken coves asleep on each other would somehow be lessened by being in massive megapixel hi-def.

That's true. Some pictures look better when they're grainier. I really like Lomo photos (or Lomographs, as some like to call them).

However, I find mobile phone cameras are just too CCTV for my liking.

Just out of interest, what was she trying to cleanse the space *of*? Reality?

it gets worse...you can get software to make your pictures look like fake polaroids, CCTV, Lomographs or mobile phone shots.....

I want to be angel cleansed - it's probably more effective than shower gel.

I reckon angel cleansing is clicking your fingers three times in each corner, sprinkling some angel dust, then necking some Stella.
Not sure why - just think that it maybe happened often on my old old feminist workplace in Islington.

"Just out of interest, what was she trying to cleanse the space *of*?"

Negative energy, obviously, Tim. God, do I have to spell it out?

I was going to say what ev said about the low-res quality - like the slightly wrong colours in a Polaroid photo - and also think the drunks pic stands out in this regard.

I am afraid I do Twitter, and have even been known to send pathetic hopeful replies to celeb Twitterers. I find it fascinating, but it does create a false impression of closeness to others, particularly the famous ones - Fry, Ross and co - though in fairness, Jonathan Ross does do exchange a lot of personal messages with 'normal folk'. It is a bit unedifying though to read his and Jimmy Carr's tweets (know the lingo, chum) on their tennis matches together. I can't help wondering if Wossy and Jimmy will be joined by Tarby and Brucie for a game of doubles.

Graham Linehan is another good celeb Twitterer, and has an excellent blog full of amusing things.

I didn't realise how many people Twitter. I've unwittingly insulted some of my favourite bloggers. Sorry. I tend to get carried away.

Your reasons are mine.

I absolutely refuse to own a cell phone (as we call them here). No loud, banal, self-important conversations shared with strangers for me, no twittering, no idiot-level photography. Never, never, never!

If I hear a ringtone in the theatre, at the movies, in a nice restaurant, I complain immediately. I have no patience, no tolerance, for these ridiculous devices.

Pish-tosh, not that I count myself as a favoured blogger, but I am not insulted. I don't use Twitter or a cellphone in order to seek approval or kudos. I do what I do, and care not if I am looked upon with scorn and derision, yay even by those I like and respect.

Spleen must be vented I say, do so with impunity and make no apology, for this is your blog.