The spring of 2005 was one of the best and worst times of my life. On the one hand I was opening a new branch of Ottakar's - only two minutes' walk from the beach - and had recruited a wonderful team of staff. On the other, my father was slowly dying in hospital and several times a week, I had to drive 150 miles to visit him.

The combination of a dying parent and a heavy workload was a recipe for disaster and when, in the middle of it all, my wife discovered she was pregnant and started to feel really ill, I could have felt overwhelmed by events. However, it was work that saved me. By keeping busy and focusing on opening my new bookshop, I managed to stay sane.

It might seem counter-intuitive to repress grief, but it worked for me. In the short-term, at least.

There was something special about the shop in Worthing. There was an incredibly good morale and even though the age gap between the oldest and youngest member of staff was 48 years, it didn't stop us all having a good time at the pub. 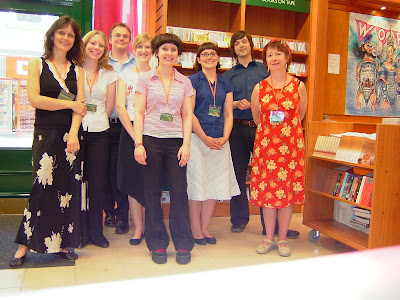 When we opened, we had less than a month to prepare for the launch of the sixth Harry Potter novel. We were busy enough just trying to get the shop running smoothly, but a new Harry Potter book was too good an opportunity to miss, as a successful launch would really put our shop on the map.

I say 'our shop' because I think everyone felt a sense of ownership. I certainly did everything I could to encourage that view and it paid dividends. In the four weeks between opening the shop and the publication of Harry Potter and the Half-Blood Prince, everyone worked at a feverish pace to prepare for the launch. As a result, the evening was a triumph.

If you wonder why I'm writing about something that happened four years ago, it's because I've just discovered how to convert the video I made of the launch into a format that can be uploaded to YouTube.

I hope this film captures something of the fun we had at Ottakar's. One of the booksellers used to be a drama teacher and was in his element as the master of ceremonies. I'm not a Harry Potter fan, but it would take a heart of stone not to enjoy an evening like this.

If you can't face the full five minutes, jump to 2'30". I came up with a fairly novel solution to the problem of suddenly producing the books at midnight:

Posted by Steerforth at 9:04 pm

Email ThisBlogThis!Share to TwitterShare to FacebookShare to Pinterest
Labels: ottakar's

That was very sweet. I was surprised to see Peter Gabriel rock up halfway through with a snake, though. And not sure about the kid whose owl-racing tactic was to beat the owl into the carpet...

That looked fun..and I'm offering my services if you ever fancy coming and opening up a shop here...hopefully am in middle age range. And have just worked out difference between Ottakers and Books Etc. It is family. Books Etc (at least in centre/city of London) only really employed fairly bright gradates for a short while, though sucked a few in. You very rarely found older people there - apart from a few experienced managers. Oh and a few thirty something gay men.

You've got it in a nutshell - family. Ottakar's really did feel like a big family and our relationship with each other was about more than making money.

I remember one incident when a woman who used to work for Ottakar's had a very serious stroke. Although she hadn't worked for the company for several years, James Heneage (the managing director) dropped everything and made a 400-mile round trip to visit her in hospital.

Ottakar's was a very old-fashioned company in some ways (in a good way), but very egalitarian and forward-thinking in others. It's a great pity that this wonderful working culture was stamped out by Waterstone's.

However, I like to think that Knights Templars or the Second Foundation, Ottakar's has just gone underground for a while!

That was very very sweet.
I used to love Ottakars in Stevenage when I lived there, it felt more like an indie bookshop than part of a big chain.

What a lovely and moving tribute to Ottaker's Steerforth.

Unbelieveable that such a venture should be trampled on by a far less imaginative and charismatic book chain. You all look so wonderful in the costumes too!

I fondly remember the branch in Banbury.

Thanks for sharing this Steerforth. I imagine it must be very bitter-sweet for you.