I've just read two novels in rapid succession (by my standards, if not Dovegreyreader's). The first was a proof copy that I found under a pile of boxes in my loft. The second was discovered at the Brighton branch of Waterstone's, which has the best fiction table I've ever seen, full of authors I've never heard of.

By sheer co-incidence, both novels are by Barcelonan authors who were born in 1965 and they are both published by Canongate.

The first novel is The Best Thing That Can Happen to a Croissant by Pablo Tusset. I'm normally quite a slow reader, averaging around 40 pages a day, however I found this novel so compelling that I managed the last 140 pages in under two hours. It's a weird book that starts like a mixture of Murakami and John Kennedy Toole and ends up like a more intelligent version of the Da Vinci Code (it was written before Dan Brown's book) with Robert Langdon played by Pete Doherty. But ultimately this is a book with a very strong voice of its own and I liked the author's dry, witty narrative style. 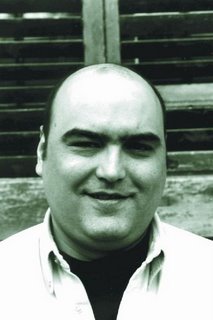 As you can see, the author is obviously keen on croissants and it's intriguing that his main character is an overweight man in his thirties called Pablo, who likes drinking, smoking dope and visiting prostitutes. Is this novel semi-autobiographical or is Pablo an alter-ego? The only biographical information I can find out about Tusset is that he abandoned a successful career as a literary critic to become a writer. He made the right decision and this, his first novel, received rave reviews when it was published in Spain. Here is an extract:

An inordinately loud clap of thunder roused me from my nap: brrrrrrrrrrrrm, just as I was dreaming about a bunch of treacherous creatures that possesed the singular ability to sink their little legs into the earth, take root there and survive indefinitely in vegeatble form. They even had a name: borzogs, they were called, a strange hybrid between nettle and elf. You could walk among them and not suspect a thing and then suddenly - bam! - they would come alive...and take hungry bites out of your legs.

I enjoyed Tusset's novel so much that I felt that anything similar would pale by comparison, so for my next book I chose something completely different: a story set in 1916 on a tiny sub-Antarctic island. I knew nothing about book or its author, but when I spotted it on a table in Waterstone's I was intrigued by the blurb. I had no idea that its author was born in the same year and lived in the same city as Tusset.

Cold Skin begins conventionally enough with a prose style that could have easily have been written 100 years ago. In 1916 a young man arrives by ship at a remote island in the South Atlantic to replace the incumbent weather inspector, but on reaching the small building that will be his home for a year the ship's crew find it abandoned, with half-broken furniture strewn across the floor. The man and the ship's captain cross the small, one-mile-long island to the only other building - a lighthouse - where they find a man hiding under the bedclothes. The captain questions the stranger, but is unable to get any sense out of him and tries, unsuccessfully, to persuade the young man to return to the ship.

One of the most powerful scenes in the book features the young man standing on the beach, watching the ship disappear beyond the horizon, knowing that his decision is irrevocable. He returns to his new home and prepares to spend his first night reading one of his vast collection of books, but as he settles done he hears a blood-curdling noise...


I started to speculate about the author's influences: definitely H.G.Wells, possibly Poe, M.R.James and Conrad. However my seven-year-old son was nearer the mark when he said that the plot sounded like a computer game he plays called Alien Shooter. He was right. I'd played the game too and although there were no aliens in Cold Skin, the basic premise was exactly the same. I wonder if the author - Albert Sanchez Pinol - is an Alien Shooter fan? 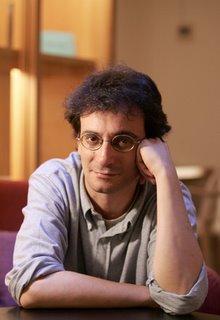 And to complete the coincidences, Cold Skin features creatures who are remarkably like Tusset's borzogs.
Posted by Steerforth at 5:37 am