Like many children born since the mid-80s, my sons lives have been captured on video camera and I have a collection of tapes that is so large, I would need to take a week's holiday to watch them. As much as I love my boys the tapes are, frankly, extremely boring. I can't bear to watch them and my oldest son starts yawning and fidgeting within five minutes. Only my wife seems immune from the tedium of rewatching the school nativity play or a five-minute sequence of my son eating a bowl of pasta.

Last year I decided to do something about it, took that week off work and edited 20 hours' worth of video tape down to a handful of short DVDs. As a result, we all enjoy reliving some of the happier moments from the past and my eldest son seems fascinated by them. However, as I watch him watching the video footage, I wonder what effect this will have on his memory.

In the natural order of things, we are supposed to forget the first five or six years of our lives, apart from a few flashes of memory. That sense of one's life as a narrative only develops in response to an accumulation of memories, which is why children possess the enviable ability to live in the present. However, many of today's children never go through the natural process of forgeting their past because they are continually reviewing it. I wonder what effect this on an individual's psyche?

I have tried Googling this question as I'm sure that there must have been some research done on the subject, but I haven't had any success.

If we go back further, beyond cine films, photographs and tape recordings, it was normal for people to forget most of their own history. Only the literate could keep a journal and portraits were limited to the priviliged few. Was this a bad thing? It is natural to want to preserve the past because it gives perspective and meaning to our lives, and the comforts of the past can counterbalance the uncertainties of the future, but would it be better if we just lived for the moment?

This theme has been explored by artists and many people will remember Michael Landy's 'Break Down' installation in which he occupied the ground floor of the former C&A in Oxford Street and systematically destroyed all of his 7000 possessions as a protest against the consumer society. Nothing was spared. By the end of the 14-day exhibition, Landy owned nothing except the boiler suit he stood in. 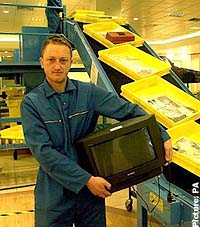 I'd be interested to know how he lives now. Did he pop down to Argos, pick up a catalogue and replenish his worldly goods or has he maintained his stance against materialism?

But that's a digession from a train of thought that began with home videos. If you're still reading, thank you for not drifting off. If you have any thoughts on this matter I'd be interested to hear them.
Posted by Steerforth at 7:11 pm

Well, Michael Landy's girlfriend is the artist Gillian Wearing. When last spotted by me, he was interviewed in whichever paper it was sitting comfortably in his kitchen, which he didn;t have to trash because it's hers, surrounded by household effects. I think his place is still more or or less barren (I think that's the word for this little stunt) but it's okay because he kips round hers.

I also heard he destroyed things like family artefacts which were in his safekeeping - including things that used to be his father's. I heard his mother was pretty upset about it.

I have to say, I thought it was a hollow and nastily arrogant enterprise. Interesting, n'est-ce pas? But then, I do believe in the importance of artefacts, and the principle of trusteeship, and the values of the family group. He had no right to destroy things that were important to other people.

In a wider sense, the issue of memories is interesting - my family for example has a lot of family stories, and these do build in "memory" and create mythologies about people - including one's own self, if one has heard the stories often enough. I think these videos (we have only about two, incidentally, alas - & we never watch them) may fill the same sort of psychological space as the family stories.

What a fascinating thought. I know someone who won't have his photo taken, not because he doesn't like the way he looks, but because he falls under someone else's control in the taking of it. Videos taken are selected and edited by the onlooker, from their perspective, with their agenda. To immerse yourself in the image of you as others saw you with no internal frame of reference to mitigate what is captured - would you see the character as someone separate from yourself or develop a character to fit what you see yourself to be? I wonder if studies on child film stars or people who have lost their memory and are confronted with images of themselves from before would shed some light on this? How would you know how a child might have been different if he/she hadn't been exposed to such representations of themselves? I'm uncomfortable with too much recording and not enough first-hand experiencing, like watching your life as a documentary on TV rather than being a player in it. Mind you, I think we'd all be better off living in small communities of a couple of hundred people where there were visible consequences for our actions and social anchors and less emphasis on identity definition by reference to conformity to manufactured idealised stereotypical images or by possession of things we know to be uncherished luxuries - different for everybody. One thing I do love about the opening up of information by the net, is that so many peple now, who not so very long ago would have viewed themselves as odd, freaky outsiders, with thoughts and perspectives that they couldn't share with those physically close to them, can now reach around the world and form communities, or belong because they can now feel like they do, with receptive others, instead of feeling wrong and miserable.
I'll have a search in the OU library and see if I can spot any studies on child identity development with regard to availability of recorded image of self etc!

I completely agree with both comments.

I had no idea that Landy destroyed some of his parents' family artefacts. There was nothing to stop him giving them back before the exhibition.

Family stories are such an important, but fragile, oral tradition. My father died last year and during the last 18 months I have become increasingly aware of how many questions I'll never have an answer to.

Misty - I also think we'd be better off in small communities and yes, it's been a great relief to discover that there are enough people out there who are asking the same questions.

I hope you're successful in finding out if there's been any research on this issue. I'd love to know what conclusions academics have reached.