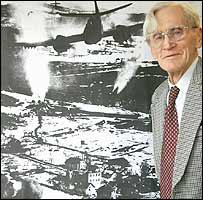 It seemed like a good idea at the time - instead of getting a local author to sign copies of his memoirs of being a pilot during World War Two, ask him to come and do a talk. However it now transpires that he is a right-wing, Christian fundamentalist who will probably use the evening as a platform for his views. Looking back on my meeting with him, he did say something along the lines of 'My friends didn't sacrifice their lives for all this filth and depravity.'

I should have taken the hint.

If he sticks to talking about firing rockets at Nazis then all well and good. What I don't want is a roomful of people who have turned up to listen to a war hero recount his exploits, only to be told that they live in the last days of Sodom.

(NB - Since writing the above, I have met Steve Stevens several times and he is never less than charming, so I should take hearsay with a pinch of salt)

Several years ago I booked an author who wrote books about self-defence and was notorious as the sort of man who could (and would) break someone's neck with his little finger. The shop filled up with shaven-headed, neckless men in their twenties and thirties who all seemed quite excited by the prospect of comparing notes about the best way to beat someone senseless.

The author arrived and after greeting the audience with a convivial 'Alright lads?' began his talk with the following sentence:

You could cut the atmosphere with a knife. The crowd were turning ugly and it was only when the author started listing some of the 'terrible' things he did before he converted to Buddhism that the mood improved. The talk finished with something along the lines of 'I don't fight any more, but I could still 'ave you if I wanted to.'
Posted by Steerforth at 5:59 am

Thought you might be interested in a post on Cubic-Parsec.blogspo.com on self-defining memories.
I was begining to wonder if my current feeling of disillusionment with the world was a nautral consequence of middle-age, or of my middle age, or a reflection of real changes in the world (in which we live in).
Your post has made me wonder if it's a consequence of WW2? Growing up post- 'You've never had it so good' we, I, had, without realising it, expected the state of shell-shocked relief, and remnants of respect for authority, social order, other people etc would develop into a futuristic utopia. But it was a blip. Like the rules were changed without any notice. And actually, Plus ca change and twas ever thus ...
Scavenging flocks of human seagulls, calls to legitimize discrimination by UK citizens on UK citizens, compensation claims for convicted criminals facing the consequences of their crimes, dropped corruption investigations...tightly edited it could be interpreted as a futuristic distopia in which valiant flying aces reveal 'enemy traits' and criminals use spirituality in a passive aggressive bid to exploit more filthy lucre. I wish I'd been born in 1930, or am I just having a bad day?

Middle-age angst or the zeitgeist? I think it's a combination of the two. It's glib to say that every generation goes through the same process - I really think that there was a golden age in which people who were born between 1935 and 1950 could grow up with the moral certainties of the old world but enjoy the freedoms of the new. I don't have any evidence to back it up other than anecdotal, but when my parents-in-law talk about the 1960s I can't help feeling envious.

I do feel as if the present bears an uncanny resemblance to the dystopian visions of the past. Remember how we all laughed at Clive James and his clips from the Japanese game show 'Endurance' - it could never happen here! And what about Orwell's vision of a future in which the proles were pacified by a national lottery and sentimental ballads created by machines?

I agree with your earlier point - the nearest we'll ever get to a futuristic utopia is living in traditional small communities. I saw an advert for a house recently. It looked ideal - part of a small, sustainable community with several acres of land for growing crops. The price? A mere £600,000.