I have read many biographies and unless the subject's life is particularly tragic, I am impressed by what a rich life they've led compared to my own humdrum existence. However, only one person has inspired me to the point where I would swap places with them: the lesbian speedboat champion Marion 'Joe' Carstairs.

During her youth Carstairs was famous as the fastest female speedboat racer in the world but by the time she died in 1993, at the age of 93, she was almost forgotten. Luckily, the Daily Telegraph newspaper decided to include a small obituary and asked one of its writers - Kate Summerscale - to prepare one. When Summerscale began her research she soon realised that she was dealing with a remarkable individual and had a book in the making.

Carstairs led an extraordinary life. After becoming the fastest woman on water she went on to buy an island in the Bahamas and ruled it as a benevolent despot, entertaining the great and the good of Hollywood and Europe whilst enjoying a string of lovers that included Marlene Dietrich.

One of the most appealling things about Carstairs was her penchant for practical jokes. Her sister was a professional golfer and Carstairs once travelled halfway across the world so that she could hide in a bush by the last hole and jump out shouting 'Boo!' just as her sister was taking the crucial final shot.

However, her finest joke was when she persuaded some islanders to shine up their faces, strip down to their shorts and drum menancingly outside her house as she entertained guests one evening. 'The Blacks are going to kill us all. Pansies first, women last' she warned her guests and watched with delight as they fled upstairs and cowered in the bedrooms. With a great theatrical flourish she marched outside with a shotgun and let off a few shots. The drumming subsided and Carstairs told her guests 'I think it's going to be alright now.'

As Kate Summerscale found out, Joe Carstairs' rich and varied life cannot be summed-up in a few paragraphs and I am not going to try and do that here, particularly when you can follow this link to an excellent article written by Summerscale herself. Even better, you could read Summerscale's excellent short biography of Carstairs, The Queen of Whale Cay, which is a fitting tribute to a genuine eccentric with an exhilarating zest for living. 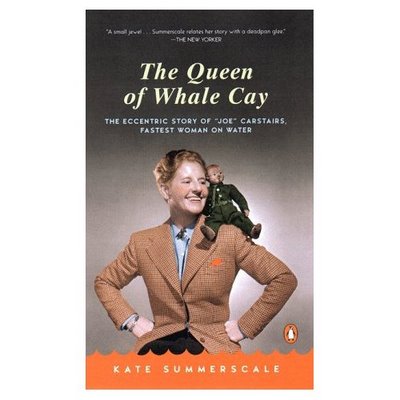 Posted by Steerforth at 7:51 pm