It was 40 years ago today, that Sergeant Pepper told the band to play... 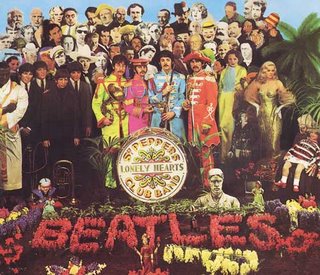 Actually it wasn't 40 years ago today since the Beatles released Sergeant Pepper's Lonely Hearts Club Band. The real date is June 1st, but I just couldn't wait. It is hard to believe that this album was released such a long time ago, particularly when it sounds so fresh and innovative compared to many of today's bands. But this post isn't a homage to Sergeant Pepper, as I have to confess that I think it doesn't deserve its status as the greatest rock album of all time.

Sergeant Pepper has some fantastic songs: A Day in the Life, She's Leaving Home, Lucy in the Sky with Diamonds and A Little Help From My Friends, but let's not forget Good Morning Good Morning, Lovely Rita or indeed the title track, which have B-side written all over them. I'd sooner have the White Album which, with the exception of the appalling Ob-La-Di, Ob-La-Da, is a masterpiece. And what about Revolver?

Come June, middle-aged music journalists will be in clover writing about Sergeant Pepper in 1967 and the Sex Pistols in 1977. (What happened in 1987? Oh yes, Rick Astley) Indeed, if I look into my crystal ball, the fog is lifting and I can see a bookshop table with a selection of retrospectives by some of our finest rock journalists (at this point I must confess to having an irrational prejudice against rock journalists). If I look further into the future I can see a stock room with a lot of books waiting to go back to the publisher.

So if Sergeant Pepper isn't the greatest album of all time, what is? I love the Beatles, but my choice would be Pet Sounds by the Beach Boys. Oddly enough, quite a lot of rock journalists agree with me.
Posted by Steerforth at 8:10 pm

I tend to veer between "Velvet Underground and Nico" and "Rock Bottom" by Robert Wyatt, the latter a very unique album, and a personal choice, whilst the former, undoubtedly the better album from '67. My only gripe with "Pet Sounds" is that it's made to tower above the rest of the Beach Boys canon, which is a shame, since good as it is, their music from about '65'-'74 was almost always sublime.

You're just going to thnk I'm stupid if I say OK Computer, aren't you.

Puff! Tough question, tough answer! I love the Beatles and adore Pepper's and, on the other hand, I love Pet Sounds to death!

I can't answer to that!! hehe

Happy New Year to you all.

Parameters are everything here, aren't they? What's great? What's an album? Classical included or not? Headache!

When I was younger - Led Zepp Four, or Back in Black.

When I started to listen - Never Mind the Bollocks, or New Gold Dream.

But now - it has to be What's Going On, by the incomparable Marvin Gaye. It defines what an album should be; it stands up as one integrated and balanced work of musical art. It's about love and environmental ethics. It's the Motown Marriage of Figaro.

I never got the Beach Boys.

*The Velvet Underground and Nico is a wonderful album, but I don't think I've ever listened to it in daylight (or fully compus mentis). As for Pet Sounds towering above the rest, you have a point, but now we know what the long-awaited 'Smile' album sounds like, I think 'Pet Sounds' still wins song for song)

*I love 'OK Computer', particularly 'Nice Dream' (although I've could have done without the Stephen Hawking solo)

*Goncalo, what about 'I Guess I Just Wasn't Made For These Times' or 'You Still Believe in Me'? I think if you counted the number of great songs in each album, the Beach Boys would win

*Andrew, I don't think classical and pop should ever be on the same list, otherwise you end up with polls that rank Robbie Williams higher than Mozart (I'm refering to Channel Four's Greatest Musicians of the last millenium). I love classical music but refrain from writing about it much as it seems to bore the arse of most people.

Motown is a fine choice. You are a discerning gentleman.

True, very true. Well, I think the only reason the Beatles would win, in case we'd compare them to the Beach Boys, would have to do with their importance and quantity of hits and their contribution for for music in just a 8 years period.

Do you count compilation albums?