The Idyllic World of Peter and Jane 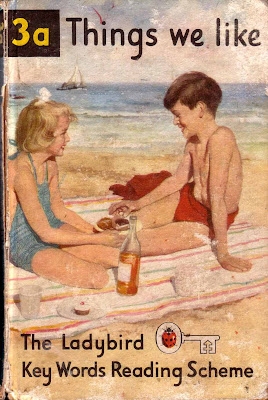 On Friday I found an old Ladybird Peter and Jane book. As soon as I opened it, I was taken back to a day when my parents solemnly announced that I was going to learn to read, as if it was an unpleasant medical procedure that had to be endured. I protested, but they wouldn't listen and silently, we got in my dad's clapped-out Ford Prefect and drove to "The Christian Bookshop" in Richmond.

We returned home with a Ladybird book and I began to read for the first time: "This is Peter. This is Jane. This is Peter and Jane. Peter likes Jane. Jane likes Peter..." It wasn't the most exciting narrative, but it did the job.

Even at the age of five, I could see that the late 1950s/early 60s illustrations belonged to another world. Listening to threads of my parents' conversations, it seemed to have once been a real world, but was destroyed when young men decided to grow their hair longer. I couldn't understand why it should be bad to have hair like Jesus, but I accepted that I wasn't being told everything.

If you're not familiar with the idyllic world of Peter and Jane, here is a typical story: 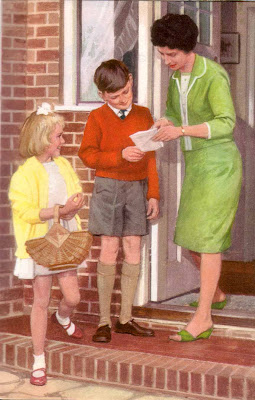 Peter and Jane's mummy is making an apple pie. She does not have any apples.

She asks Peter and Jane to buy some at the greengrocer. Peter has the money and Jane has a basket. 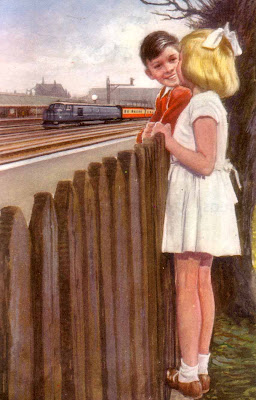 On the way to the shops, Peter says that they should walk into town and spend the money on sweets.

They can take the apples from Mrs Pippin's garden on the way home.

It is a long walk to the shops in town. 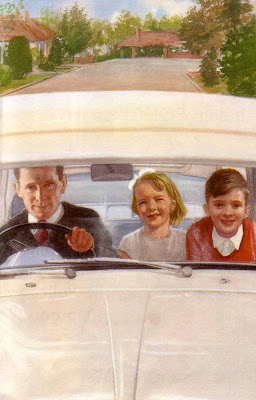 Luckily, a friendly stranger offers them a lift.

He lets Peter and Jane sit in the front. They like this. 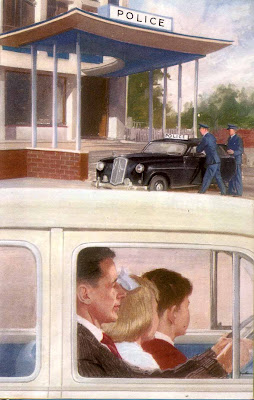 When the stranger sees a police car, he says that Peter and Jane must get out quickly.

The shops are not far now. 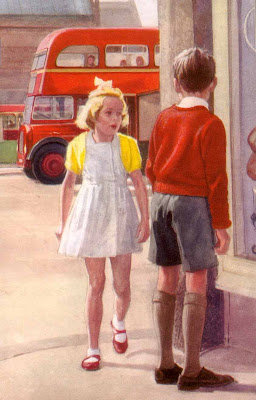 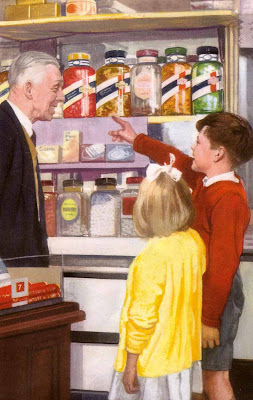 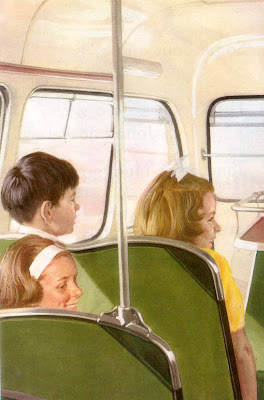 Peter has some money left, so they travel home by bus.

On the way home, they see the friendly stranger helping some other children. 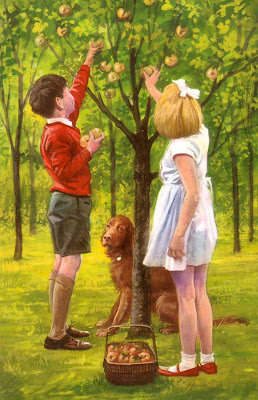 Before going home, Peter and Jane climb into Mrs Pippin's garden. There are lots of juicy red apples. 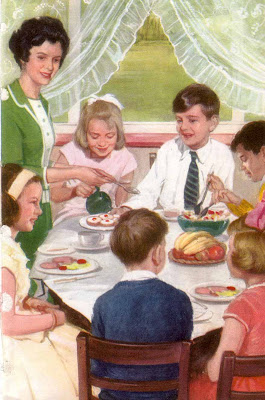 Jane's mummy has made a surprise tea, but Peter has eaten too many sweets. He has a tummy ache.

There is a knock at the door. It is Mrs Pippin.

As you can, it's a nice innocent story for young boys and girls who are learning to read. The illustrations are by John Berry, who also illustrated the Ladybird Book of the Recession and a very informative title about scout badges. I hope that these titles will reappear in print at some point in the future.
Posted by Steerforth at 9:18 am

I was a Janet and John reader, myself. That Peter, wasn't a boy who could be trusted.

I remember Janet and John, but I think I must have been one of the last schoolchildren to read them.

Love the illustrations, but the "friendly stranger" leaves me with an off feeling, dropping the kids off when he sees a police officer, and then driving by with more kids later on in the story. Perhaps I'm just more cynical than the average 1950s child or parent.

Kristin, you're quite right. That was the intention behind my pastiche. I wanted to contrast the friendly, innocent world that's portrayed in so many books for young children from that period with the darker aspects of childhood.

Most people I know had a rude awakening at some point in their childhood, whether it was from the proverbial friendly uncle or a stranger in the park. It was shocking how common these experiences were.

For me, books like Peter and Jane represent that idealised childhood that so few of us have actaully had.

...on the cover, Peter seems to be treating Jane to a rather fine Muscat.... the sly fox.

i so love your pastiche of the peter and jane books (loved The Ladybird Book of the Recession too - had missed it first time round, but I think I only discovered your blog a year and a bit ago).

I've been teaching Trefusis Minor to read using Peter and Jane - it works for him in a way that the Oxford Reading Tree (is that what it's called?)

Lovely stuff, but I can't help trying to work out who the stranger was really, and what the book said about the police...

The Oxford Reading Tree is a mere shadow of the glory that was Peter and Jane.

I'm so glad that a new generation of Trefusi will go forth with Peter and Jane buried in their subconscious!

This is Michael. Michael liked The Ladybird Key Words Reading Scheme. Michael is sharing it on his Facebook page. Then he will steal all your content and ride home with a stranger.

That is good. Peter likes Facebook. He talks to lots of friendly strangers...

Peter and Jane being naughty? And getting into cars with sinister strangers? I don't remember that one!

They were always goody two shoes as far as I recall, though their edgier teenage cousins went on island and castle adventures in the 11's and 12s, which I loved.

What a great suburban lifestyle Peter and Jane had. And wonderful red stair carpet. Only one set of clothes each though. Ah well, I suppose their parents had to economise somewhere. Good to see some real grown ups though. Whatever happened to real grown ups? Many parents are at least as childish as their children now, presumably in the forlorn hope that emotional immaturity will keep them young.

Your Ladybird book on work is one of my favourite Steerforth classic postings! Sublime. Not least being about to be made redundant at the time.

When my daughter was born - that would be 30 years ago BTW - I got my hands on a Ladybird catalogue fully intending to buy her the lot until I saw just how many titles they produced. I was astounded. She did get quite a few though. I've always had a lot of time for Ladybird Books. Have you seen the site Ladybird Prints by the way?

Yes I have seen the site, but in a moment of madness I went a step further than buying a print and now own an original Peter and Jane illustration. I think I'll end up having to sell it.

Gaaah. That was thoroughly creepy and I may have nightmares about it tonight.

I LOVE Peter and Jane books - I have some old ones that Six learned to read by (as did I) although I do distinctly remember feeling resentful towards the pair of them for living lives that did not resemble mine in any way, shape or form at the time..

I loved Peter and Jane and learned to read with their books in the early Seventies. I love the illustrations and have started collecting again. I have a particularly fine one of their educational series about jobs people do. It's for the police and makes Dixon of Dock Green look positively cutting edge.