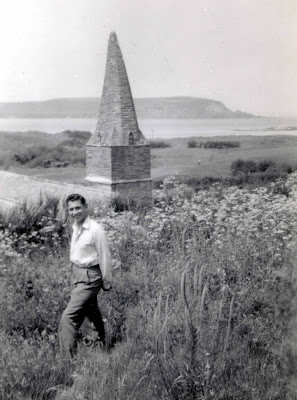 If you're new to this blog, then please click here, followed by here, here, or even here, to find out who Derek is and why he has touched the hearts of hundreds, possibly thousands of people.

Today's extracts are from the late 1980s, when Derek's hypochondria has reached the point where he is contemplating early retirement on grounds of ill health. On every other page, Derek records that he has a cold or headache. Unfortunately, Brenda and the children don't seem to have fared much better, with of constant succession of minor ailements.

It is hardly suprising that Derek and Brenda suffered from so many largely psychosomatic illnesss. Aside from the stresses of raising a mentally handicapped child, they spent many years living with Brenda's mother, who comes across as a rather poisonous individual. Derek was clearly a frustrated man who dreamed of being a writer, but was very candid about his own mediocrity. Derek's passions were dampened down by his sense of duty, but resurfaced as minor ailments.

We begin with Derek suffering from existential angst:

Life is very ordinary at the moment. We sleep; we rise up; we work; we return again; we sit and fall asleep in front of the television; and the evenings draw in earlier by the night; and we retire to bed again.

Today I ate my tea - salad surrounding chicken nibbles, followed by banana and chocolate custard. As I did so, I watched an early Tarzan film on television: "Tarzan Triumps," a weird sort of film made to inspire patriotism in young Americans during the war years. Weismuller had great lines: "Where Boy? Boy gone? Now Tarzan make war!"

If I had my way, I would always take The Times or the Daily Telegraph. But Brenda finds them rather too heavy for her taste, hence most times I get the Daily Mail. This, of course, has some excellent articles in it, particularly those by Paul Johnson and Lynda Lee-Potter. However, some of its items are rather too frenetic, others are untrustworthy, and its blue politics too overt for my taste.

While preparing Richard's bath this morning, I was pondering on the division of the earth in the days of Shem and Peleg. It seemed to me that if one were to prepare a jigsaw of those parts of the earth that fitted together and stuck them so, the space must be left where the city of Enoch used to be. I ran downstairs to put this theory to Brenda. She assessed its faults as a workable model in about three minutes. She pointed out that some parts of the earth had glided over others; others had been thrust up as mountain chains; yet others were uplifted seabed. Ergo, fitting the parts would not be possible, only in a limited way because of techtonic plate movement. So, back to my ponderings I go. Facts are always getting in the way!

Well, the only fool about today was me. I was full of hyperenergy, kept making stupid remarks and in many respects must have appeared most childish to the members of the staff at the office. Still, I have enjoyed myself; and Shirley Jones remarked in the moment of my attempted repentance that they much preferred me foolish, since it livened up the place a bit. But still, what sort of Priesthood holder is it that spends time making a fool of himself when the solemnities of eternity ought to be resting on his mind?

Amanda Wilmington gave an excellent talk. Her clarity of voice is a delight to listen to; and her material is quite novel in a young lady of her age. She is due to have an operation on her jaw soon since it is rather too large for her face. Once that is done, she will be an attractive young lady with much to give.

I walked down to Nanna's flat to deliver some colostomy bags to her. I had picked these up earlier from the hospital, where I had asked for some "sunshine" bags, Nanna's pet term for them. They boggled somewhat, so I explained myself; and when I left, bags in hand, they were of the opinion that sunshine bags was a more descriptive term, particularly since the bags are bright yellow in colour! When I got home again, the Spirit came upon me most powerfully.

I took my route up the High Street, and at its end there was a group of lads and girls in black leather jackets and leggings, several of them drunk, singing and carousing through the crowds and shouting vile abuse at car drivers; for the group took no care of the pedestrian crossing lights. I prayed to the Lord that the day might rapidly come when such scenes would pass away from the earth, and it would be people with men and women of sobriety and peace.

I thought I would be free of needing to follow them once we reached the Centre, but they took their own way down the same road. When I got inside my gate and turned to latch it, one of them turned and bawled "What are you looking at, you f...... s......?" Not the sort of remark to stay and answer. And that is the great question: why do the sons of Satan always have a strong build? One never suffers abuse nor evil from little men whom one could flatten. Curious...

Recently my family has made me increasingly aware of the irritation caused by my tapping away at the typewriter keys when I am at home. Perhaps it is time for me to return to writing out my entries? That would be much harder, and somewhat of an intellectual grindstone since my thoughts seem to flow more freely through a keyboard...

A year or so later, Derek seems to have bowed to popular demand and gave up typing his diaries. Sadly, the last few journals - handwritten in exercise books - were thrown away by someone in the warehouse where I work, but I do remember reading about a trip to the Holy Land, which must have been a major event in Derek's life (particularly as he never seemed to travel abroad).

In spite of his relatively good health, Derek was able to retire early on grounds of ill health, thanks to a sympathetic doctor. A diary from 1989 shows that Derek appears to have enjoyed life after work, joining a creative writing course at the local adult education college.

After that, Derek's life is a mystery. I would love to know how the story ended.
Posted by Steerforth at 8:17 pm

From the photograph, it seems that Derek and I have trodden the same path. See my post, Description Medication

So that's where he was. Thanks Martin - another piece of the Derek jigsaw fits into place.

Increasing shades of Orton and Kenneth Williams now as time moves on.

He was absolutely right about the burly sons of Satan.

One of the many interesting things about these diaries is the disconnect between the text and the photos. Reading his entries you'd assume Derek to be a rather unassuming, querulous individual, but he's in fact quite dashing.

NOOOOOO! It can't end there - there MUST be more Derek, there MUST!

Don't worry - there's a lot more Derek to come. I've gone for the Tarrantino Pulp Fiction narrative structure rather than a chronological one ;)

Poor poor Derek. He seems to have chafed under the restrictions of his job -- his religion -- his repressed (and depressed) wife Brenda. What a sad waste of his dreams and talents!

I guess you would have to say Derek's life is a cautionary tale, encouraging us to stand up for ourselves and make better use of our talents and time whilst we are here on earth.

May he have found the peace and fulfillment in the heavenly kingdrom that he failed to find here.

Wow, so claustrophobic. I'm off to the wide open spaces....

Oh, on a side note, I had a sighting of Brenda The Bearded Lady of Guildford today, having a bit of a sit down on a chair inside the entrance to Marks and Spencers. She's looking well, was dressed in black and I think sporting a short haircut (although it may have been tied back) and, as always, her magnificent beard. I wish I had the courage to just go and say hello...

She seems to be quite indulgent towards her fans, so I hope you'll pluck up the courage.

P.S. - Mrs Jones - if you interview the Bearded Lady, I'll have to reciprocate with the Dancing Man ;)

That is an inspired observation by Modern Life is Rubbish re the echoes of both Kenneth Williams and Joe Orton in the writing.

I find it unbearably sad that Derek seemingly bowed to pressure to forsake the only outlet that was probably keeping him sane - his writing, and am sure he suffered greatly as a result. You would have thought at the very least he could have found a quiet corner in one of the places he officiated, if not at home.

Most definitely ill health is often caused by repressed emotions, though he was undoubtedly under a great deal of stress as well from all his family demands - except for that one demand he really craved - the one his wife decided she could no longer provide for whatever reason, though doubtless the mother-in-law's presence acted as a pretty powerful contraceptive.