Back in November I wrote this post about the strange world of "Candy and Andy" - a proposed television series by Thunderbirds creator Gerry Anderson.

I thought I had seen the worst of Candy and Andy, but a reader in Indiana has just emailed this disturbing image of a day in the park: 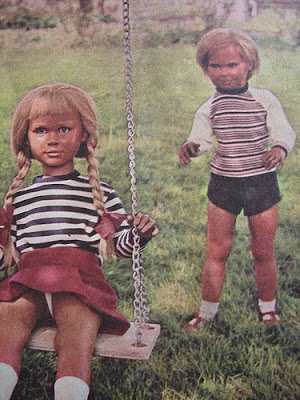 Greg writes: "Possibly the most disturbing photo of all. Why are Andy's shorts so tight? What's with Candy's upskirt? And why is Andy looking at her that way?"

It's a great pity that Gerry Anderson didn't even make a pilot episode, but this clip from another Anderson puppets and people series called "The Investigator" is a tantalising glimpse of the madness that could have been "Candy and Andy - Series One".

Posted by Steerforth at 1:37 pm

Email ThisBlogThis!Share to TwitterShare to FacebookShare to Pinterest
Labels: candy and andy, gerry anderson, the investigator

Poor Andy. His interest in girls started at a very young age. I think he was a big influence on my sexual development. I think he's enjoying pushing Candy on the swing! I was never sure if she was his friend or his sister. Sometimes I was a little jealous believing their plasticity was due to a bygone eugenics experiment! He doesn't look the type to leave your children with!

Does Candy have a small piercing in her nose when she's about to kill Mr Bearanda?

Unfortunately it's a speck of dust on the scanner...

Yes it looks very very disturbing indeed. Why is Andy looking that way.. It looks as though is child molester in the background..

I remember these, but when I discussed them with my brother, he didn't, even when i found a photo of them in a magazine. In the above photo, Andy looks like a cross between Chucky and Scorpio from Dirty Harry!