A few weeks ago I discovered that we were going to start receiving books from Ireland and sure enough, the number of titles about obscure saints has suddenly shot up. This is my favourite: 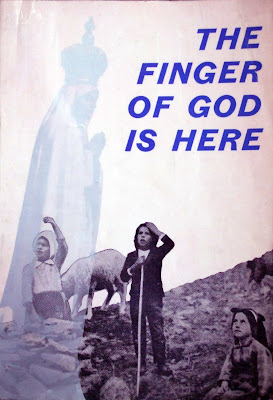 I've heard of the Hand of God, but what is this all about? Is it a more casual form of divine intervention, for less important cases? Either way, it's a wonderful jacket.

The addition of Ireland to our supply chain is a real bonus, as the quality of the books is generally high, but it does make it harder to trace the origin of some of the obscure items that are hidden between the pages. For example, is this badly-composed photo from Britain or Ireland? 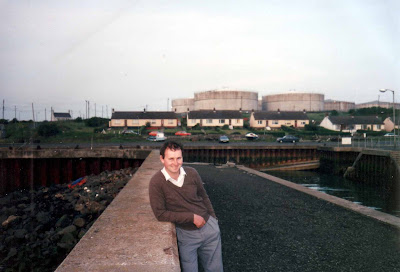 It definitely isn't Sussex, but I'm pretty sure this is: 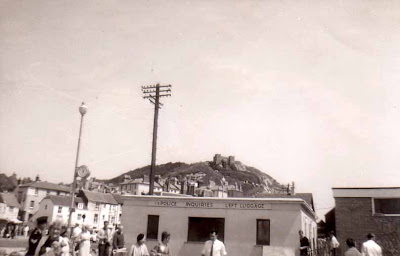 I'm almost certain that it's Hastings. I found it in an album of photos that were so dull, even the owner gave up after seven pages. This picture is one of a pair and shows how important the resort was as a tourist destination, with bustling coach parks and crowds of tourists. In this picture you can see a building with a sign saying "POLICE. INQUIRIES. LEFT LUGGAGE", so it was clearly a busy place.

Here is another, more exotic form of travel: 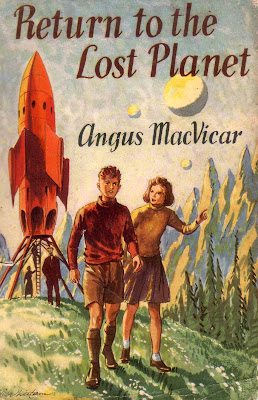 This is a quintessentially 1950s Dan Dare Britain, still hanging on to its status as an imperial, maritime power; now conquering the stars with an army of grammar school children, probably called Colin and Jean.

Perhaps "Return to the Lost Planet" was bought with this: 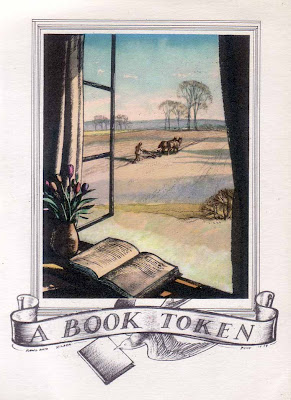 This Book Token card was designed by Rowland Hilder and comes with its own detachable bookplate, which has a smaller version of the cover. I know that these sorts of pastoral images can seem a bit naff, but there's something very appealing about this one.

Here is a frontispiece from the Edwardian era: 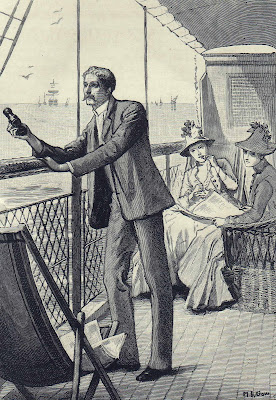 In an age when a lot of us are getting our knickers in a twist about the burqa, it's easy to forget that we also used to have some fairly conservative ideas about dress. A century ago, the removal of one's hat could cause both outrage and, sometimes, a sexual frisson. The lady on the left looks as if it's all too much for her.

Things were quite different 30 years later, on the eve of the Second World War: 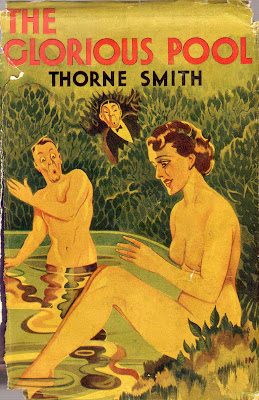 Admitedly, this is unusually saucy for its time, but the mere fact that it was published shows how much the social mores had changed.

Fast-forward another 30 years and you find covers like this: 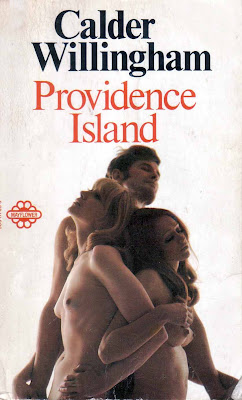 I can't begin to imagine what it must have been like for someone who grew up in the age of hats and smelling salts to see covers like this. Sodom and Gomorah! I suppose it didn't happen overnight, but I'm sure that my Great Aunt Nancy must have thought that the world was coming to an end.

But while some people were losing their inhibitions, others were improving their diction: 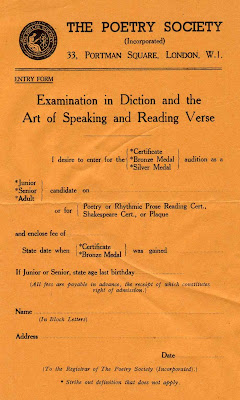 I wonder what the criteria were. Presumably, in addition to not speaking as if you had a bun in your mouth, anything too "common" or regional was out. But were points added or taken away for speaking like Noel Coward? I'd love to know.

Finally, something I found two hours ago: 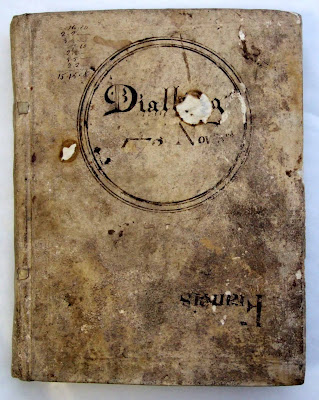 It is an 18th century exercise book, with beautifully-written notes and drawings on trigonometry by a gentleman called Francis Bird. 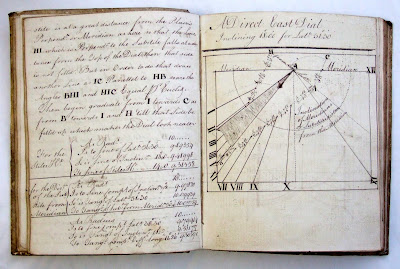 Holding a book that is over two centuries old is exciting enough, but there is something really special about something unique like this. This is a book that, several years ago, would have ended up on a landfill site, so I'm really glad to have the opportunity to save it.

Now all I have to do is find someone who wants to buy it. I wonder how many 18th century trigonometry fans are out there?
Posted by Steerforth at 12:36 pm

I love your posts, and the introduction to wonderful old books of which I've never heard before. These old books are fascinating.

Regarding your remark about everyone getting his/her knickers in a twist about burqas -- I grew up in a Catholic family. In the bad old days, nuns were covered head-to-toe, complete with wimples which revealed only a portion of their faces. None of us were traumatized as chldren, or particularly threatened by their attire (except if we'd been misbehaving!).

In a way, burqas are the same sort of thing -- different faith, different time, different place -- but same ulta-conservative covering of the female form.

So why does/did one pass without comment, and the other is seen as a threat?
Canadian Chickadee

Well, I must admit that I do find the burqa offensive. I have no problem with the hijab, which is similar to a nun's outfit, but making women walk around like post boxes is beyond the pale.

I saw a Muslim couple in Crawley once - the woman had a full burqa whilst her husband, who walked in front of her, was wearing an Adidas t-shirt, Nike trainers and a pair of Levis. That seemed like double standards.

If a woman has to wear traditional clothes, then so should the husband. Couldn't he have had one of those pyjama outfits with the Thunderbirds hat (I do apologise for my ignorance about the correct terminology).

I am very glad that we're not banning the burqa, because it would probably be for racist/Islamophobic reasons rather than a desire to protect women's rights. Also, I do accept that a few women actually like the privacy of wearing a burqa.

yep, Hastings, I stood at that spot an hour ago with the dogs then climbed the steps up that hill to come home - the site is now in the process of becoming the Jerwood Gallery - which will hopefully help Hastings to return to former glories, lovely picture - cheers!

You're right, Steerforth. I have to admit that in spite of my best intentions, I find it very unsettling to come across a woman dressed as a post box, as you so aptly put it, whilst doing my weekly shop. As a friend said, "Who knows who or what is actually under there? A baby? A bomb? Or just an unfortunate woman."

A friend who used to travel to the Middle East frequently for her husband's job, was bemused by the Arab women who got on the plane in London or Paris, dressed in extremely expensive and fashionable designer clothes, and then disappeared into the loo about half an hour before landing, to change into a burqa.

And on the subject of double standards, Moslem children, even girls, are allowed to wear Western dress until around the age of 11 or 12, when they are stuffed into sacks, and told to forget about freedom of movement, or joining in their friends games, or any of the other "normal" things girls that age do. Does seem grossly unfair. At least to me!
Canadian Chickadee

If not too tedious to introduce, here's Ayaan Hirsi Ali on the issue of covered women: "The veil also manifests division of the sexes. Women must veil; men do not. Underlying this simple dogma is a sexual morality that holds women responsible for the sexual conduct of men. Men may become aroused to sinful thoughts at the sight of a woman ...The most wicked aspect of this "morality" is the complete lack of male responsibility for male conduct. And this sexual morality clashes deeply with that of the West, which emphasizes female eroticism in fashion, music, films, advertising. Feminists may argue the merits of all this, but one distinction remains important. In the West, there exists an assumption that men are capable of sexual restraint. It is this presumption that makes it possible for us women to freely take part in public life and make our own private choices. The victim of rape in a miniskirt did not ask for it, and the husband who rapes his wife is guilty of a felony." Personally, I don't see a woman's hair as being necessarily very enticing, no more so than her eyes or her mouth. I suppose nuns were similarly committed to neutralising their sexual identity, but it seems this might also have involved a good dose of repression (if recent scandals regarding catholic priests are any indicator of what might and might not be healthy.)
And btw - moving from the beauty of women to the beauty of objects - the 18th century geometry book looks absolutely exquisite. What pleasure you must derive when you come across something so lovely and unique, as well as from knowing you have saved it! Would such a book be very expensive? I have no idea. This is exactly the sort of gift I might buy for someone's birthday, when really I wanted it for myself. ;-)

I saw a woman in full muslim regalia driving the car in front of me on a ring road the other day.

She was completely unable to do shoulder checks to see if anything might be overtaking or check before overtaking herself. Nor could she look from side to side to check for traffic at junctions before turning.

I am absolutely for the banning of this health hazardous impractical and anti-social garb as much as those with hoodies or helmets on are unwelcome in banks etc. Or at the very least a driving ban meted out for any woman observed trying to drive whilst wearing 'the letterbox'

Then again I believe everyone should dress and integrate according to the country in which they choose to live, including ex-pat Brits in France or Spain and it is very rude and arrogant not to.

Love the cover of 'The Glorious Pool' by the way.

I would love a handwritten 18th-century trigonometry book! Wow!