The News Before it Happens..

I'm not a betting man, but I think that we can be fairly certain that the following images will appear in the press this summer:

1. A woman sitting on someone's shoulder at a rock festival: 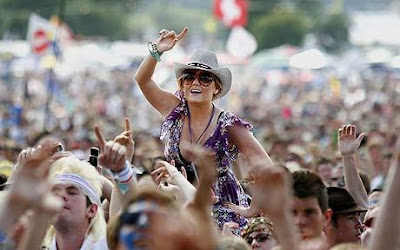 The woman will invariably be someone who looks as if they normally work in HR. Indeed, most of the people who appear in these crowd scenes look like nice, middle class people who went to good schools and don't have a criminal record. Whatever happened to Hells Angels, nudity and hard drugs?

2. Some girls in bikinis on Brighton or Bournemouth beach: 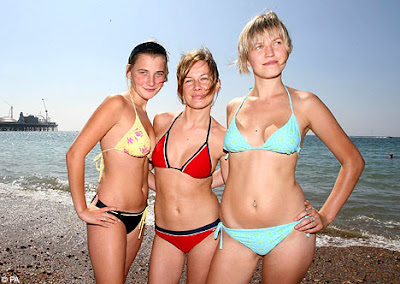 Apparently yesterday was hotter than somewhere a lot further south that's normally much hotter than here. Or something like that. Anyway, it's a good excuse for newspapers to have a large photo of girls in bikinis.

3. A group of young women receiving their A Level results: 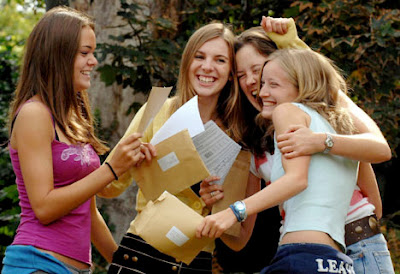 Apparently, all ugly people leave school at 16, leaving the higher education system exclusively for the use of beautiful people with good hair. Every year, the papers publish photos of pretty teenage girls opening their "A" level results. 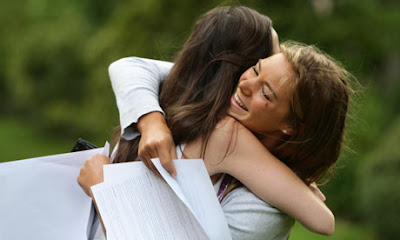 Sometimes the girls are so excited by the results, they decide to celebrate with some hot lesbian sex (or is it just me who sees this particular subtext?)

Anyway, it's all very annoying. I want to see more people with acne and greasy hair. Also, I'd like to see someone really disappointed with their results. But no-one ever is, which neatly leads into the next news story:

4. Some students being shown to be demonstrably cleverer than ever before: 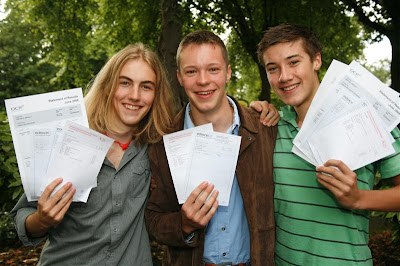 Look at these lads. They've all got straight As. My spindly, malnourished generation were happy if we got a C and scraped through to East Anglia or Kent. And when we got there we never said we went to university, because that would have been lording it above the people in polytechnics and colleges. Now, everyone's much cleverer and they all go to uni.

5. A photo of students in gowns accompanying an alarmist article about the lack of university places: 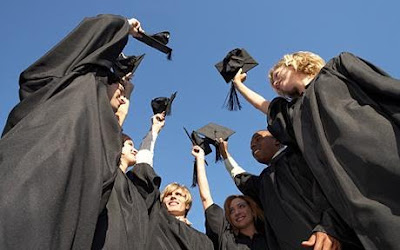 Apparently the Government didn't know that we were all becoming more intelligent and failed to expand the higher education system to accommodate the extra A grade students. The Daily Mail, which one week earlier implied that these exam results weren't worth the paper they're printed on, will now happily take the Government to task for failing our young. 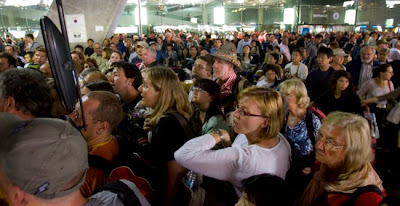 It used to be French air traffic control, but now we have terrorism, volcanic dust and bankrupt tour operators to contend with. Wouldn't it be easier to stay at home?

These tired clichés are wheeled out every year, accompanied by articles that probably come from a template somewhere. Unless something interesting happens, I shall be avoiding the news until September.
Posted by Steerforth at 9:50 am

My daughter is doing a degree course with the Open University and more power to her. I’m dead proud of her. That said when I hear what’s required of her (i.e. how little she can get away with) I’m actually quite appalled. I write more involved blogs than the essays she has to write. And, although this has always been true I suppose, once she’s passed a course she can merrily forget everything she’s just learned. I’m saddened to find that when I question her about what she’s doing she can often barely hold her own in a discussion and yet she’s the one who’s going to end up with a degree in a couple of years and all I’ve got are a few O-Levels.

Knowledge is one thing. She’s learned enough to be able to pass exams but I’m not sure how much she understands what she’s learned and by ‘understanding’ I mean ‘is capable of making practical application of that knowledge’. It’s a worry. I’m my day having a degree meant something. I had a friend though who even back then realised that all a degree was good for was showing a potential employer that you had a capacity to learn. He said he’d hardly used any of what he learned in his degree in a work situation.

What about the photos of gridlock on the motorway as travellers try to get out of town for a long holiday weekend?

Or is that peculiar to this side of the Atlantic.

Thomas, you're absolutely right. I'd forgotten about the public holiday/traffic jam reports.

Jim, I can't help wondering if higher education was just expanded to massage the unemployment figures. And why does everyone have to go to "uni"?

There's too much emphasis on academic education. There are different types of intelligence and rather than having more pseudo-academic degrees in subjects like Travel and Tourism, we should be encouraging a greater respect for apprenticeships and vocational training.

Go backwards or forwards in time six months and it's the same in Australian newspapers.

(Verification word: 'bostomic'--that SHOULD be a word!)

As soon as I read the first line I knew I didn't have to scroll down far to find an image of comely lovelies waving their exam certificates. My particular favourite ( in a totally ironic way, honest guv ) is the one from a few years ago when identical triplets gained 'magnificent' A level results, possibly as a result of their tight T shirts and winning smiles. Lets not forget the classic stock photo of a packed Brighton Beach taken from outside The Grand Hotel - with the pier in soft focus in the background. It's the same one every year, those happy toddlers in sun hats probably have children of their own by now. Phew... what a scorcher!

Ah but you don't see how scuzzy these people's rooms are or the after effects of the previous night ending up in the local A&E. Most beautiful people simply can't wait to kill themselves with scirrosis of the liver or look 60 by the age of 40 (if they get that far).

Try being a student housing officer and I guarantee it will cheer you up!;-)