The Age of Derek 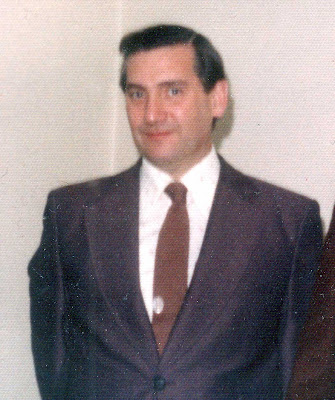 Here are the latest offerings from the Book of Derek (if you're new to this blog and the name of Derek (Peace be upon Him) means nothing to you, then click here):

"And then in the bus station, Jacki Richards jumped out on me. It was more than I was willing to endure. With some force I told her to stop haunting me, that she was making a laughing stock of herself and that I was a married man who was twice her age and more and not prepared in any way to compromise his marriage even by a shadow of a relationship with another woman. She turned pale and said that it was my friendship she wanted.

We then got on the bus and I invited her to sit next to me. She started to make banal conversation. I told her that such conversation was an anathema to me. I then got out my book and started reading. She fidgeted."


"I made a terrible joke in one of the marriages I performed today. The surname of one bride was 'Winter'. At the end of the ceremony I shook her by the hand and said 'Fear not, Winter is past.' There was silence; and then a great roar of laughter from the guests."


"The town has been invaded by thousands of scooter bikers, many of them as shorn and decorated as Lamanites. There have been a few dozen arrests already. As I went to catch the bus this morning, one was wandering about wrapped in a purple blanket, his blond (sic) moll in tow. They were seeking breakfast without too much success at that hour of the morning. While I was standing in the bus station they dragged themselves by. After a while they returned. The lad was shouting at his moll 'How stupid! Fancy thinking we'd find them in a f*****g coach station!' He was not a man I would introduce to my daughters."


"A new temporary lady started with us today. She drove me home in her little mini and bombarded me with questions about the Church the whole way.

A most articulate blackman came into my office this afternoon to complain about Mr Limpet, who treated him in a most brutal and insulting manner for merely passing through the wrong door. The man was most upset. I put him on the internal line to Mr Woodcock, who is seeking enough evidence to damn Limpet once and for all.

Unfortunately a Labour Council is in power at the moment and they will defend their own kind, however villainous they be, to the death. That is their sadness."


"Well, my imprecation at the Creative Writing Group was a great success this morning. As one gets used to the other members of the class, one tends to notice a polarisation of views on various aspects of literature that show the period of others of greater age as opposed to the younger members. And there is a strong streak of feminism in Kathy Jones, probably due to her unhappy marriage. The subject of bad language came up and there was a tendency to say the use merely reflected the reality of life. Pam Bolloch said that she would rather not hear such realities; and that was an end of the subject."


"Last Saturday when I was in the garden, Richard decided that we ought to make a gift of some of our rhubarb to Mrs Reames. He pulled out a stick and proferred it to her. All though (sic) it had not been my intent to bless her, I did not want to seem mean so I gave her a dozen sticks. I then took the opportunity of discussing her youngest son with her. He has been coming out of her flat then leaping over our side wall to get out to the road via our gateway. I suggested to his mother in the kindest way that it was possible that my foot might come in violent collision with his crutch if he did not desist. He seems to be desisting."


"We wasted our home evening last night by watching part of the Sound of Music. Despite our many watchings the magic of this film remains, in spite of the fact that Sue draws our attention to details that are best left unnoticed, such as Julie Andrews wet armpits in one dress. And there is a lovely scene where Christopher Plummer calls Julie Andrews 'captain' instead of 'Fraulein', a line fluff that the filmmakers have kept in, and a wise decision it was."
Posted by Steerforth at 6:23 pm

Oh I so long for an imprecation at a creative writing group. Do keep posting Derek: I'm hooked.

This just gets better and better, I had to look up 'Lamanite' - which was a revelation ( no pun intended ) and not what i was expecting!

How cruel he was to his would-be seducer, who sounded like she was a dream come true in view of his previous fantasies. I think he could have let her down more gently.

I didn't realise he was a preacher when he talks of 'marrying' people.

What quirky language he uses. Most entertaining. The arguments about swear words still go on a writer's groups. They certainly have to earn their keep in my writing.

My favourite phrase was about the "most articulate blackman".

Almost. Only one letter was changed to avoid search engines. Derek had a remarkable ability to seek out people with ridiculous surnames. My mother also had this gift and her acquaintances included a real Cynthia Snodgrass and a woman called Sybil Liquorice.

I'm finding Derek's musings very poignant. He speaks for the failed writer in all of us... And the winter is past joke is gloriously awful. More please!

I don't believe he's a preacher by profession; if he's a Mormon, then he's serving in a lay capacity to carry out weddings, since their community acts as clergy.