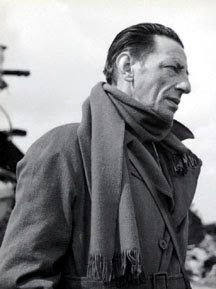 Two months ago I wrote this post about the recent Paul Nash exhibition. It had rave reviews (the exhibition, not my blog post, sadly) in the press. The general feeling was that at long last, Nash was receiving the recogition he deserved as one of the most significant British artists of the inter-war years.

Two days ago, I found this letter tucked away in a first edition of a novel called "Stanton" by Desmond Coke: 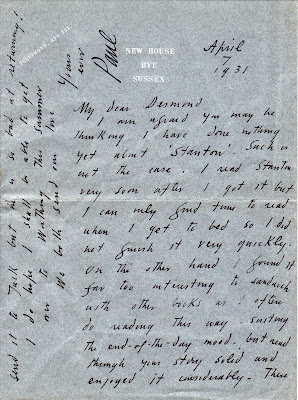 Stupidly, I hadn't noticed it when I was sorting through the books that had just arrived. It was only later, when someone said that they'd found a letter by someone called Paul Nash, that I realised what we had found.

In the letter, Nash praises Desmond Coke for his novel about life at a public school, but gently chides him for being too coy about the homosexual relationships that were common in that environment. Whether Coke read Nash's comments is uncertain. The letter is dated April 7th 1931; Desmond Coke's obituary appeared in The Times on April 28th.

I have contacted an auction house and at some point the letter will be up for sale. In the meantime, I'm enjoying being the temporary custodian of a piece of history.
Posted by Steerforth at 6:27 pm

Crikey! That's a hell of a piece of serendipity!

I do hope that's your pension sorted re the auction. ;- )

If only. Nobody would have known if I'd taken the letter, but I take my oath to the Queen very seriously.

How *very* exciting. I for one enjoyed reading your piece on the Nash exhibition. Have you encountered the work of Rupert Lee? He was a close friend of Paul Nash and looking at their work together is quite interesting. Fascinating that Nash is counselling more openess in his letter. I hope that you enjoy keeping it for a while!
Hannah

How great. And who didn't live in Rye? Must have been quite the hotbed of creativity in its heyday.

Rye's such a tiny place, but it seems to have been a magnet for creative people, rather like Concord was in the 19th century.

Hannah - I don't know anything about Rupert Lee and a search on Google images only came up with one picture and several men called Rupert Lee (or maybe Lee Rupert). I must find out more.