Many thanks to Richard at Grey Area for mentioning the show of work by the art students at Hastings Art College. I went yesterday and it was one of the best things I've seen for a long time.

It was really refreshing to see the work of people who hadn't become part of the system and while some pieces were quite derivative of artists like Grayson Perry, Tracy Emin and the Chapman brothers (who are Hastings alumni), there were others that had a very strong voice of their own.

But derivative or not, nothing I saw was boring.

I almost didn't go. My wife was given a new book to proof-read and needed a clear weekend to meet the deadline. I was on child duty. Was it really worth going if I had to drag two very reluctant boys with me?

In the end, my oldest son wasn't well enough to go and quarantined himself in cyberspace. I decided to take a chance with my younger son, hoping that he'd be have a slightly less jaded attitude towards anything that smacked of culture. To my surprise and delight, he loved the show. He was captivated by the sculptures and installations, laughed at the deliberately absurd pieces and described some works as "beautiful".

At four years old, my son had no idea what "art" was and treated the exhibition as a thing of entertainment and wonder. Having him with me actually enhanced the experience.

Here's a selection of the range of exhibits on display: 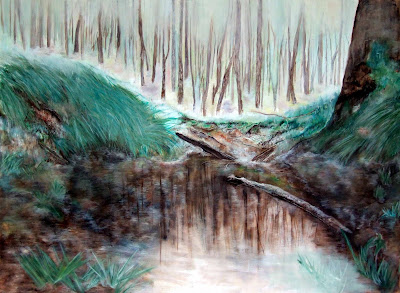 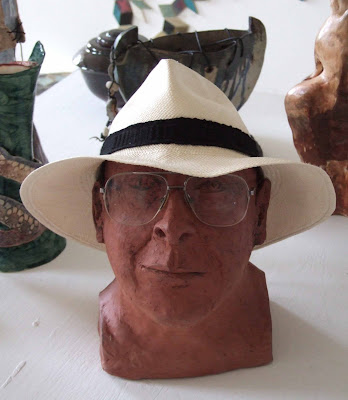 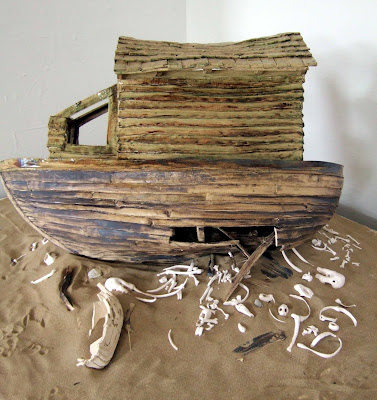 For some reason, this was my son's favourite, although he was also very taken with the exhibits in this room: 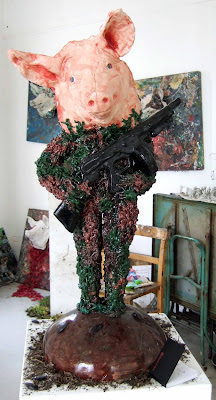 Later, during some fish and chips on the seafront, my son went into a reverie. I asked him what he was thinking and he replied "I'm imagining what fun I would have if I was at the place where they make things." 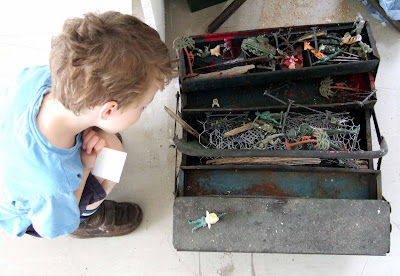 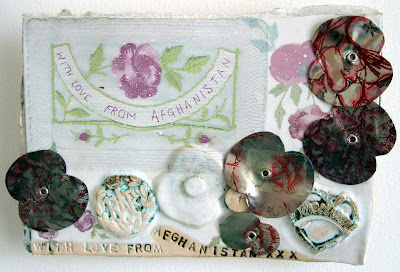 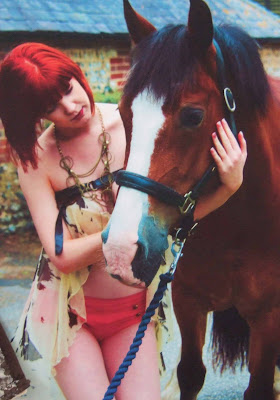 I've always liked the more traditional equestrian clothing, but I think I could get used to these. 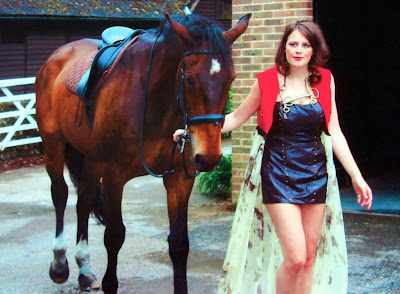 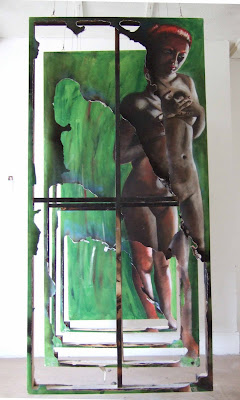 These are five separate frames, with a depth of more than ten feet between the first and the last. As you can see, viewed from the front they form a whole. 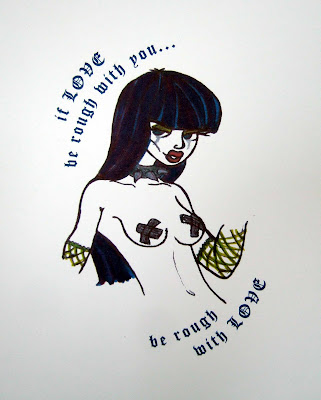 This is one of a series of cheeky illustrations that use quotations from Shakespeare. 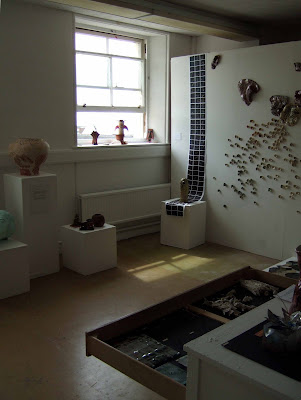 I really liked the way the work was exhibited and loved the building, which has beautiful sea views like this: 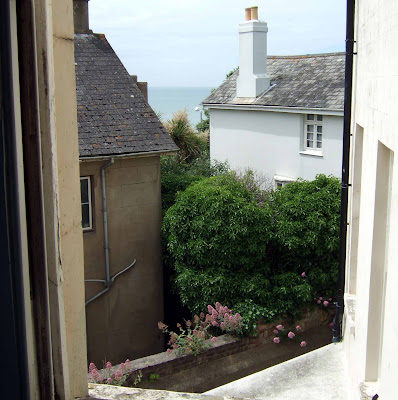 The college will shortly be moving to a new purpose built building, so this was my first and last visit to the Archery Road campus.

Finally, I came to the display of work by Richard's Graphic Communications students: 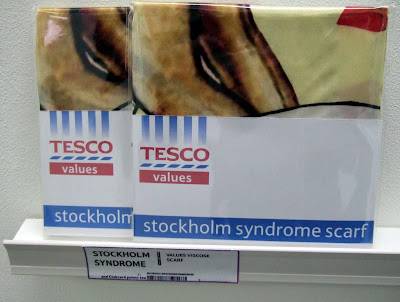 I loved this and really want to get hold of one - I'm going to make enquiries. Being a true hypocrite, I went shopping at Tesco this afternoon. I feel dirty now, and not in a good way either. 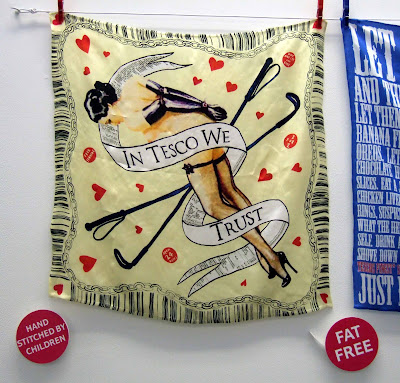 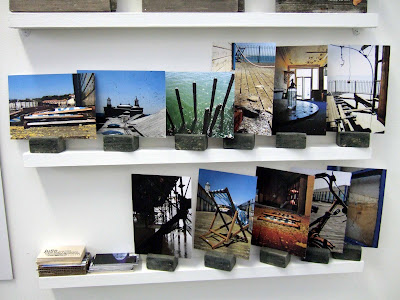 Eat your heart out, John Hinde. These postcards are better than anything you'll see on sale at the gift shops and tourist information centres. 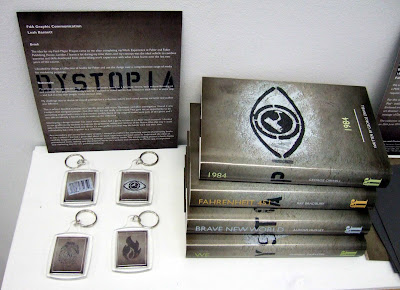 I was very impressed with these jacket designs for four dystopian classics. I trust that they would get the thumbs-up from James, at Caustic Cover Critic. 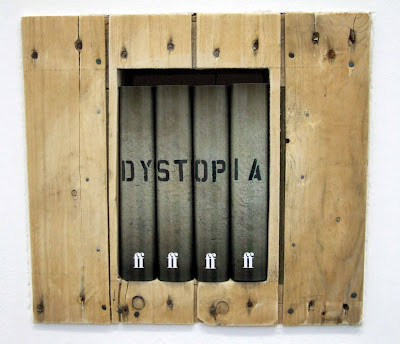 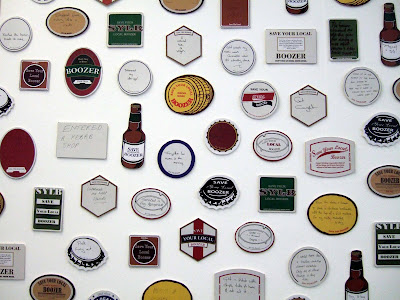 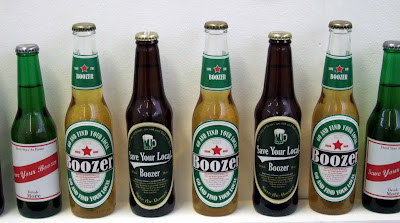 Without the cultural baggage and self-importance of the "art world", this exhibition was fresh, funny and fearless. It did everything that art should do, but so often fails to once it has become labeled and commodified. That doesn't mean that everything in it was brilliant, but even in the less impressive works - the sub-Tracy Emin canvases or the imitation Grayson Perrys - there was still an authentic voice.

It's a great pity that this exhibition lasts for only a few days before disappearing into the ether. What will happen to these students? How many of them will be able to make a living from their talents, particularly in our new austere financial climate? With funding for the arts under a greater threat than ever, the outlook seems bleak.

But art always seems to thrive during difficult times, when people need it more than ever. So perhaps, after the rather depressing era of Brit Art and silly money, we are about to enter a golden age.
Posted by Steerforth at 12:52 pm

I used to go to the degree shows to find new children's book illustrators. Brighton was always fertile ground, as was Bristol. I wonder how they are faring now. This looked like a great day out. I must remember for next year. Thanks.

Really glad you made it. It's such a beautiful old building ( former girls school ) and about to become luxury flats - but we have had a good innings.

With regards my design students, out of the 14 - 8 will be doing a BA hons top up year at Hastings, one is going to UCA Maidstone and another to Norwich to do the same - one is already working full time, and two are on gap years - one is in training for the 2012 Olympics.

There were 3 distinctions - and the girl who did the Dystopia book covers had a big thumbs up from Faber - where she did her work experience - she also designed a supporting iphone app which has been accepted to the apple store. Another is designing the signage for The Jerwood Gallery ( that's a live brief ) and the girl who took photographs from inside the derelict Hastings Pier is the only person allowed on there to take pictures since it was closed. Another boy is working for Lucy Bell and designing all the material for the Terry O'Neil photographic awards.

There are quite a range of different courses - most students go on to higher levels and the standard is getting higher every year - across the board student ages range from 17 to 70, although my oldest has been a woman of 87 who did my evening class in website design.

How refreshing indeed. My heart sinks that they are moving to a 'purpose built' college without the same soul (or views, no doubt)

New colleges are invariably a part of the commodification and homogenisation process of today's young as they add to that feeling of rootlessness and lack of historical context for their lives.

The new college is directly next to Hastings Station and the Art department has the whole 4th floor - it's fully glazed and we have almost a complete panoramic view of Hastings, St Leonards and round towards the Downs - every room has a spectacular view - many of the sea and the Castle.

It has the feel of the old St Martins building on Long Acre or the Royal College of Art - all the departments are newly fitted with wonderful provision for Jewelery and metalwork, printmaking and ceramics - and because we have our own floor - every student can see what's happening in all departments - I think that's really important.

There is a gallery on the ground floor which we have already used for this year's degree show and from today the new exhibit is work submitted for the 2010 Jerwood Prize, there will always be something on show - and the central atrium space will be used for exhibitions, performances and - as with this year, fashion shows.
I'm sad to leave the old building, but I'm actually quite excited about the future - and it's great for Hastings. Best of all - you can now get a decent cup of coffee in a rather nice cafe.

I do approve. These are wonderful--and your son's reaction to the show is so touching.

JRSM said...
This comment has been removed by the author.
9:20 am