My wife and sons have gone to Essex for two weeks - an eccentric choice, but thankfully inexpensive - so I shall be able to devote more time to exploring the Derek archives.

In the meantime, here's a selection of some of the photos that I've come across during the last few days: 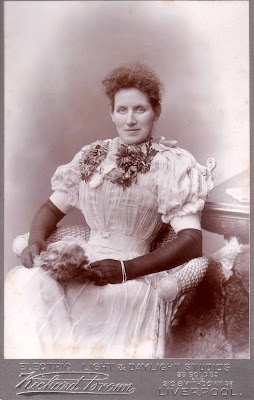 I found this in an album of Victorian photos from Liverpool. She certainly has a Mona Lisa smile, but I'm not sure about the weird gloves. 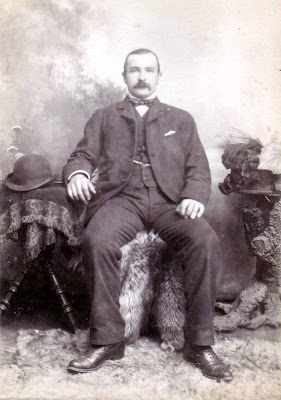 It's hard to judge the character of people from photographs when slow shutter speeds forced them to adopt a hard stare. Perhaps his face relaxed into a warm smile as soon as the flash went, or maybe he's just a tough bastard. Sherlock Holmes would probably say something along the lines of "Although he dresses like a gentleman, I see from his countenance and the thin layer of dried mud on the bottom of his shoes, that he is a member of the labouring classes." 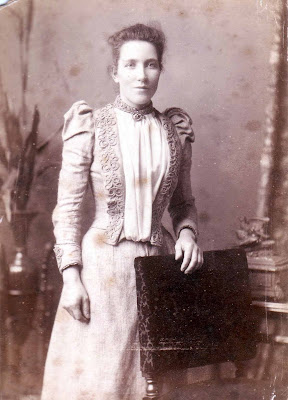 The classic late-Victorian outfit, with the exaggerated thin waist. My wife's great-grandfather grew up in Glasgow at the end of the nineteenth century and told her that he remembered seeing women in the back streets urinating where they stood. At first glance, he would see a respectable-looking lady dressed like the woman above, then he would notice a stream of urine emerging from their feet. Understandably, the women became very agitated and shooed the boy away.

I'll leave the Glasgow jokes to someone else. 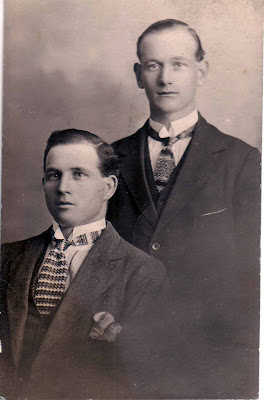 I'm not sure if this is a gay couple, a Victorian "Little and Large" stage act, or the first example of a confusing Facebook profile pic. 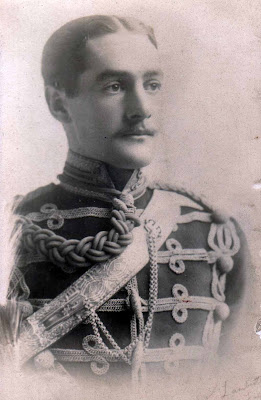 He's an commanding-looking chap. It's strange how impressive moustaches could be in those days. I couldn't help contrasting him with someone who appeared in last Satuday's Guardian Weekend magazine: 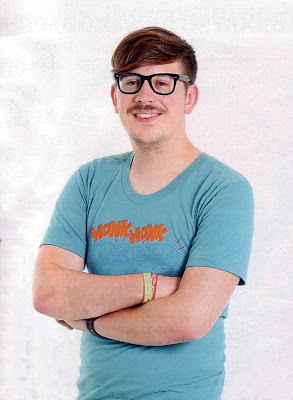 That's progress for you. 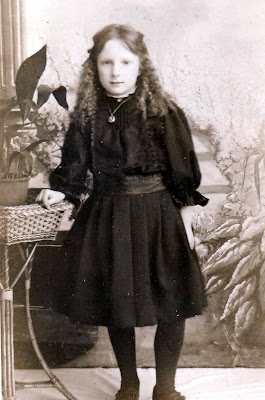 It's spooky to think that she's lived a whole life and died of old age, particularly as there's something very contemporary about her face. Perhaps that's because children weren't as good at maintaining a serious, Victorian expression. 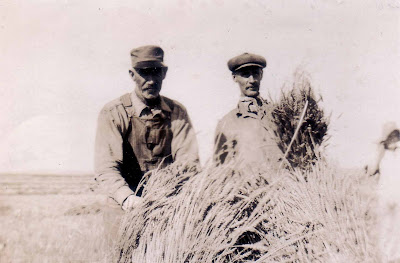 I can't think of anything pithy or slightly amusing to say about this. It's just three people with some hay. But I like it. 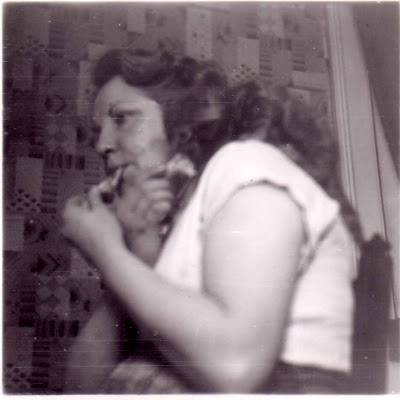 This is an odd picture. The print is the same size as the negative and I had to enlarge it. I'm not sure if the woman is pulling something out or putting it in, but she seems quite happy either way. This is from the good old days, when people would dress up to talk to horses. 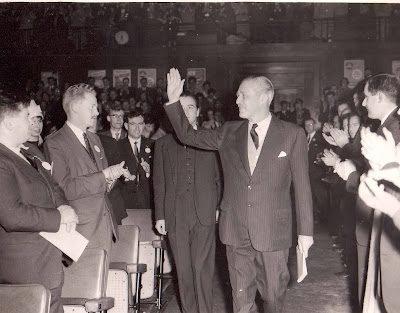 On the back, a caption reads: Prime Minister addresses Young Conservatives. As you can see, the term "Young Conservative" is an oxymoron. They can't wait to be 50 and live in Chalfont St Giles, regularly popping into town to visit their club, perhaps with the odd visit to Madam de Sade's for some corrective therapy (just like Nanny).

On the subject of photos, I must post a link to this post of "boring" (but curiously compelling) snapshots at Brett's excellent blog Branches and Rain, which also contains this wonderful post about the time he didn't die.
Posted by Steerforth at 8:58 pm

A memorable gallery as always. The little girl looked particularly eerie and a bit like Wednesday Addams of The Addams Family. I wonder if the 50s lady was putting in or taking out some false teeth?

I'll be back, I love old photos and pithies.
XO
WWW

Thanks for the bump. I wondered why I got 30 hits today. I lean heavily toward text, but people do love pictures.

Blogging has been a godsend to me. I'd never have written as much for a private diary. Whether anyone looks or not, there's something about "publishing" my thoughts that makes me want to write.

If only Derek could have published a blog, he might have found his writing more rewarding.

Some great choices here, most from the days when a lady had to be appropriately dressed for each of the day's many activities. No running around in jeans & tee shirt from sunup to sundown for them! More fun to look at than live through, I expect.
Thanks for another thoughtful post.
Canadian Chickadee

I love to look at these pictures, and feel so very grateful that I am not in any of them nor had to live their lives. The dresses, in particular, of the Victorian ladies make me feel breathless and constrained just looking at them. Although there is a certain freedom in being able just to wee wherever you like in your clothes.. I doubt that was compensatory for the rest of the restricting lifestyle women lived back then though.

I'm eternally grateful that I don't have to:

a. Sport a moustache
b. Die in the First World War
c. Exist on a diet of overcooked vegetables and offal.

However there are other things about the period that are very attractive.

Overall, I still think that the 1960s was the best time to be young, from what my wife's parents have said.

Urinating where I stand would be convenient, but riding my bicycle in the Victorian dress would be tricky. Maybe I'll try wearing a kilt.

The "Three people with hay" are actually with grain of some sort, hoping that it will be enough to live through the winter on.

And if they are very very lucky, brew a little beer of some sort from.