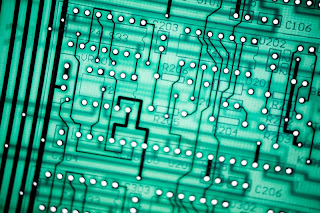 Technology appears to be developing even more quickly than I'd thought possible. Only the other day, I saw a poster in the local chemist that read: "Transfer your memories to DVD". Why would I want to do that? It seems like a high-risk strategy. On the other hand, if I could purge some of the most embarrassing experiences of my life onto a small plastic disk, I'd definitely consider it.

At work, I've just finished a trial of what is supposed to the the most advanced, cutting edge, state of the art (insert extra cliches here) voice recognition software. The program's selling point is that it adapts to the individual user's voice, becoming attuned to the subtle nuances of accent and timbre until eventually, it is word-perfect.

The program promised to revolutionise my department, speeding up data entry to the point where we could put twice as many books on sale every day, so I was very keen on the idea. I installed the software and started reading passages from different novels into a microphone, so that the program could become accustomed to my dulcet tones.

As the software also had a possible practical application in the warehouse, it was decided that someone from downstairs would come and join us.

I don't know who chose our new guinea pig. He speaks in a sort of animal-like grunt and is known as "Bear" by the lads in the warehouse (in fairness, the poor man has two teeth missing and the left side of his face bears a scar from dental surgery). It seemed an eccentric choice, but perhaps someone thought that this would be a true test of the software.

The trial began. I started reading out a stream of book details: "John Le Carre. Tab. The Spy Who came in From the Cold. Tab. Hodder and Stoughton. Tab..."

Meanwhile, on the other side of the room, "Bear" was grunting into the microphone and getting word-perfect transcriptions. What was going on? One person suggested that the moment I was put in front of a microphone, I started hamming it up, trying to sound posher than I was. I suppose that's possible, but surely if my hamming was consistent, the software should have picked that up?

I persisted for a week, as I had been assured that the program would evolve, gradually getting used to my voice. The final straw came on a Friday afternoon, when I was trying to enter the name of a children's publisher:

This time it said Lackey.

At this point I started to get really annoyed.

In the middle of this rant, the only non-white person in the building walked past and stopped in their tracks.

I think I got away with it.

After that incident, I decided to go back to good, old-fashioned two-finger touch typing. I've no doubt the day will come when we can transfer our memories onto a hard drive and have flawless conversations with computers, but it isn't here yet.
Posted by Steerforth at 2:33 pm

Progress eh! I love it that the machine responded to grunts and not RP, and you couldn't hope for better predictive text than its efforts on your speaking.

Be careful what you wish for though, one of the stories in Tokyo cancelled by Rana Dasgupta concerned saving only good memories onto discs, and that created more trauma than it erradicated.

You made us laugh out loud at the reference desk!

We wear little communication devices called Vocera Badges that use voice recognition. It can be maddening for some people to sign in with their names, or to try to call them.

Nice to know the livelihoods of data entry clerks are safe a while longer. Not least as a
60wpm touch typist myself.

Meanwhile I am conscientiously ignoring all self-service check-outs, no matter how long the queues.

Oh MARVELLOUS! That post actually made me laugh out loud, esp. The Father Ted-esque moment of desperation. And you seem such an unlikely sort of person for the volley of filth that the program suggested, unless, of course, you're all part of a secret government plot to.. I don't know. I should keep my day job, shouldn't I?

I'm so sad about Tony Judt's death, but your post cheered me a little. Although my work is Internet-based I'm not a computer-lover; but I can almost be reconciled to it by the thought of what this text-to-voice stuff can mean to the blind.