Seen on the way home from work... 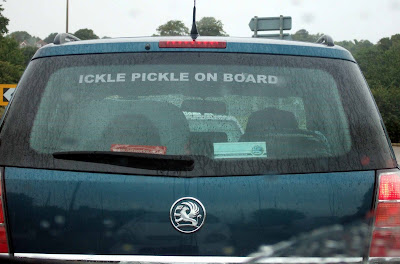 When was the last time you saw a car sticker that made you think "Hmm, I'd really like to get to know that person"?

I particularly hate all of the variations of the Baby on Board stickers: "Little Princess on Board", "Cheeky Monkey on Board" etc, although I did like one that said "Babe on Board", particularly when I pulled alongside and saw a rather plain teenage girl with severe acne sitting behind the wheel.

If I had my way, I'd ban 90% of car stickers. No more "I'm the bitch in front of you" or a picture of a Liverpool fan urinating on an Everton football shirt. In my Stalinist state, I would only allow tha proletariat a choice of five car stickers:
I think that's more than enough. Party members would,of course, be allowed to have their own stickers, but these would have to be genuinely witty or beautiful. Imagine being stuck behind a car in a traffic jam and seeing a quote from Middlemarch or Moby Dick?

Now there's a business idea.
Posted by Steerforth at 6:38 am

A while ago, I read a really funny piece about car stickers. The writer suggested that a law should be passed so that no car could display 'Little Princess On Board' unless the car was actually carrying a little princess.

Ickle Pickle is fine though.

I had to buy it, but have never had the nerve to stick it on my bumper.

Not true, but if it made me laugh until I cried, it might cause accidents re the drivers behind!

Agree with you about all those stickers bragging about drivers' fertility/ability to hatch brats though.

Our cockateil's cage has a 'Small Person on Board' sticker on it. My wife found it lying on the ground coming home one day and I guess she thought: I know where that'll go nicely and it does.

Reading that post again, I think I was just being unnecessarily grumpy.

Laura's right, some are funny (when you see them for the first time).

An Ickle Pickle is a little mischief.

Even the most clever car stickers suffer in that the joke is never as funny the second time around... and quickly becomes irritating. "I BREAK FOR HALLUCINATIONS" raised a smile the first few times... but no longer.

Caution: A decade or so ago I started to notice "MY [SON/DAUGHTER/GRANDSON/GRANDDAUGHTER] IS A [INSERT NAME OF SCHOOL] HONOR STUDENT" stickers on trips to the United States. This crass form of bragging has since spread to Canada. Here's hoping it doesn't migrate across the pond.

When i was in the states recently I saw "Don't blame me, I voted for the American" which makes all the "don't crash into my car because there is a child in it" stickers look inoffensive I think - that is not to say that I would have one of course

The one bumper sticker I've seen that I might (MIGHT, mind you, not necessarily WOULD) consider putting on my car --

It's trite and it's hokey, but if more people actually put this sentiment into practice, the world would probably be a nicer place.

I did make my own car sticker once - a yellow sign that said "ADULT ON BOARD". One day I noticed someone in the car behind staring at it intently. It was Hugh Grant.

I like the quotations idea - let's get the business plan for Bumperquotes sorted right now!
I would endorse your Stalinist plan, and would add that all cars carrying the fish symbol should be liable to rammed repeatedly, with no penalty.

The Age of Uncertainty would be an excellent bumper sticker.

I don't do car/bumper stickers, but there are a few that have made me laugh or nod in agreement:

My Karma Ran Over Your Dogma.

Hang Up And Drive.

Don't Laugh, It's Paid For.

Jeez If You Love Honkus.
(I haven't seen this one, nor Honk If You Love Jesus, for many, many years.)

Years ago, when I was a hip young publisher, I published a book about coke smuggling called Snowblind. We decided it would be a good idea to produce a bumper sticker saying, 'Toot if you've read Snowblind'. I stuck one on my car and forgot all about it - nobody at all had read Snowblind, it appeared. Months later I was honked for no apparent reason - I had a mild attack of road rage, gave the driver the finger and sped off. It was only later I remembered the bumper sticker...

I remember Snowblind very well. It was one of those cult, word-of-mouth books that people kept ordering (until we did the sensible thing and made it a stock item). Robert Sabbagh?

I love the anecdote.

Robert Sabbagh indeed...republished not so long ago by this generation's hip young gunslinger, Jamie Byng.

Love the blog, by the way!