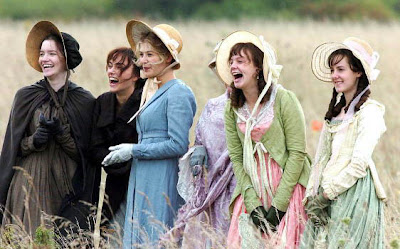 According to an article in yesterday's Guardian magazine, the good times are over for the middle class. A combination of economic recession and a fundamental change in the way we work, described as an "ongoing hollowing-out of the middle ranks in the British job market", will see an increasing number of people struggling to maintain a lifestyle that felt like a birthright.

I read this article with a curious detachment. Perhaps this is because I have never felt truly middle class. I have all of the trappings: a BBC accent, hundreds of books, a permanent supply of balsalmic vinegar, tasteful contemporary watercolours on the walls, Laura Ashley sofas (thank you Joyce) and the obligatory wooden floor, but I still fear that knock on the door, when they come to arrest me for impersonating a middle class person.

I grew up in a house where there were no novels and slept under nylon sheets that glowed in the dark with static electricity. My mother read The Sun and kept our loo rolls in knitted covers with a plastic ballerina at the top. We were the respectable working class. My parents believed in hard work, owning your own property and saving rather than spending. To them, gambling, smoking and drinking were utterly immoral and threatened to plunge them back into the class that were striving to leave behind.

I was the cuckoo in the nest. I spoke with a different accent, listened to Sibelius and liked "funny food". In later years, my father asked why I wanted a wooden floor: "In my day, that meant that you couldn't afford a carpet."

I clearly wasn't working class, so I must be middle, but when I read the Guardian article I still found it very hard to relate to any of the people mentioned. I certainly had nothing in common with a couple in Richmond, who earned at least £150,000 between them, but I also felt pretty remote from the Ormsby family, who were cited as being at the poorer end of the middle classes.

At first we seemed to have some things in common. Like the Ormsby's, we were driven out of London by the property prices and led a pretty frugal existence, expecting a week's holiday in France if we were lucky. But then I read that Kate Ormsby earned £39,000 and her husband, who worked in the same department had a lower-paid salary. Realistically, that put them on at least £60,000 per annum.

I have worked out that we are living on around half of that - hovering around a figure that the Joseph Rowntree Foundation calculated was the absolute minimum that a family of four could live on.

This "Minimum Income Standard" was announced a few weeks ago and in some ways, reading it came as a relief. Rather than feeling guilty for not managing our finances properly, I realised that we had worked minor miracles, surviving on a relatively low income. There have been sacrifices but when I look back to the 1990s, when we enjoyed a double-income and several holidays a year, I still feel richer.

I can think of several couples who work absurd hours, paying exhorbitant childcare fees just so that they can live the dream. They have the house in leafy SW London, the obligatory three or four holidays a year (including a trip to Lapland at Christmas) and the perfectly-designed garden. The fact that they barely see their daughters doesn't seem to come into the equation. The children have everything they want (apart from parental contact), go to an expensive class on Saturday morning and have a whole wardrobe of party dresses. What more could anyone want?

This recession will be a challenge for many, but I hope that people will use the current demise of the consumer society as an opportunity to realise that the "lifestyle" myth of the last 20 years hasn't made anyone happier. Indeed, many of us have become oppressed by debts and clutter.

I'm not romanticising about being skint. I'm not sure if poverty is good for the soul (I'm sure that the Poet Laura-eate wouldn't think so), but when I see people who earn four or five times as much as me looking so miserable, I can't help feeling vindicated. The best things in life are free, whatever the adverts say.
Posted by Steerforth at 5:45 pm

As soon as I've figured out a way to earn £5k pretty quickly, I'll enjoy the luxury of agreeing Steerforth!

But yes, it strikes me that the 'average' middle class income is always based on a couple earning at least £60k per year in the glossy magazines and that's at the poorer end of the spectrum!

Where are all these wonderful jobs???

I had a friend once, my best friend once, whose family lived in the good part of town in a big house - they had two mini grand pianos put it that way - and I remember once getting into a discussion with him over whether his family was middle or working class since his father (although admittedly not his mother) had to work, as an employee, to maintain their standard of living. He finally admitted they were probably "upper working class" which I found amusing and a little sad that that mattered to him so much.

Some years later when he's moved to a nice house in Troon with pine trees in the back garden I remember pointing out to him that he probably actually owned his front porch. Even the BMW in the drive was a company car. It was about this time that we simply forgot to keep in touch.

I often feel a strange affinity with you when I read your posts. I too don't really belong anywhere in the favourite parlour game of the great british public - the class system - but I have come to think of that as an advantage. In terms of the guardian article - it reminded me of comments which were made in the late 1940s after the Labour government came in and introduced what was a real "austerity" budget - huge cuts and massive hikes in taxes most of which hit the middle classes and they had to learn to do without live in servants etc. I don't think that we are looking at the extinction of the middle classes any more now than people were then - people at all levels of society will simply adapt to what is and is not available.

And you're right: that sound doesn't do much to preserve the soul.

I too love your posts, Steerforth. And as someone who has spent a lot of time in three major industrialised countries (Canada, Britain, and now America) I have learned both the hard way and by observing my fellow beings, that THINGS do not make us happy. PEOPLE make us happy. Sometimes I feel sad when I see members of my family tearing around, too busy to stop and chat or have a cup of tea, because they have something "better" (and probably more expensive) to do. Am I middle class? Upper lower class? Lower upper class? Damned if I know. After 50 years or so, I still haven't figured it out. Canadian Chickadee

My grandparents escaped farm life by going to teachers' college. My father, after The War, worked his way through medical school driving a taxi.

He used to get upset at The Beverly Hillbillies on TV. Those Hollywood Jews were making fun of him.

He loved classical music, having played the violin in high school, but he couldn't relate to novels. Why would you want to read something somebody just made up?

As for myself, after all, I am just an old hippie, though my hair is now short and I've worked for the county library for twenty years. We made do with one car for years, with one or the other of us taking the bus to work. We now have one car, (hers), and a scooter, (mine).

As Lily Tomlin once said,"The trouble with the rat race is that even if you win, you're still a rat". Most people, IMO, would still be all right if they didn't piss their money away the way they do.

I think I'm an old hippie too.

Shelley, if you hear gunshot where I live, it's usually the sound of the landed gentry "huntin' and shootin'".

Like CC and Hannah, I don't feel that I belong to any particularly social class. Most of the people I get on with are outsiders in some way.

Jim, I've had similar experiences and I no longer keep in touch with either of the friends who asked me to be best man at their weddings. It's sad, but our values became so different that I couldn't have an honest conversation with them any more.

Laura, I'm looking and when I find one I'll let you know.

Our backgrounds are so similar it is almost comical. And our incomes.

Well, as the quote goes, we may be lying in the gutter, but we're looking up at the stars.