I'd always thought that colour printing was a 20th century invention, but I was wrong. Within the last few weeks, I've found several Victorian books with stunning colour plates. My most recent discovery is an 1871 title called Aunt Friendly's Book of Gifts.

The illustrations are remarkably vivid, but the book's main surprise is it's depiction of popular nursery rhyme characters: 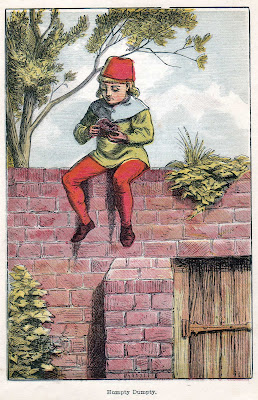 In this picture, Humpty Dumpty isn't a large egg with limbs, but an ordinary boy (if wearing a red fez and green jerkin counts as ordinary). On another page, there is a conventional illustration for See-Saw, Margery Daw, but instead of Johnny, it is Janey who shall have a new master. 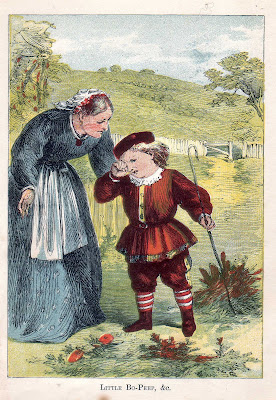 And in this plate, Little Bo-Peep is a boy. The remaining illustrations are quite conventional, but it is so unusual to see engravings from this time with colour: 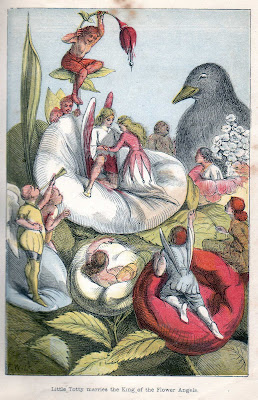 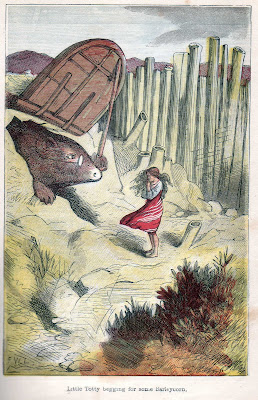 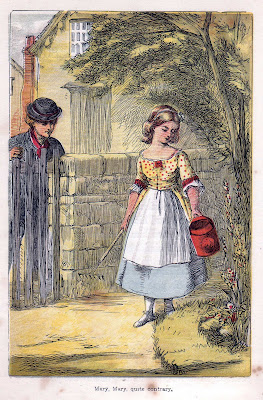 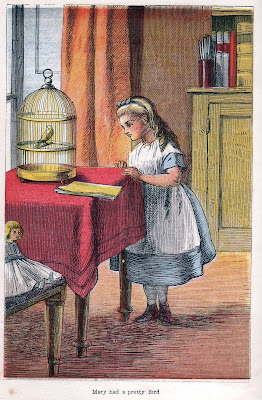 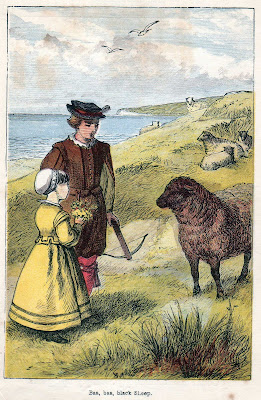 The cliffs remind me of Sussex, but why is the young man carrying a crossbow?

I've found even earlier titles with good quality colour plates, which makes me wonder why it took roughly a century before colour illustrations became the norm rather than the exception.
Posted by Steerforth at 9:36 pm

Expense maybe. What a great find.

Yes, expense. But it's strange how long it took to develop the technology for cheap colour printing, whilst the gap between the Wright brothers' first flight and the Apollo 11 Moon landing was a mere 65 years.

How exquisitely simple life seemed in those days.

But only if one was lucky enough to be born middle-class I don't doubt.

Lovely illustrations. We often forget how advanced the Victorians were, I think.

It's much more complex than just expense. Colour printing and tinting have been around for a long time, but were expensive, time consuming and very wasteful - so only small numbers of books or folio's would be produced, hence their consumer was wealthy, educated and had 'leisure time' - hardly anyone in Victorian England would fit into that niche - even the 'middle classes' would baulk at the extravagance of colour print. as a new technique - it was also an 'entertainment' - which is why it was generally dedicated to expensive childrens books ( and scientific folio's ).

If you have a really close look - you may find that some of the more subtle colours on your plates are hand applied - far cheaper than contemporary print.

Richard, that was genuinely fascinating.