In my office, there is a magical door that transports me into a strange, cold world, populated by a species who live in semi-darkness for most of their lives. It is an intimidating place, but I have to go there, as that's where the books are kept.

Sometimes I wait until after sunset, when the cacophony of noise is replaced by an eerie silence and I can enjoy hunting for first editions without risking being crushed under the wheels of a forklift truck. But most of the time, I have to enter the warehouse during working hours, negotiating my way around huge stacks of boxes as if I am part of a giant Tetris game.

Once I've found what I'm looking for, I climb the metal staircase that takes me back to warmth, sunlight and silence. I feel grateful and guilty.

The warehouse is another world. It is cold, dirty and uncomfortable, with a noise level that seems to reduce ordinary conversation to a series of shouted expletives. The staff are a mixed bunch, but most are young lads who have barely started shaving, but still seem to have at least one child.

Two weeks ago I was given the go-ahead to expand my department and recruit two extra members of staff. I already have three brilliant graduates who barely required any training, so I decided to advertise externally for two more. Unfortunately, the word got out in the warehouse and I have received several internal applications.

I know why people are applying. They see my department as a "cushy number" and I suppose it is. We have chairs, windows and heating, which are something of a luxury in my workplace.

Unfortunately I don't think anyone actually knows what we do. The nearest someone came to the truth was describing our work as "data entry" (which was an improvement on the person who asked me what fiction was), but it still fell short of the mark.

It's a very awkward situation. I don't think I'm being that fussy, but I would like someone who can spell, knows that George Eliot was a woman and doesn't keep asking me to translate Roman numerals for them. But regretably there aren't many people in my building who tick any of those boxes.

It's strange, because most of the people I work with seem bright, funny interesting people who could be perfectly capable of doing a fairly straightforward job like valuing and writing about antiquarian books. Why are they leaving school without the skills needed to do this?

Sadly a lot of the external applications haven't been any better. Take this extract from a covering letter I received recently:

"i am currently avalible for immidiate start and have a good knollage of authors and different type of books which i think would be good to bring to the team and be a big help with the job."

Given that the job description asked for a high standard of written English, this sentence was quite breathtaking. I was tempted to write back, advising the candidate (in the kindest way possible) to at least use the spellcheck facility. 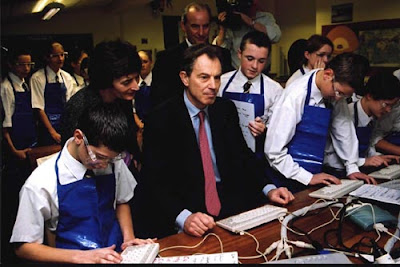 Posted by Steerforth at 4:48 pm

I'm sorry to say it's the same here in Holland. I am a teacher myself and I know I'm trying to teach my students to write properly, but it seems as if nobody cares anymore. It's sad.

I have found that true bookmen, ( and women), are rare, even in the bookselling and library worlds.

I was surprised to learn, through a Facebook group for a bookstore chain I worked for in the '80's, that none of my former workmates continued to work with books after their time at the store. My former manager ended up selling lighting fixtures. It had just been a paycheck for them.

Have you tried advertising your positions with university English departments?

Brett - Yes, I have. One of my staff suggested a university website and it has resulted in a deluge of first-rate applications.

I'm not surprised about the former colleagues. I think that bookselling is something that many people do because they haven't decided what to do with their lives. That was certainly my main reason, but I ended up finding a vocation.

Caroline - I'm shocked to learn that it's like this in Holland too. I've always assumed that European education systems were far superior to those in Britain and the USA.

I wonder what the cause is?

In my case, I noticed that the teachers who trained after the mid-60s seemed to regard good grammar as some sort of fascist construct. They valued free expression more than clear prose.

The older teachers, who made me write the correct spellings of words three times at the bottom of the page, did me more favours in the long term.

What I don't understand is how over ten years of Government-led literacy initiatives have had such little impact.

I think the teachers who hated grammar is a bit of an urban myth - and I trained in the seventies.
What is true, though, is that the literacy initiatives were little more than ill-designed busy work to fill the timetable, and hit the spurious targets that the government introduced. Much of what goes on in schools is now about passing tests, not learning. It's a very great shame.

I think we have to be careful about judging this generation on their basic writing skills. I teach 16-18 year olds - many of them much more savvy and sophisticated in their thinking than I believe I was at their age. Their grammar and mechanics are dodgy because they rely on word processors. They don't much like 19th century literature, but they love Ondaatje and Guy Ritchie. The world is moving on, and these kids are moving with it.

I'm sure you're right Rob - my view was completely subjective.

It's a great pity that the literacy hours were such a failure. Teachers have been warning us that this would happen for years. Why didn't the Governmen listen?

However, I often find that their written abilities don't match their verbal. The other day I asked someone to write some letters on my behalf and was horrified to find "recieve" and "thankyou". He graduated last year.

I don't mean to sound all Daily Mail about this. In my job I find lots of letters from the past and it's clear that there was no golden age of literacy, but I do think that standards have fallen sharply in recent years, if the job applications I receive are anything to go by.

As a university lecturer, one of the things I observe more and more is how some students are utterly unable to think for themselves, to organise their work, to be a student. And it's because they have been spoonfed through school, as more than one teacher has candidly admitted to me. The name of the game has become hitting the targets, and teachers have colluded with this culture, to the extent where they are almost doing the work for the pupils. One first year asked me this year "aren't you going to give us the first paragraph?" when presented with an assignment, and was astonished when I said, no, the idea was that he did the work. An A level teacher i know confirmed that "scaffolding" was common - students are supplied with openings, conclusions, which quotations to use, which points to emphasise - so it's really joining the dots rather than writing. My favourite so far was the student who was advised after a very poor piece of work that she needed to do more research. "What, you mean books and that?" she replied.

You are writing about MY job. Why, oh, why are you on the South coast and I in Scotland?

I've put "Open branch in Scotland" on my year planner.

I think, Rob, that your anecdote about the student being aghast at the idea of reading for research shows the problem at source, in that high school kids are reading less and less. There are too many distractions - a surfeit of movies, images, screens - and easier, faster ways of accessing information; reading, by contrast, seems laborious. That's why teachers have to scaffold for them - to make the structure behind formal/academic writing more explicit. I don't know about you, but I never got that in school. I just picked it up by doing lots of reading and writing - trial and error really.

I'm teaching IB lit, and while I don't write paragraphs for them, I might do a lesson comparing introductory paragraphs for an essay. I would have them look at the different approaches and pick out the ones we thought most effective, before writing. Hopefully, by the time they got to you in university these skills would be well in place. As a teacher you have to find strategies that help them be successful in the current context.

BTW My students are all either bi- or tri-lingual, so they're also surfing between languages and cultures. I think we forget the impact of technology and globalisation in the last 10-20 years. We are trying to prepare kids for a world that is experiencing massive and fundamental shifts. Teachers have to be pretty resourceful and very creative. You wouldn't last 5 minutes with just chalk and talk any more.