The Death of Steerforth 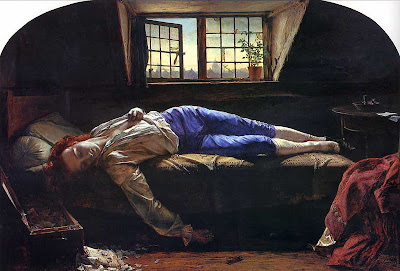 Actually I think it's probably just a virus, but being a man I feel duty bound to lie in bed and suffer from intimations of mortality. If I can't get in the mood, there's always some Shostakovich on my MP3 player. I defy anyone to listen to Six Poems of Marina Tsvetayeva without succumbing to the urge to throw themselves under the nearest bus replacement service. However, when I was 17 I couldn't get enough of it.

I miss the emotional highs of being a teenager - the delusion that you are the hero of your own novel, embarking on a great adventure. I didn't relish discovering that in reality, I was a minor character in a badly-written blockbuster. However, I don't miss the terrible angst and black depressions that seemed to appear from nowhere.

I agree with Shaw that youth is wasted on the young. Looking back, my teens could have been one long snogfest if I hadn't been so idiotic. For example, when a girl asked me if I was interested in going to Paris for a weekend, I concluded that she might fancy me, but there wasn't enough evidence to reach a firm conclusion. How stupid can you get?

Instead, I spent far too much time listening to Mahler and watching obscure European films (although I'll admit that the latter was partly for the gratuitous nudity).

In spite of this, I would give anything to recapture a feeling I had when I was 19, walking along a moonlit beach in Dorset. I have been to many far more remarkable places since then, but my responses are always tempered by a terrible self-consciouness: here I am on the edge of the Grand Canyon and I can see that it is awe-inspiring, but am I feeling what I should be feeling? In Dorset, I experienced a perfect moment; perhaps because I was surprised by joy (and top marks if you spotted the references to both C.S.Lewis and a Martine McCutcheon single).

I'm still have those wonderful serendipitous moments, but the moment I become aware, the bubble bursts. It's very annoying.

If you're wondering what the point to this post is, I'm afraid that there isn't one. These are the demented ramblings of someone in the advanced stages of Man Flu, with his whole life flashing before him. I do apologise.
Posted by Steerforth at 6:36 pm

Condolences! However, I'm glad that my first instinct was wrong--when
I saw the post title I feared you were about to announce an end to your blogging.

I had a Dorset moment like that which stays with me more vividly than the details would suggest: wandering around looking up at the stars on a clear night in country South Australia with a car full of friends arguing good-humouredly over a map somewhere behind me. Lovely, though I can't explain why.

I hope you feel better soon. I loved this post of yours. I know exactly what you are talking about. Whenever I feel like I didn't wring enough out of my 40 years on this planet I just think about all the stuff I can do in the next 40. But it only partially works. Youth is wasted on the young. Sigh...

I'm glad it's just the man-flu - love the associated hyperbole (is that the right word?).

Youth is great to look back on though, so it's not totally wasted.

Can't believe I forgot to say I hope you get better soon (too busy musing about youth).

What a beautiful post. I identify with it and the emotions therein entirely, despite being a girl, and was similarly naive about the opposite sex as a teenager.

I think you are a lot more special than you give yourself credit for, and will yet achieve some sort of greatness, so do not be too hasty to write yourself off!

Hope the man flu has cleared up now.

Thank you for your kind words (and it's heartening to know that so many others know exactly what I'm talking about).

As for the "Man Flu", I think the crisis is over, but sadly three months' convalescence in the south of France isn't on the cards.

Lovely post. Endearing really. I do believe that day of reckoning in one's life is the hardest to bear.