In the age of the internet, it is easy to become blasé about images that would have once created a stir, but there are some photographs that still induce a powerful, visceral reaction. This is one of the most stunning pictures I have ever seen: 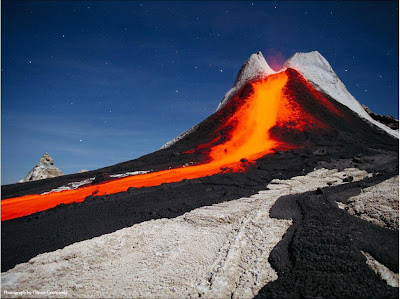 It's not just the proximity of the photographer to the lava flow, or even the great technical accomplishment of capturing both the fiery glow of the magma and the faint stars in the early morning sky that makes this image a masterpiece. It's the contrast between the extremes of beauty and terror.

I've been obsessed with volcanic islands for years and four years ago, I decided to go to Iceland. Apart from one near-death experience, I had a really good time and saw some wonderful things.

If you ever want to get away from it all, Iceland is the place to go. It has the one of the lowest population densities in the world and it's possible to walk for hours without meeting anyone. Iceland also has the lowest biodiversity rate of any country and the defining features of the landscape are rock, water and sky: 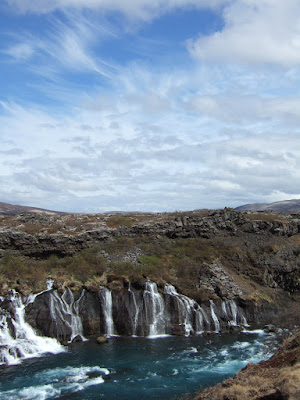 Such an austere landscape may not be everyone's cup of tea, but I loved it. You can drink from the rivers in Iceland (and it is the best water you'll ever taste, I promise) and the purity of the air has provided relief for many asthma sufferers.

But what I also love about Iceland is that in spite of its benign exterior, the island is sitting on a geological powder keg. Steams pours out of fissures in the ground, pools bubble like cauldrons and occasionally, there are violent volcanic eruptions, some of which have resulted in hundreds of deaths.

At school, we are told that beneath the Earth's crust, there is a magma of molten lava. In Iceland you can almost feel it through the soles of your shoes.

Posted by Steerforth at 9:30 pm

Ah volcanoes, that other great childhood obssession aside from dinosaurs and museum mummies, particularly the story of how a volcano turned the people of Pompeii into mummies. A two-for-one obssession to keep the under-10 brain awake at nights.

That splendid photo brought it all back.