The last two days' deliveries have yielded some superb discoveries. After writing about Diana Dors a few days ago, I was excited to discover this kiss and tell memoir: 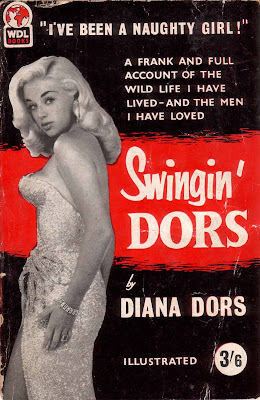 "I've been a naughty girl!" declares Dors, giving a little frisson of excitement to vicars, bank managers and headmasters all over the country. The title's great too - if you like tabloid-style puns (and I do). Unfortunately, this book hasn't joined "Testament of Youth" in the pantheon of great biographies that never go out of print.

Next, a poem that I found on a folded-up piece of paper inside a book: 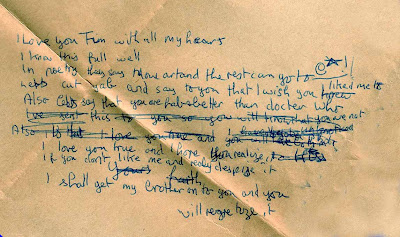 I love you Tim with all my heart
I know this full well
In poetry they say thou art and the rest can go to ****!
Lets cut yab (?) and say to you that I wish you liked me to
Also lets say that you are fab and better than doctor who
I love you true and I hope that you realize it
If you don't like it and really despize it
I shall get my brother on to you and you
will regretize it.

To think that I almost threw the piece of paper away, unaware of its hidden treasure. I don't know when it was written, but "fab" had become passé by the mid-1970s.

I wonder if the author "regretized" writing this poem?

On a slightly more exalted note, another book yielded this leaflet, with a beautiful woodcut by Robert Gibbings: 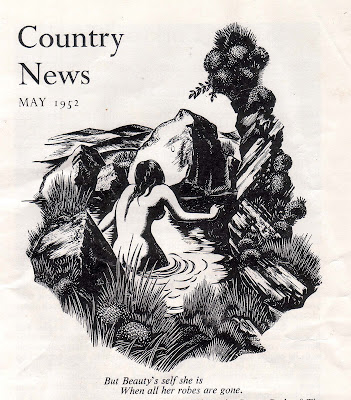 I'd never heard of Robert Gibbings, but apparently he was an Irish artist who was a colleague of Eric Gill. I've looked Gibbings up on Google images and there are some stunning engravings and prints.

On the subject of illustration, every since I wrote about Victorian colour printing technology, I have discovered around a dozen nineteenth century books with plates that seem far ahead of their time. This is the frontispiece to an 1874 copy of "The Heir of Redclyffe": 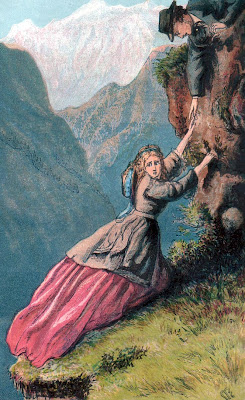 The bold, vibrant colours are very impressive and haven't deteriorated with age, unlike this photo: 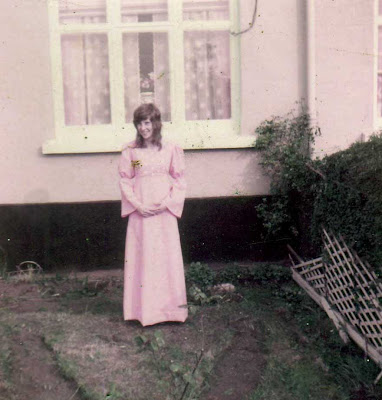 The fashion suggests 1971-73 - maxi dresses with puffy sleeves were a relatively short-lived fashion. I love the contrast between the glamour of the dress and the bland, suburban setting: the television ariel cable disappearing into the window with nylon net curtains, the patchy lawn and half-broken fence.

It reminds me of some photos a friend used to receive from his penfriend - a girl in Nottingham.

She liked to design and make her own clothes and would create costumes that made Steve Strange look like Man at C&A. Once the outfits were complete, she'd put them on and have her photograph taken. When I saw the pictures, I always used to notice the contrast between the glamour of the clothes and the drab setting: the front room of a council house, with a gas fire in the background, a faded Hay Wain on the wall and a complete absence of books.

I wonder if there were any bookless houses in the Socialist paradise of the Soviet Union? 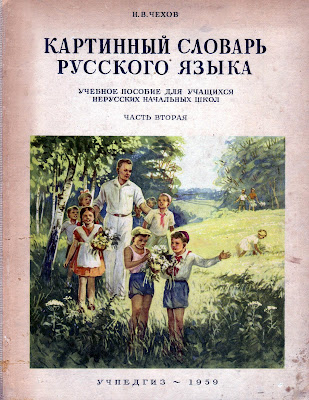 My Cyrillic's a little rusty, but this picture clearly says that all's well in the Motherland: the wheat quotas have been met, the five year plan is on track and Utopia is just around the corner.

In fact, this is just a school textbook for young children, with lots of pictures like these:

I couldn't find any illustrations of gulags, enemies of the people and bread queues, but many other aspects of Russian life are represented in this book and apart from a few pictures, it's as if the Revolution never happened.

How do I get from Russia to the King of Greece? I'll take the Orthodox route. The next item is the front of an envelope I found in a book:

It isn't every day that you find correspondence to the king of Greece. The letter is from a Mormon, warning the King about World War III and World War IV. I have no idea why the Mormon felt that it was so important to warn the king of Greece, but he made a bad choice, as Constantine was deposed in a coup a year or two later. 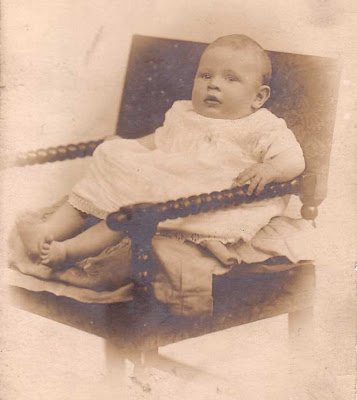 I can't think of a link from the King of Greece to this photo, although the baby does have a regal bearing. His name is Maxwell Craig Barton, born just over 90 years ago on February 6th 1920. It's possible that he is still alive.

Finally, glasses. I think that some women can look incredibly sexy in glasses, but I'm not sure if this is one of those occasions: 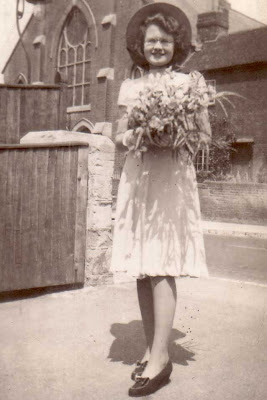 Thicker frames might have done the trick and perhaps an outfit that was less Little Bo-Peep, but fashions change and today's Diana Dors is tomorrow's Katie Price.
Posted by Steerforth at 8:50 pm

Thanks for finding this information. How sad that Maxwell Craig Barton only lived to the age of 43.

Are you going to send them a copy of the picture?

I think the line in question in the poem is "let's cut gab" - gab meaning chat or blah - so 'let's cut the crap and get to the point' by extension.

That girl in the home-made clothes needed a blog!

A blog would have been perfect for her - perhaps it would have helped her to meet lots of like-minded people, instead of focussing all of her hopes on a distant penfriend in Twickenham.

To everyone's horror, my friend actually married her.