This evening I caught a few minutes of the news and had the misfortune to hear an excerpt from the Liberal Party conference. I know very little about their leader, Nick Clegg, but he managed to achieve the seemingly impossible task of making even Gordon Brown look interesting.

Unfortunately, Nick Clegg is the rule rather than the exception. In today's media age, politicians are subject to such a high degree of scrutiny that it encourages a culture of blandness and conformity. Where are the mavericks?

By coincidence, today I discovered an autobiography by a political maverick from 50 years ago, called Sir Gerald Nabarro. Apparently he was famous in his time... 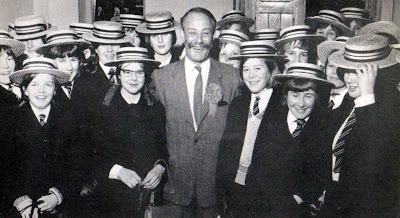 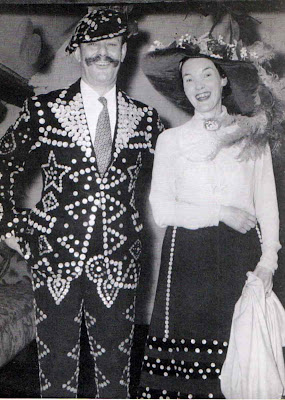 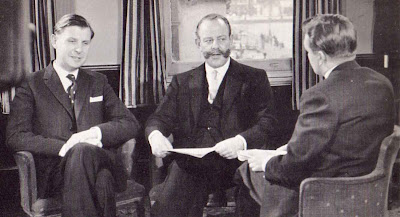 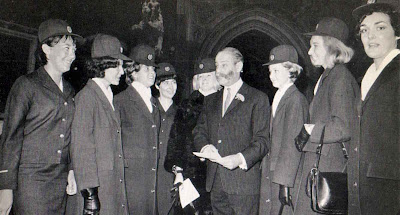 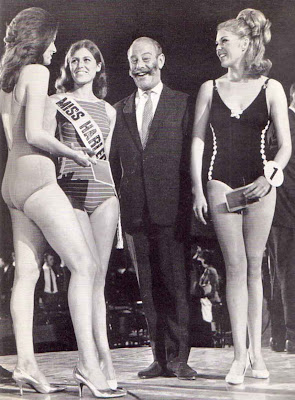 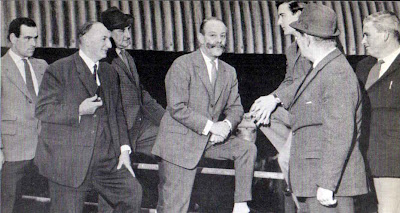 I instantly warmed to Sir Gerald's aristocratic demeanor and ridiculous moustache. He looked like a man who said what he liked, regardless of the party apparatchiks, because he was probably rich enough to be incorruptible and had a strong sense of noblesse oblige.

However, a brief amount of research (i.e. Wikipaedia) reveals a different story:

Nabarro was born in North London, the son of an unsuccessful shopkeeper. He was born to a prominent Sephardic Jewish family but later converted to Christianity. He was educated at schools run by the London County Council, belying his later image as an aristocrat. On leaving school in 1930 at the age of 16 he enlisted in the Royal Army, in which he served for seven years, rising to the rank of Sergeant. In 1937 he left the army to work as a machine-hand, being swiftly promoted to be factory manager.

In the 1950 General Election, Nabarro was elected as an (MP) for Kidderminster, Worcestershire, which he held until 1964. He characterised himself as an old-style Tory: he opposed entry to what is now the European Union, was a proponent of capital punishment, and supported Enoch Powell. In 1963, during an appearance on radio, he said "How would you feel if your daughter wanted to marry a big buck nigger with the prospect of coffee-coloured grandchildren?" - remarks which were excised from a repeat of the programme the following week.

Comments that like that could have been the kiss of death to Nabarro's political career, but he continued to sit as a Conservative MP and was one of the most popular figures of the 1960s. Nicknamed 'The Abominable Showman', Nabarro claimed that 'Half of Britain swears by me, the other half swears at me.'

However, in 1971, Sir Gerald and his company secretary, Margaret Mason, were accused of driving the wrong way around a roundabout. Nabarro was eventually acquitted, but the general consensus was that he had been driving and encouraged his secretary to take the blame. It was hardly Chappaquiddick, but Nabarro found the whole episode very traumatic. A normally healthy man, he suffered two strokes and died at the age of 60.

You may think that this is leading up to a point, which could probably be something along the lines of conceding that however bland today's politicians are, at least they don't talk about 'big buck niggers.' But I was more struck by how Nabarro's bigoted comments and eccentric persona could only be the product of someone who was an outsider, insecure about their own social status. If Sir Gerald had been genuinely aristocratic, I doubt that he would have felt so threatened by change.

For all his faults, Nabarro did do the British public one inestimable service. He was responsible for the Clean Air Act of 1955, which bought an end to the dreadful London smogs and probably helped to save thousands of lives.
Posted by Steerforth at 8:33 pm

Bloody hell. What with those pictures, I was really warming to him, until the dreaded words "Enoch Powell", and it was all downhill from there.

Social commentary aside, I plan on doing the "bended knee" pose for every photo I'm in from now on.

Can I have permission to copy and publish the photo of Sir. Gerald Nabarro at teh Mrs Harriers contest for my weblog, The Wyre Forest Agenda?

until the dreaded words "Enoch Powell

Oh? what's up with that then? Enoch Powell is recognised as having been pretty much a genius and all I can think is that read "Enoch powell" and then realised you aren't even qualified to judge the man

Nabarro was well thought of in his constituancy - subsequent to his successful appeal against the driving conviction he said that justice was available to everybody in the UK - provided they were rich! He supported the Severn valley railway, being a steam enthusiast all of his life, he always ran Daimler'Jags and he had reg Nos NAB 1 etc. He was always one of the first MP's to enter the house at the commencement of a new parlimentary term. He was first & foremost a Charactor! RIP>

Unsurprisingly Nabarro's 'buck', nseEResetc. statement understandably guaranteed him notoriety and a deeply reactionary label. What is often totally forgotten is the fact that he was way ahead of his time in terms of international public health with his successful parliamentary Bill for health warnings on tobacco boxes; other countries followed. Ironically,smoking lobbyists represented the move as 'nanny-state in action'.

"Behind him on the court steps," the Times reported after his second trial, "Miss Christine Holman, his private secretary, wept." What happened to Miss Holman? She married an up-and-coming young MP, Neil Hamilton, in 1983.

Gerald Nabarro is interviewed here in this Panorama edition from 1967