Last week I came across a box of truly horrible books, half-consumed by mould, with a forest of spores clinging to the cloth covers. I always try to clean books and have acquired an arsenal of weapons that include a paint brush, playdo, Mr Sheen, isopropyl alcohol and yellow dusters, but these titles were beyond help. I quickly consigned them to oblivion.

The next box didn't look very promising either, but one battered hardback caught my eye and I decided to have a look. It turned out to be a collection of stunning A4-size photographs of the French Riviera in 1900, collected by a woman named Alice Salmon. I Googled the name, but Alice Salmon has disappeared into the ether.

Here is a selection from Alice's album. Thanks to the size and quality of the images, I have been able to enlarge some of the details: 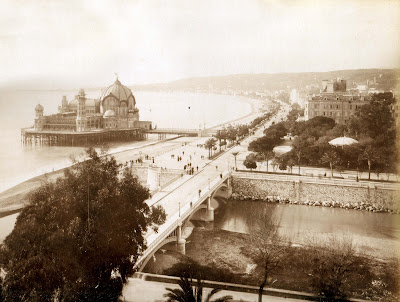 Nice, circa 1900. I have never been to the French Riviera, but in an ideal world I would go there as an aristocrat in the late-Victorian era. I would call myself the Comte de Lewes. 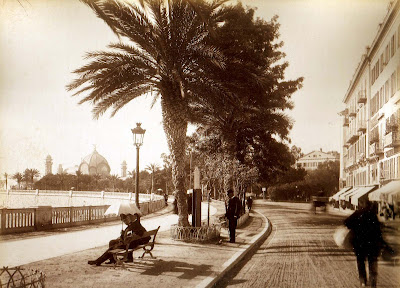 Another scene from Nice. The two men sitting on the bench are looking at the photographer: 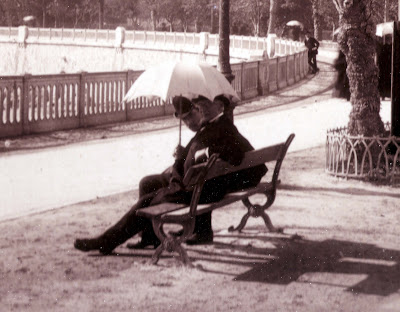 Unfortunately we cannot see their features properly, but the above detail reveals a third man. 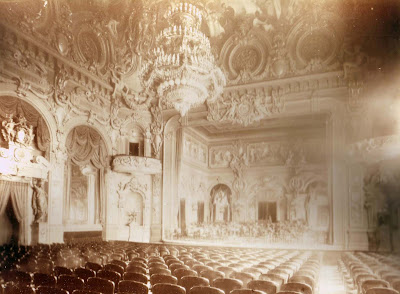 A night at the opera in Monte Carlo 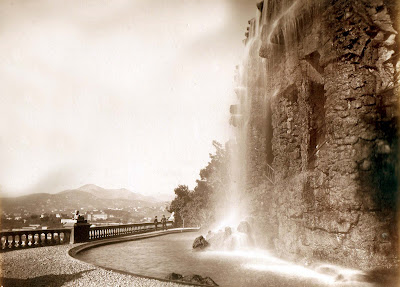 Here is the beautiful Cascade de Chateau in Nice. If you look carefully, you'll notice two figures in the background: 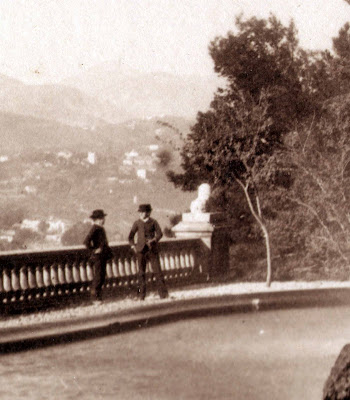 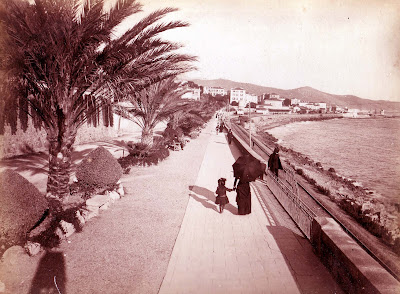 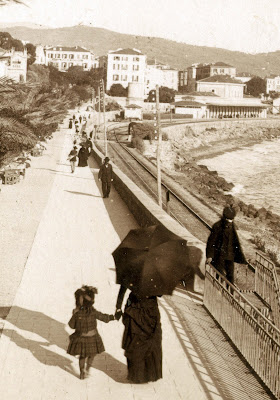 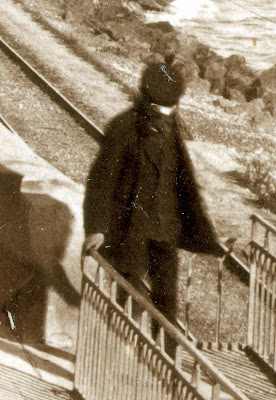 Who is this sinister Scratchman figure?
(It looks suspiciously like Michael Jackson) 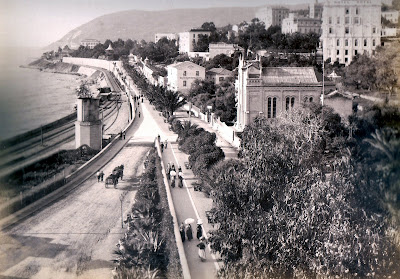 The album contains some wonderful images, but for me the whole experience is tinged with regret. I will never be able to visit the French Riviera in 1900. I will (probably) never know who Alice Salmon was and the figures in the photographs, from the unsettling Scratchman to the two curious gentlemen on the bench, will remain a mystery.
Posted by Steerforth at 8:27 pm

Reminds me of relatives that went and saw New Orleans before the levees broke and French Quarter flooded. You can never return.

Lovely photos, though I must confess not knowing what a "Scratchman" is.

As a student I knew a girl who lived in Norwood, renting a room in a large Victorian house - the very elderly lady owner lived upstairs. There was an outhouse - inside were about a dozen traveling trunks and cases. She had been on a 'Grand Tour' for her honeymoon at the turn of the centuary - and on return - just dumped her luggage in the outhouse and forgot about it. The whole lot was ruined, a pulpy mess of mould, fungus and rust.

In amongst the rotted silk gowns, mouldy hats and parasols were dozens of souvenier albums and guide books like these, all ruined and falling to dust. It was heartbreaking. ( there were also dozens of Louis Wain prints,and a whole trunk of Chinese silk with vivid colours but home to dozens of mice )

The French Riviera was beautiful but terribly full of people when we went a few years ago - we did have fun going round the Grand Prix circuit (it was the week before the race and the grandstands were up) in Montecarlo though.

Those photos are brilliant, I don't know what a scratchman is either - you're going to have to tell us. Although it was written later - they reminded me of Tender is the Night - which is mainly set there.

'Scratchman' is an old word for the Devil, but has also been applied to scarecrow-like figures.