"Midlist is a term in the publishing industry which refers to books which are not bestsellers but are strong enough to economically justify their publication (and likely, further purchases of future books from the same author. The vast majority of total titles published are midlist titles, though they represent a much smaller fraction of total book sales, which are dominated by bestsellers and other very popular titles." - Wikipedia

It used to be said that books were contra-recessionary items. The logic was that if people cut back on luxury goods, meals out and holidays, then this was good news for the book trade. However, judging by recent events in the book world, this is no longer the case. The recession has finally hit the publishing industry and there are rumours of an imminent cull of midlist authors.

Who are these midlist authors whose books don't really sell? I have struggled to think of some names and perhaps that's part of the problem. Besides, if I start mentioning names I'll probably get comments like this:

"X continues to write fiction, nonfiction, scripts for film, and this year a play of his was staged in London. He has won numerous awards and his novels continue to be reviewed with high praise. Notably, X, published this year in the States and, I believe, in the UK in 2006. He teaches at X University. He has a website. One of the best writers working today."

I have mixed feelings about the midlist. On the one hand, as a bookseller, I found it quite soul-destroying to be shown one novel after another by an author whose books never sold. Why were these titles being published? I often asked the sales reps and the answers I got ranged from 'library sales' to a hand-wringing 'I wish I knew, mate.'

But one the other hand, thank God that publishers support their authors. I remember when Ian Rankin was a midlist crime novelist, loved by his readers, but never reaching the bestseller lists. Rankin had been writing the Inspector Rebus stories for ten years before he became an 'A' list author.

Only a few authors are overight successes. Most take years to find their voice. The traditional role of a publisher was to recognise talent and nurture it. In today's climate, there is a danger that a culture of short-termism will rob us of some of the next decade's most interesting voices. 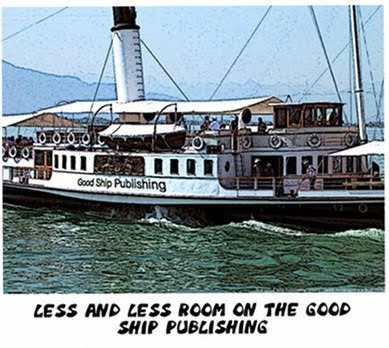 Posted by Steerforth at 7:29 pm

I hope to God that there's not too much of a cull--I suspect many of my favourite authors would qualify as mid-list types: the sort who turn out a great book every three years or so, which gets one positive review in a second-tier paper and no other notice, and whose backlist falls in and out (mostly out) of print without any apparent logic.

Most of the best authors are midlist, if they're lucky. It's strange how writing is so dependent on market forces, whilst classical music and art is recognised as elitist, but worth supporting with state subsidies.

Twenty years ago I read an article by Charles Platt in Interzone on the death of the midlist. As an example of a midlist author he gave Philip K. Dick: strong following within the field, never made much money but kept getting published. Hailed as a genius today.

In his memoir The Imaginary Girlfriend John Irving says that his publisher - or was it agent? - admitted that he would probably not take Irving on, were he starting out today as he did in the '60s.

Philip K Dick? Yes, I suppose he is a classic midlist author.

The post-midlist literary world is looking bleaker by the minute.

A bit like record companies previously supporting and nurturing bands I guess. Or producers nuturing comedies beyond a ropey first series.

Both things which seldom happen now.

My friend Helen Rappaport however is finally thriving after 20 or more years of penury and hard slog. Thanks to the American rights of one of her history books, she is finally 'comfortable' financially - a miracle she fully appreciates when most authors - even previously successful authors are getting turned down flat at the moment unless they are Dan Brown.